Work continued in the backyard – a space we never utilized or gave much attention in the past.  Let’s start with a fence, a neighbor’s fence.

We never considered installing one, never really thought about one, but are working with one the neighbors installed some time ago.  The only thing we did over the years was to give it a little extra feature – oyster shells along the bottom.

It wasn’t really any plan put in place, just a place to dump shells after consumption.  Eric went through a phase (when he could get them) of locally purchasing Apalachicola oysters, by the bag – 60 lbs each time.  He shared them amongst family & friends, waaaaaaay before I started eating them.  Over time, the fence line got looking kind of rough and oyster shells mysteriously ‘migrating’ into the yard.  man – what a noise when the lawn mower hits one.  Three days work – off and on – gave it some needed attention.

First step in the process was digging them up from being buried and creating an established starting point at the top of the hillside.

Eric washed off the dirt, taking a break from digging.  Yes, this was a team project.  He walked over and starting digging.  🙂

Then the magic ingredient – bleach – used on the fence and the oyster shells.

Wow – it made such a difference……….on a neighbor’s fence. Ha!  At least the side we see now looks good.

You may have noticed a wire circle in the photos above?  This is something we’ve talked but was really near the bottom of any list – a compost pile.  We had one at the far back corner of the yard.  There’s a lovely photo below. 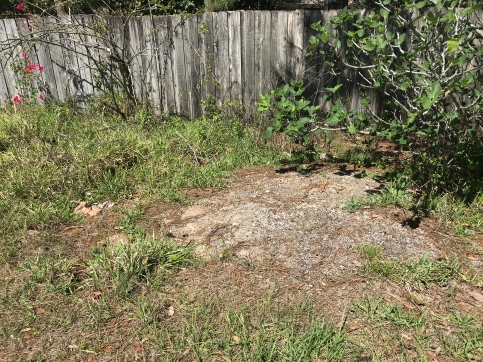 Yeah, it doesn’t look like much and truthfully, it was abandoned by us.  I’ve been bagging up all of our yard waste for yard pick-up.  Another name for compost is ‘black gold’.  Do it right and yard waste becomes a GREAT addition, adding nutritional value to any plant bed – free!  It was time to make a convenient and workable compost area.

There are all kinds of fancy compost bins for purchase and DIY.  Eric bought some hardware cloth – really, what a weird name for wire fencing – and built our own.  Fencing and zip-ties were only the only items needed and were in the garage.  Yeah! Free – kind of.

Throw in yard waste, a little soil now and them, sprinkle with water and occasionally take a shovel to ‘turn over’ the stuff for aeration and you will have some fine-looking compost!  Doesn’t this look so much nicer that a weedy pile of dirt in the corner?

Like a number of furloughed people, we started a small garden.  Actually, it was a re-start since the garden plot already existed.  Found some new and old seeds and said what the heck, let’s see if they sprout.  Carrots did not (old seed), radishes did (new seed) along with the beans.  We’ve got a great start thus far.

Let’s talk trees.  They are blocking the sun for my garden.  We are NOT paying for an arborist to come and trim trees, so we did a little work ourselves.  Eric started out with a pole pruner. 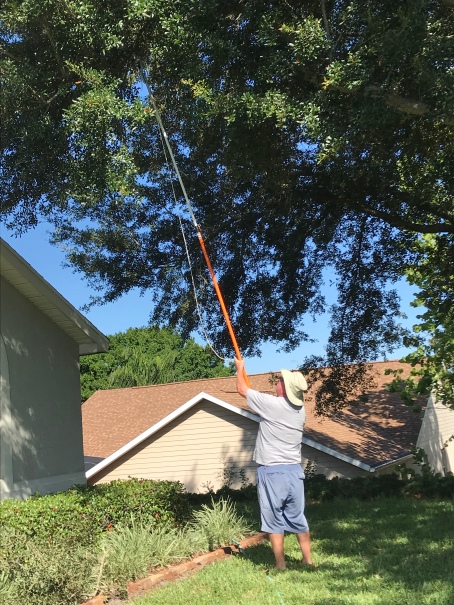 Then we went back to our ‘tried and true’ G&E technique:  I grab a branch, pull down as far as I can, Eric uses loppers and voila!, the trees are trimmed.  Hard to get a photo since we’re both involved but here you can see the results.

The backyard is also where I store my tomato cages – which I use for way more than tomatoes.  Several years ago I ran across some cool-looking painted wire cages.  What!?!  they are charging how much?  For a cage that normally costs $1.15 sans paint?

No way am I paying that much furlough or not.  A few cans of spray paint works wonders.  Again, already had in the garage.

They almost look like abstract art when done and stored along the fenceline.

Speaking of art……………….we’ve had this glasswork flower art for a number of years, plopped down in the back yard.  We positioned it so now it looks like it’s growing out of the bushes and finally found a place for the glass butterfly that was part of the deal.

It was originally a magnet, but a metal hook and some duct tape lends itself for outside beauty.

I’ll close this post with a real butterfly.  While we were working in the back yard, this gulf fritillary butterfly was foraging on some wild passionflower sprouts in the yard.  Love seeing native wildlife. 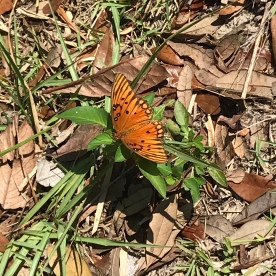 One thought on “Darden’s Backyard 2.0”