Here’s a shot of the volcano that made headlines in 2010 when the ash plumes were so high they interfered with international traffic to Europe.  Eyjafjallajökull.

We stopped at the LAVA Center in Hvolsvollur and by the time we left, I was pretty impressed with their exhibit.  Every museum/exhibit is pricey and (luckily) only a few times not really worth the kronor being spent. 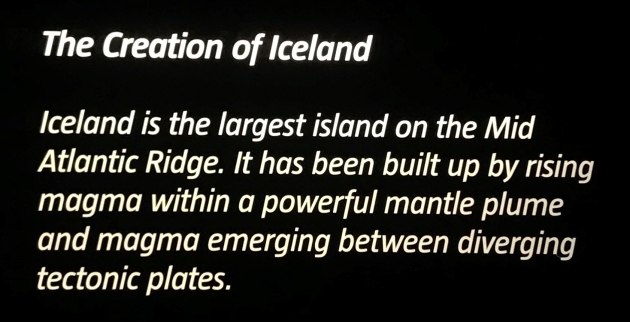 Viewing a film started our visit, but if given the choice, I would not watch it again.  Just not much to it – no depth.  We walked into the actual exhibit and several of the ‘rooms’ were interactive.  The hallways connecting the rooms also had sensors and caused a surprise the first time, with loud noises and shaking simulating an eruption.  The last room had three walls, floor-to-ceiling screens of Iceland volcanos. 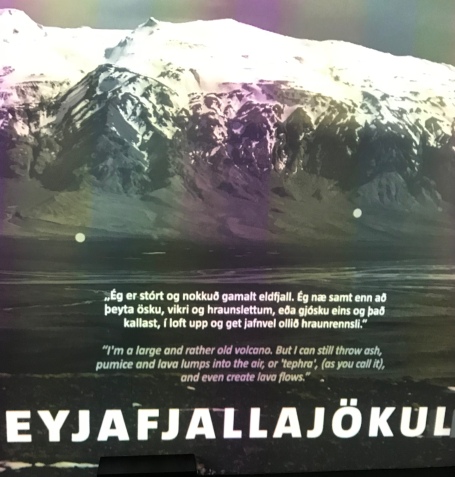 Notice the white dots on the screen?  We didn’t initially.  Then we saw the diagram pointing.  There were sensors that followed your ‘point’ and more info popped up on the screen.  Pretty neat!  I had to go back to the first screen and find all of the dots and take myself around the room again. 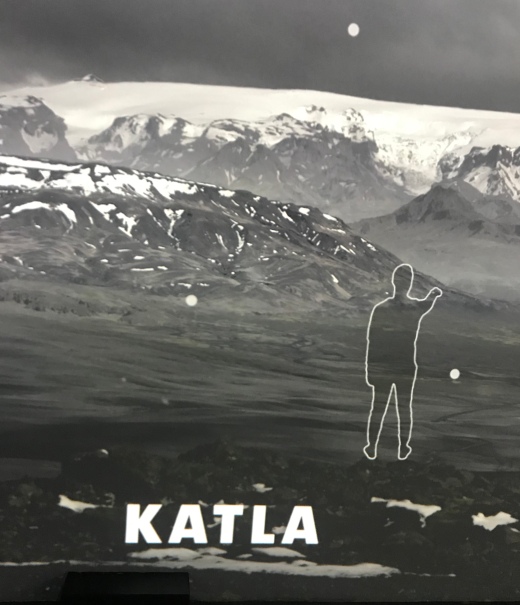 We were told that the Katla volcano is 100 times larger then the Eyjafjallajokull volcano. WOW.

The photo below is interesting.  Every two minutes they have a seismic map in their exhibit which updates indicating  ‘real time’ earthquake occurances in Iceland.   Most of these are never felt.   Yes, this map shows the south coast of Iceland, where we’re going. 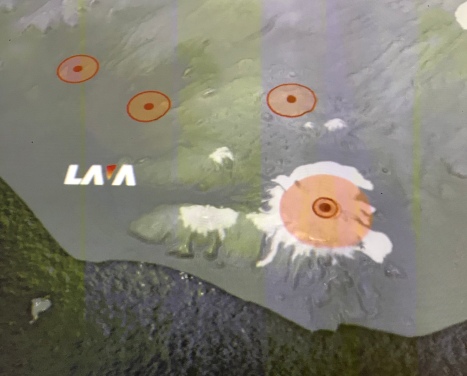 Out of the fire……………….into the water, the Seljalandsfoss waterfall. 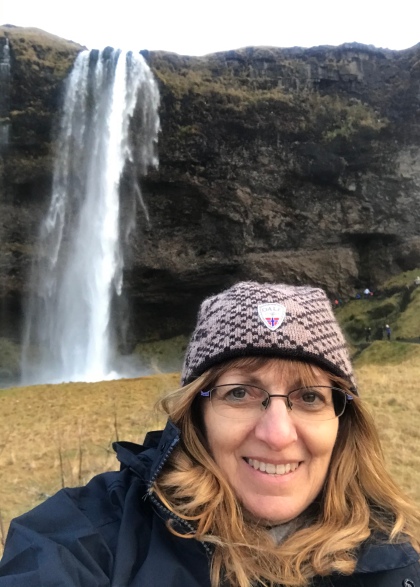 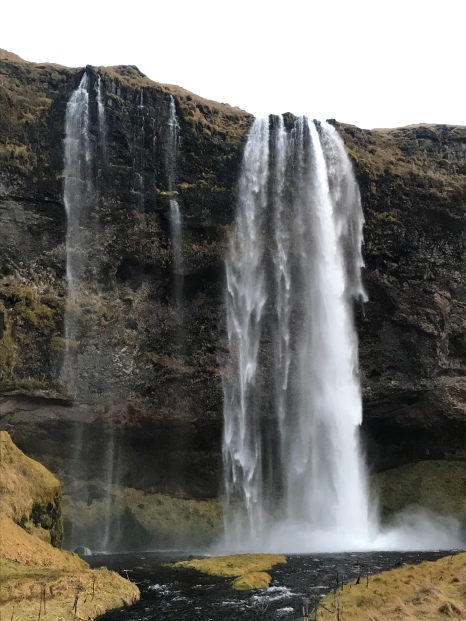 A short flight of wooden (wet and slippery – just saying) stairs were to the left of the waterfall and I found this sign. 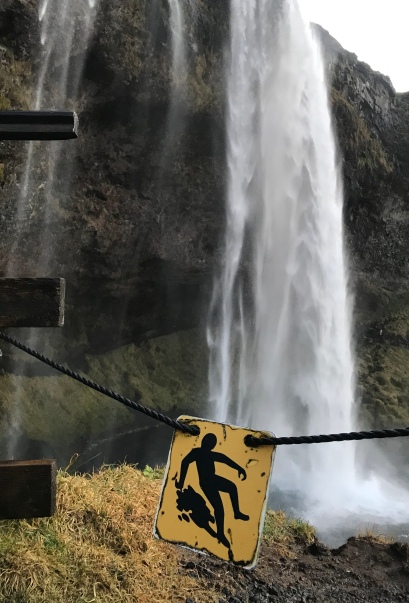 Hope you can see this video.  It gives you 7 seconds of pouring water.  Behind it you can see people on the trail.

One last photo of the waterfall , with my friend in the background.  🙂 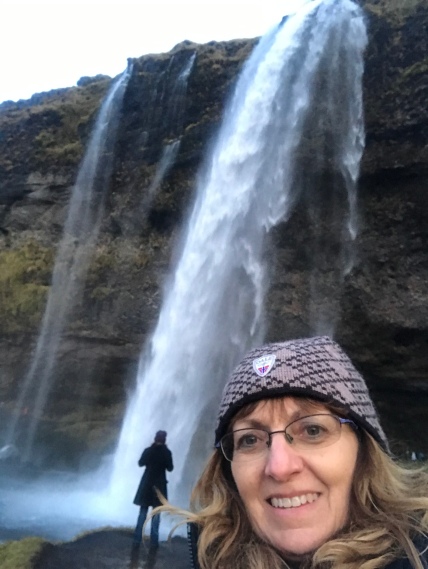 Giving you a short break from nature.  We stayed in an AirBNB in Vik, using the town as our jumping off point for activities.  Eric and I have stayed in these in numerous countries and have not had a problem yet.  Keeping fingers crossed.  With the short days in Iceland, it was dark when we arrived.  We knew the street, but no number.  We kept driving (only one turn-around needed) until I found the place from the photo. Trust me.   It was much darker than the photo shows when we arrived.  I took this the following day. 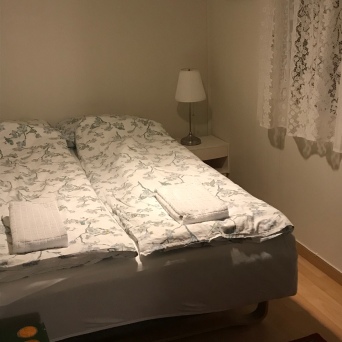 We each had our own bedroom, but I only captured one shot.  It was pretty chilly inside when we arrived.  We looked for a thermostat and soon found individual wall heaters in each room.  They were turned up on high – quickly!  We both went to bed with extra sleeping clothes on.

Vik is along the coast with a black sand beach from the volcanic rock.  Ten minutes away was ‘the black sand beach’ that everyone talks about.  After parking and walking a short distance, here is your first view.

This area is noted for the volcanic basalt columns.  I left the lady in the photo for size comparison.  No, people shouldn’t really be climbing on the columns – tourists. 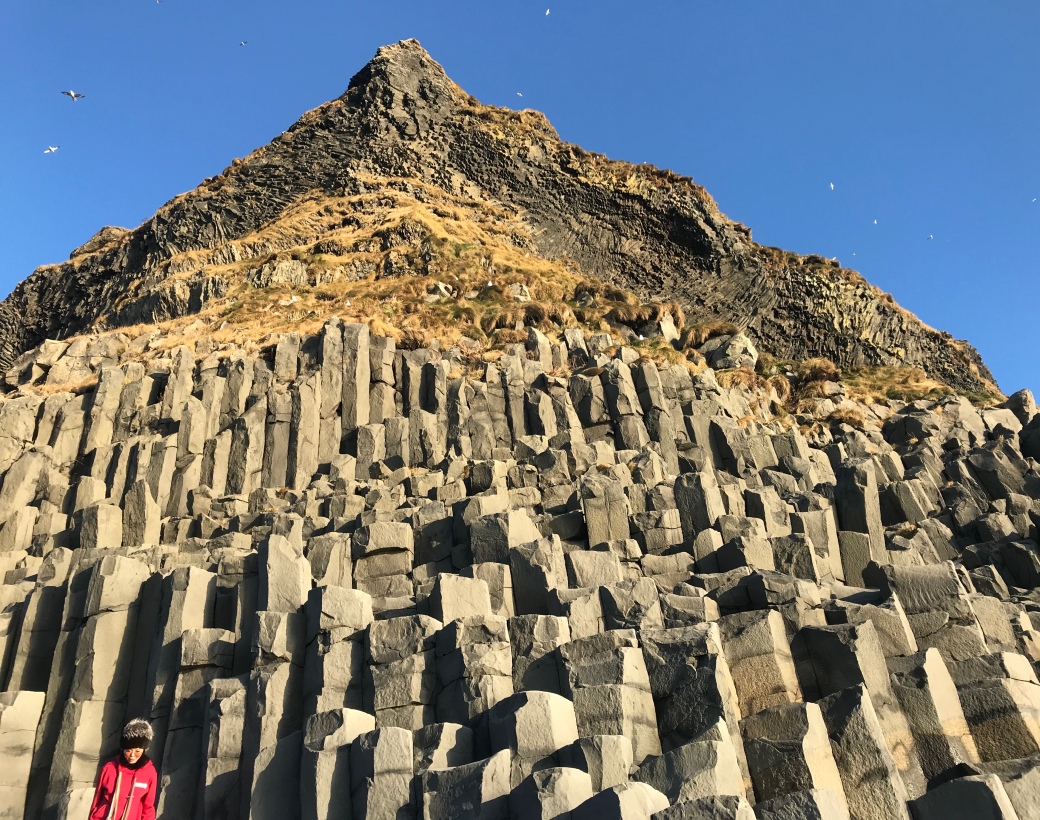 Walk around the corner and more basalt columns can be seen, along with this cave.

Eric made Adrienne promise to keep an eye on me so I didn’t get caught in ‘sneaker’ waves.  Apparently every 8th (or so) wave can become particularly strong and catch people unaware.  The wave below was noticeably bigger than other ones. 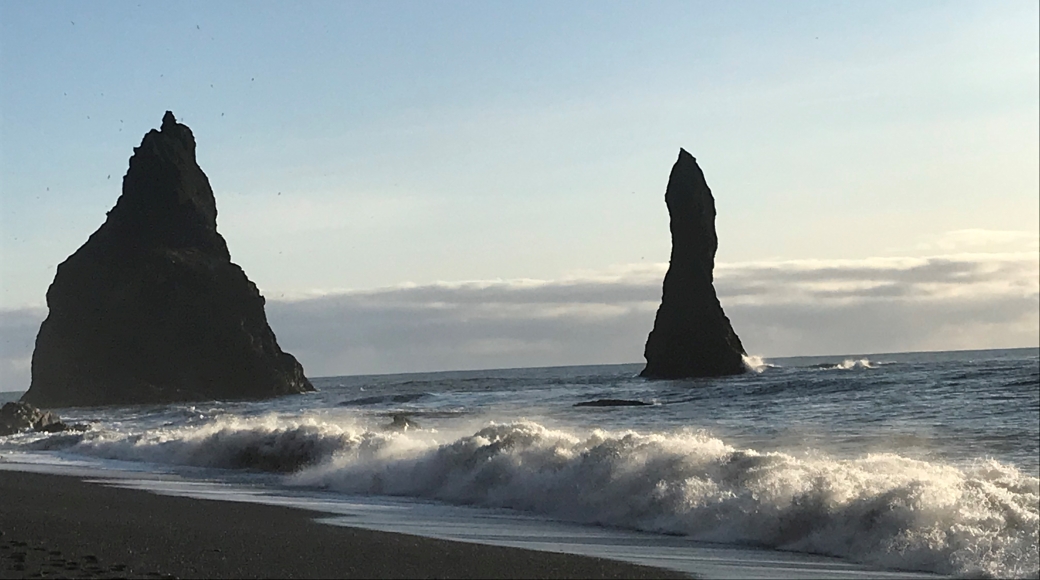 These warnings are seen walking to the beach.  People should not ‘Follow the Leader’ as the sticker indicates below.  They need a new sign.  Or at least, people should read the board next to this sign as seen in my next photo.

And unfortunately, this has occurred more than anyone wants. 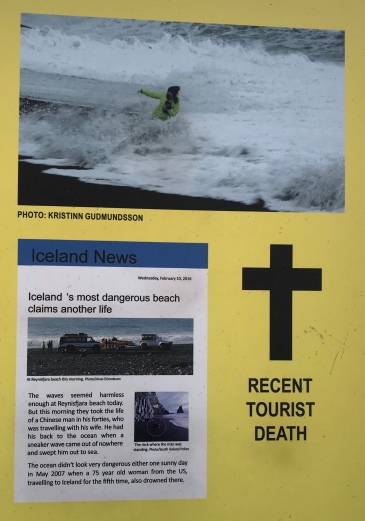 I was reading the signs and another tourist said earlier this morning his group saw some young adults get hit with a wave that came up mid-thigh.  They were safe – this time.  I (literally) just read that another tourist was injured on November 11, 2019 when toppled by a wave, but managed to grope his way back to shore – with a shoulder injury.  Yikes!

This area is not actually part of Vik and we had to drive on the other side of the mountain to get there – 10 minutes.  It is part of a town called Reynisfjara.  There was a lovely old church, visible from the main highway (Ring Road 1) that gets lots of photographs.  It is pretty typical architecture but usually surrounded by homes and not the nearby graveyard.  We couldn’t resist a photo stop also.  I tried to find more info on the internet about the church, but only got ‘lovely’ old church in Reynisfiara.  I wanted to know more.

Another thing we noticed.  Once darkness arrives, churches are spot-lighted and can easily be seen from miles around – a beacon of light for all.

Going to’ the black sand beach’ was another things to  √  off my Iceland list.  Stay tuned.  Next up is something I love doing, but very few have done it……….in Iceland.