This will probably be one of my shortest posts ever!  We just heard about this new dining spot in Clermont and one day later, we stopped in for dinner on a ‘date night’.  While the location is nothing special, in a strip mall with a sports bar around the corner, I liked the atmosphere and décor inside.

When we first arrived there was a large group of ladies (at least 20), celebrating the holiday with a number of tables put together.  Yikes.  They had enjoyed their evening and were a bit noisy. Good news for us…….they were eating dessert and within a few minutes started to depart.  Whew!

Talking to our waitress, we discovered they had been open less than 2 months.  My only worry is that Clermont won’t embrace the concept and they won’t be able to stay open.  The above photo was taken after our dinner (on a Friday night) around 7:45pm. 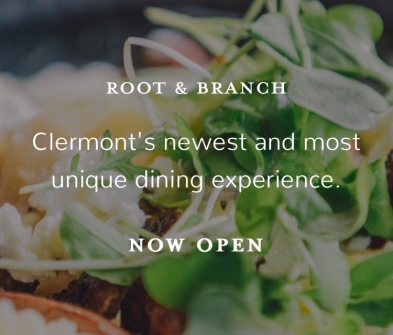 Their goal is to deliver locally sourced food with integrity in an inviting and service oriented atmosphere.  That nugget of info was straight from their website.  This is a ‘farm to table’ concept, with them purchasing premium products from local grown farms, serving fresh and organic foods.

We started with wine – me a french white from Bordeaux and Eric a French red, Cote du Rhone.

We ordered a series of small plates to share and said they could come out as they were ready.  First to arrive was fried green tomatoes.  It was topped with boursin cheese, arugula and a sliver of red pepper.  The flavor combo with the toppings, really added to the overall dish.  Three slices were enough to share. 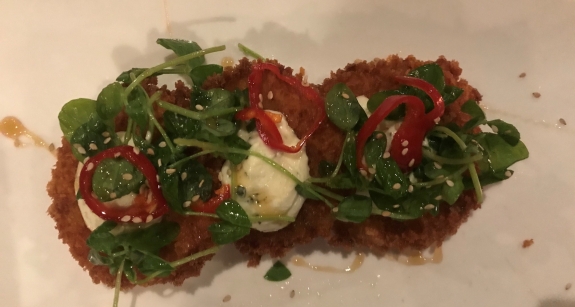 This was followed by pimento cheese hush puppies.  My first impression was huh, okay.  Then I dipped it into the accompanying sauce (tomato mustard) and it went up significantly.  Trust me-the sauce makes the dish. 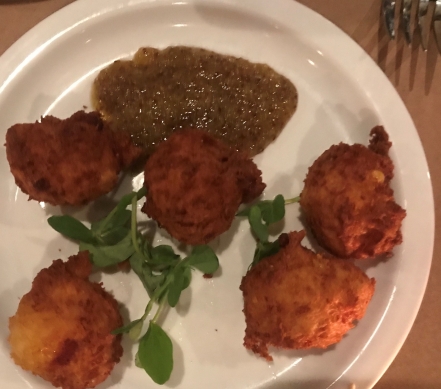 The best small plate were these pulled pork tacos.  OMG!  The flavor was perfect.  They were topped by pickled red onions and thinly sliced radishes – delish!

The tacos tied with dessert for being the best selection.  We selected the cranberry bread pudding.  I’m a big fan of bread pudding and having the cranberries included was a first for me.  The orange sauce surrounding the pudding was good enough to lick the plate clean.  The pink, cranberry flavored whipped cream was good, but not outstanding.

This is Clermont’s first casual fine dining experience and I hope it makes it.  The portions were spot-on, not too big but I’m afraid that too many Americans will not appreciate that fact.  If anyone comes to this part of Florida, please consider stopping for a meal.  If you don’t live nearby, think about visiting one of your own local places, especially if they source their food supply locally. 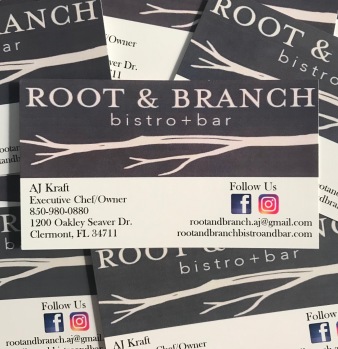