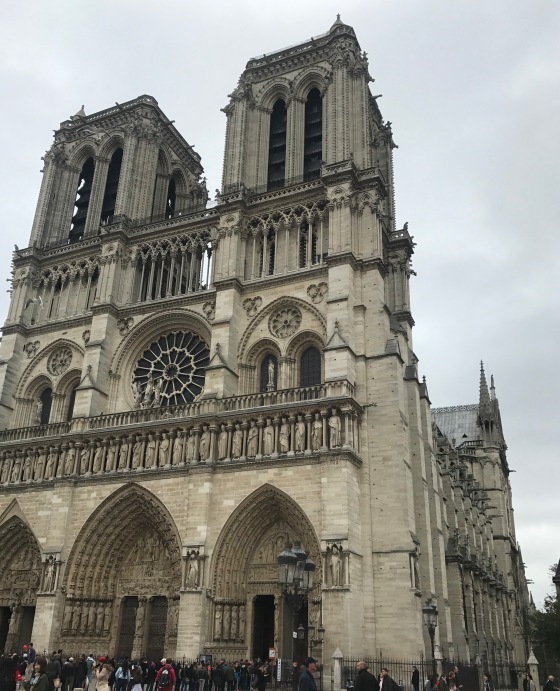 However, before going up, we go in, inside of Notre Dame.  Just wanted to include a few photos of things I found interesting.  Naturally on previous visits, I had noticed the rosette windows in the center of the church, particularly the one to the left of the altar.  It was the one rosette that was the most intact from WWII. 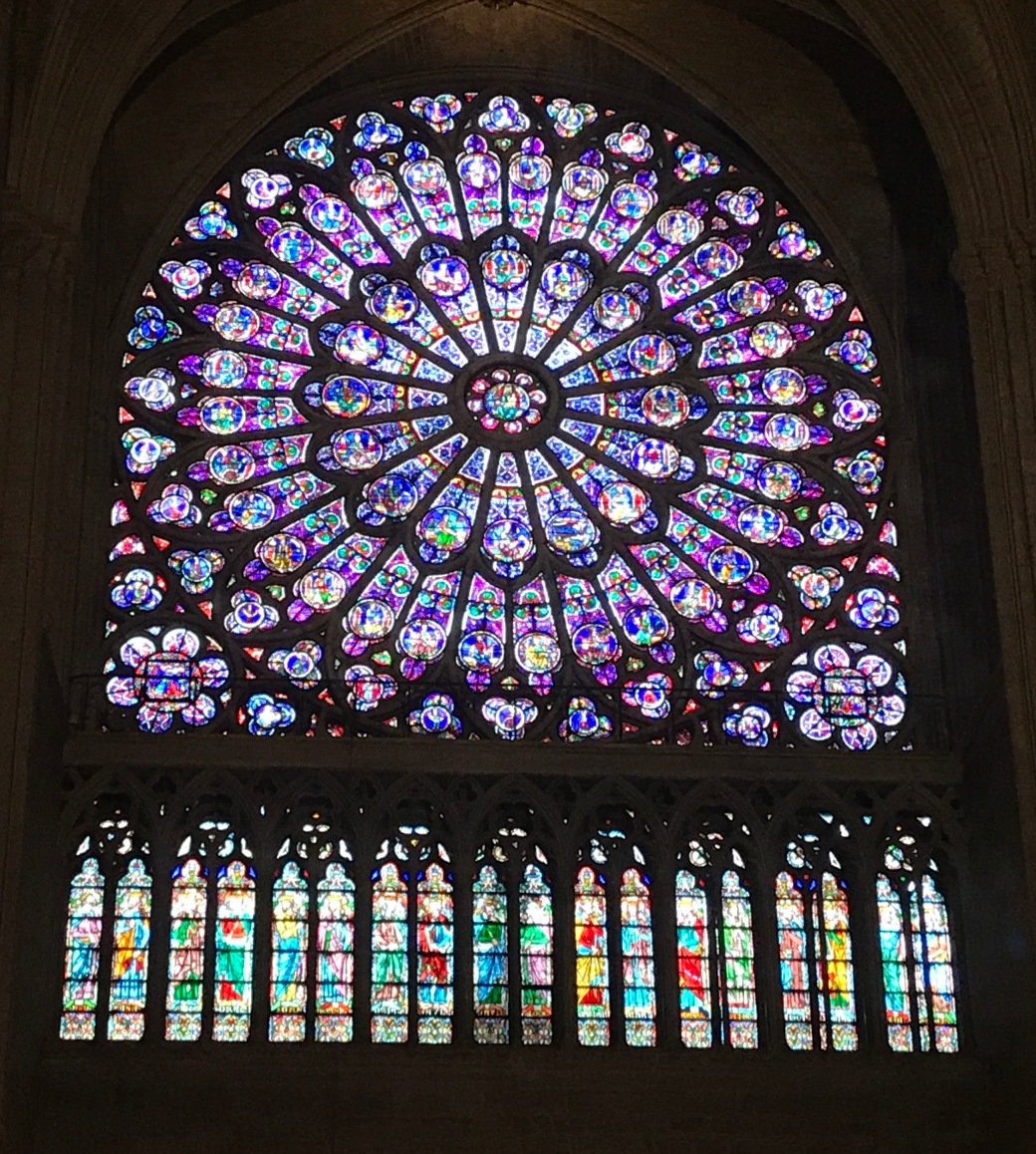 However, what I had not picked up on was that the rosette (bottom photo) to the right of the altar, catching the (new) morning sun was the New Testament stories. Thus making the one in the top photo the Old Testament since it catches the sun at the end of the day.

The two statues at the bottom are Mother Theresa on the left and Joan of Arc on the right.

There is so much detail and symbolism everywhere inside and outside of the church.  Reading skills in Medieval times was minimal for the poor so stories were shown through these sculpted reliefs.  In the photo below, it shows ‘Judgment’.  Underneath Christ there are two groups of people, those to the right are chained and heading to purgatory.  You can guess the other side. 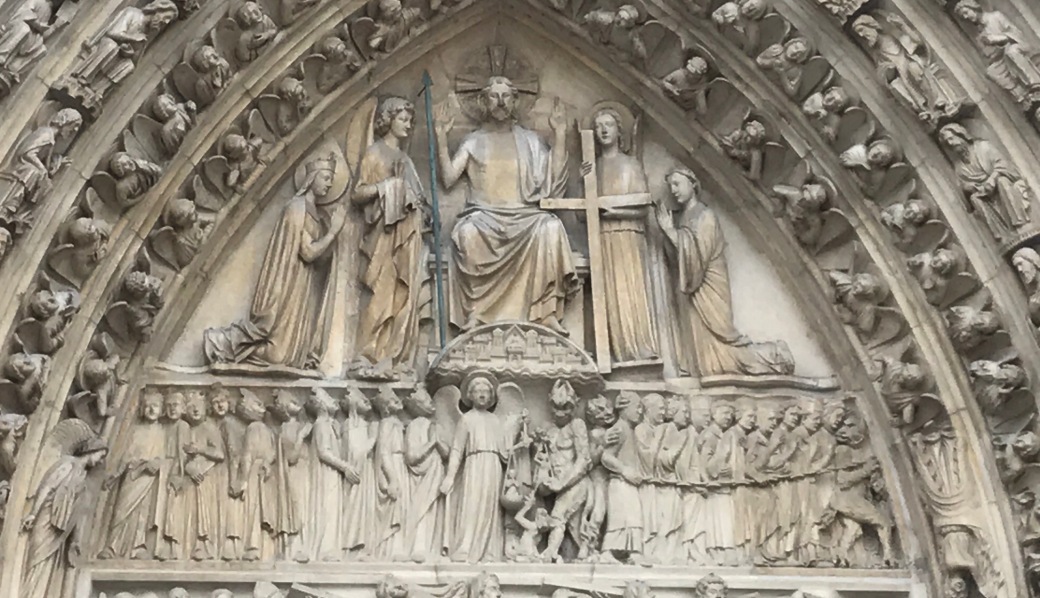 There is also the story of St Denis.  He was a 3rd century Christian martyr who was a bishop of Paris.  He became so popular that the Romans had him imprisoned and eventually beheaded.  Legend has it that after being severed, Denis picked up his head, walked several miles from that location.  Once he reached a spot that had Christian followers-apparently preaching a sermon along the way- he died.  I know, the tale is a stretch, but it makes a good story. 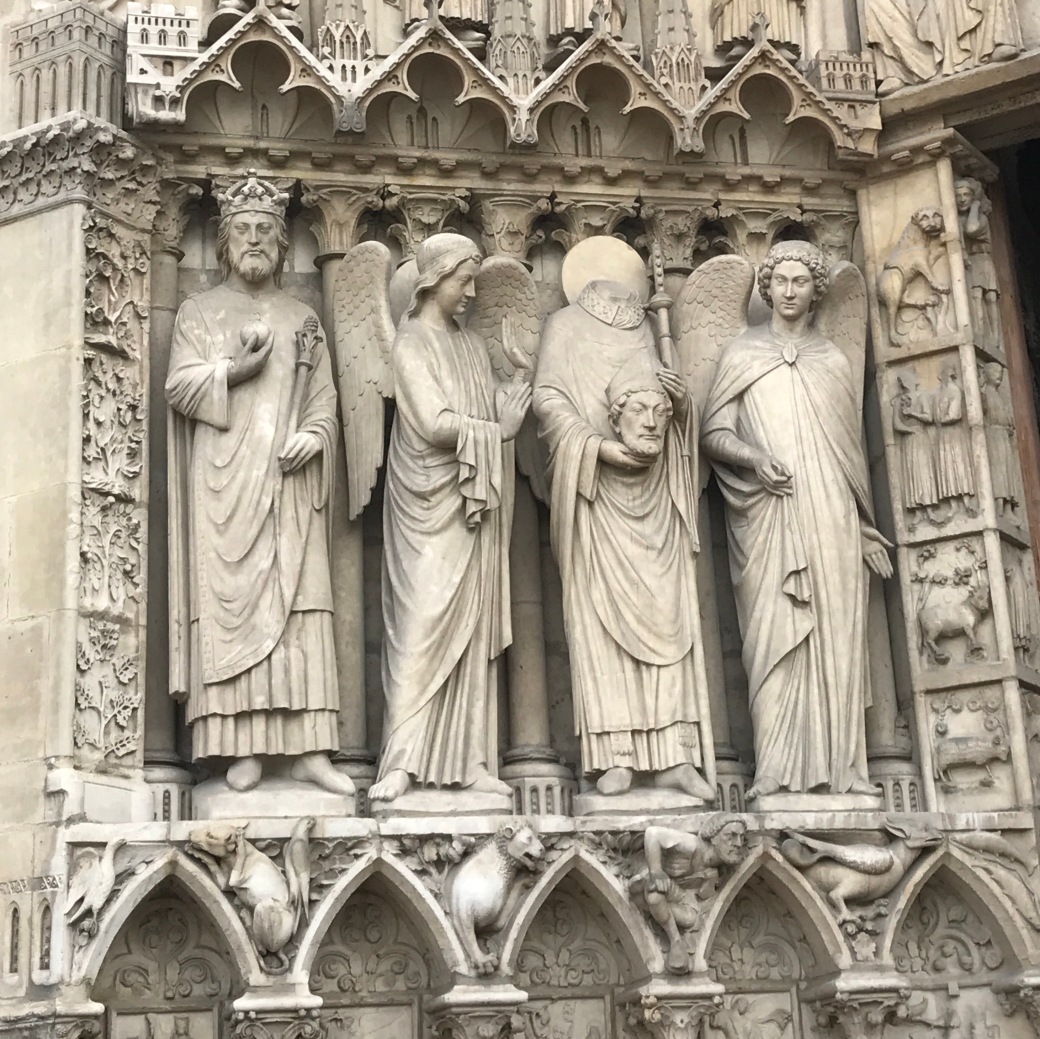 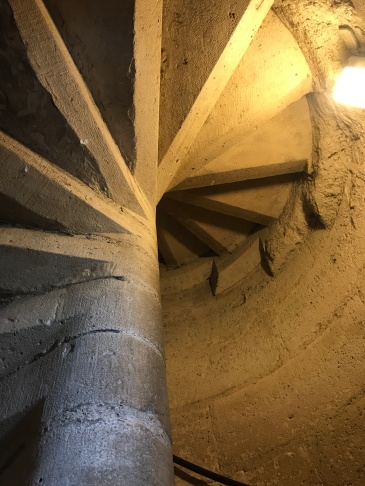 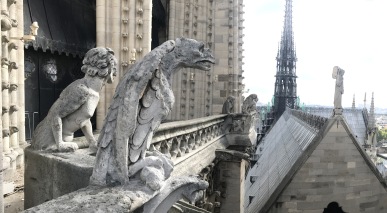 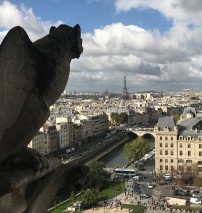 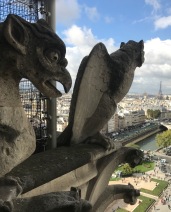 Another short flight of stairs and we were at the third level which had the bell tower. 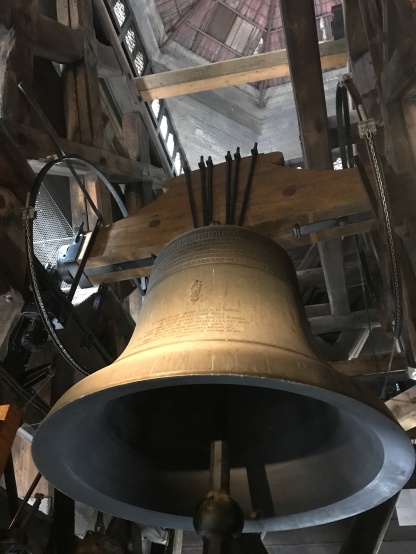 But there was one more flight, to the fourth level for our walking/climbing tour and this gave us great panoramic views of Paris. 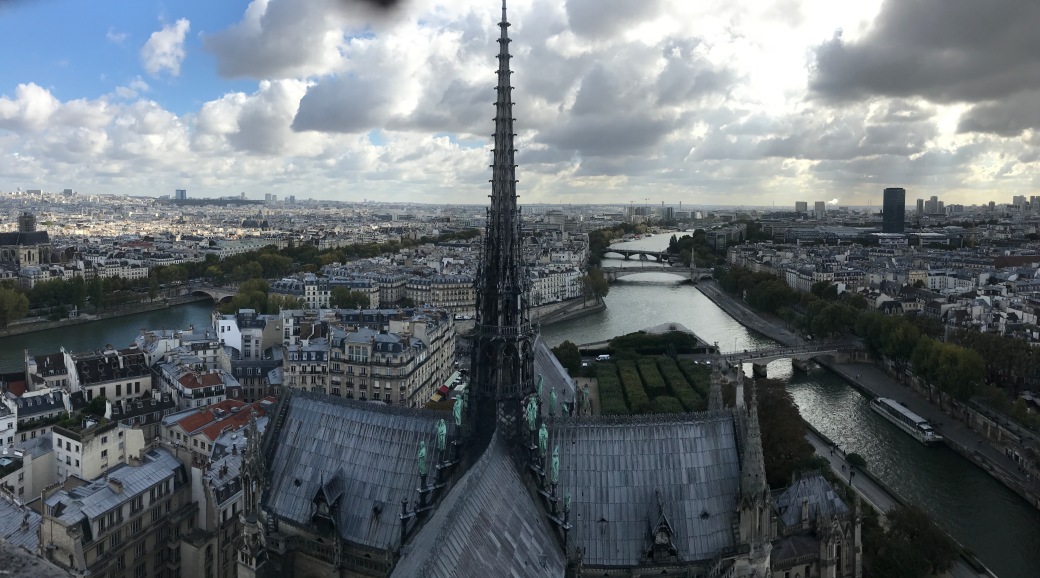 You might notice on the spire there are statues of saints and Apostles, looking out over the city, except one.  The person in charge of the renovation (Viollet–le-Duc) had one of the statues made in his image, and is standing facing the church to admire his work. 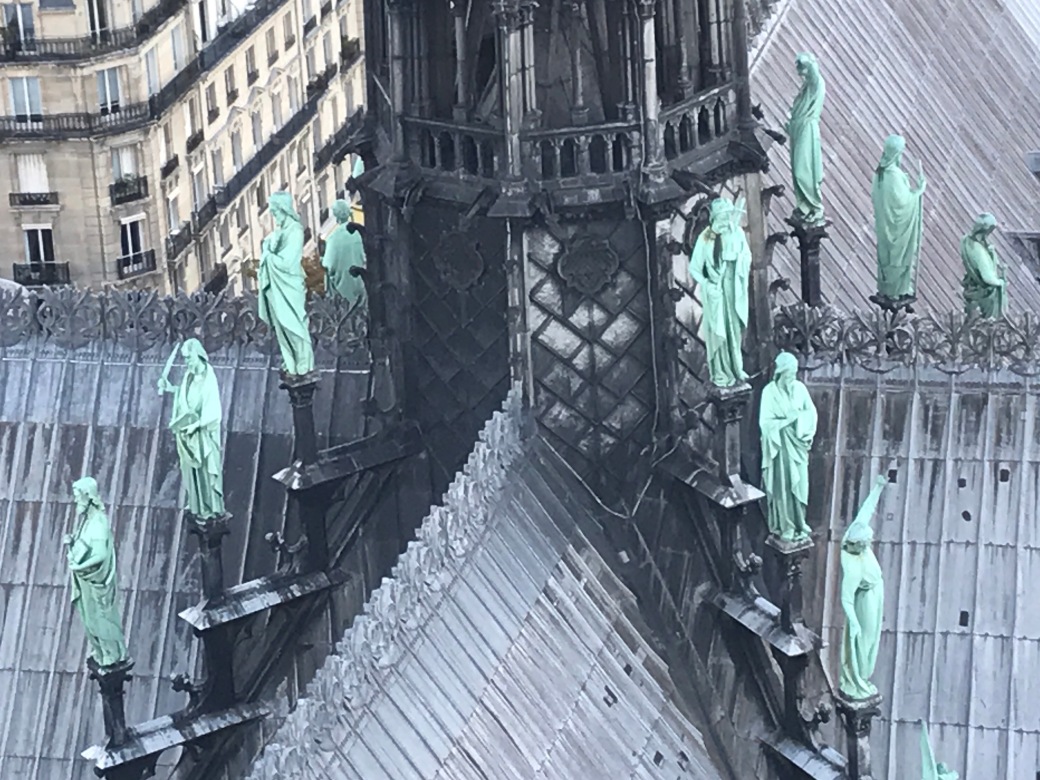 >hint at the bottom if needed<

But alas, we headed for the stairs to go down and leave the church. 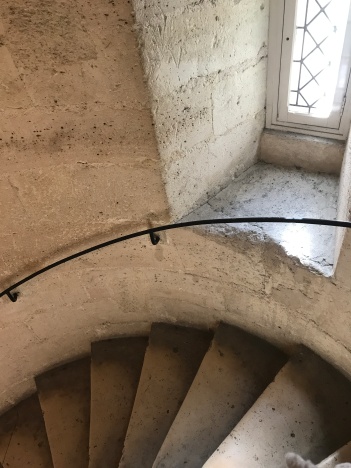 We can now mark this off my bucket list – check. 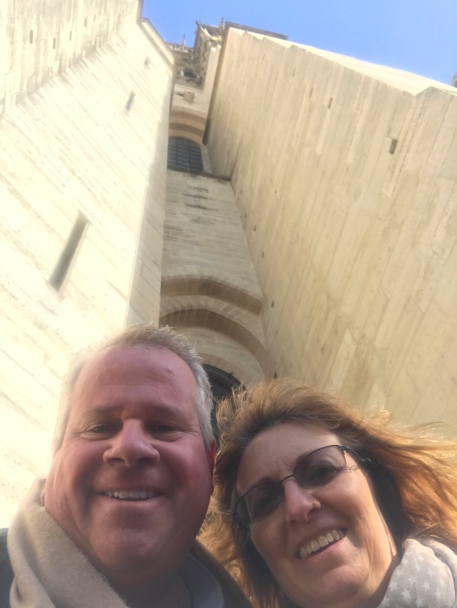 There were a few other sites included with this tour.  The place we started had more of the ‘love’ locks – which the city considers vandalism by the way.  The tradition is believed to have started by an Italian film in 2006.  With Paris being the ‘city of love’ couples would attach a padlock to a bridge and throw the key into the Seine river.  At one time, there were 45 tons of padlocks on the Pont Des Arts bridge and it was causing structural damage.  This photo below was near a park on the island, not that bridge. 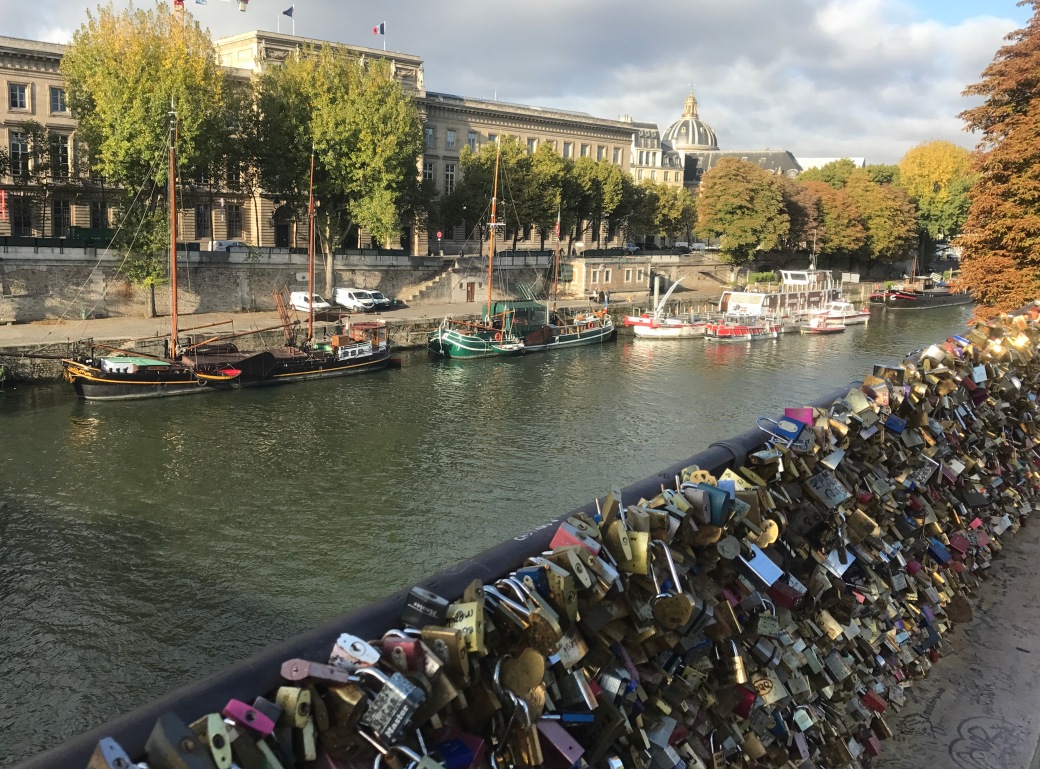 This building was on the island and during the French Revolution was the dungeon for Marie Antoinette.  Our guide said Marie was held here until paraded through the streets of Paris before facing the guillotine. 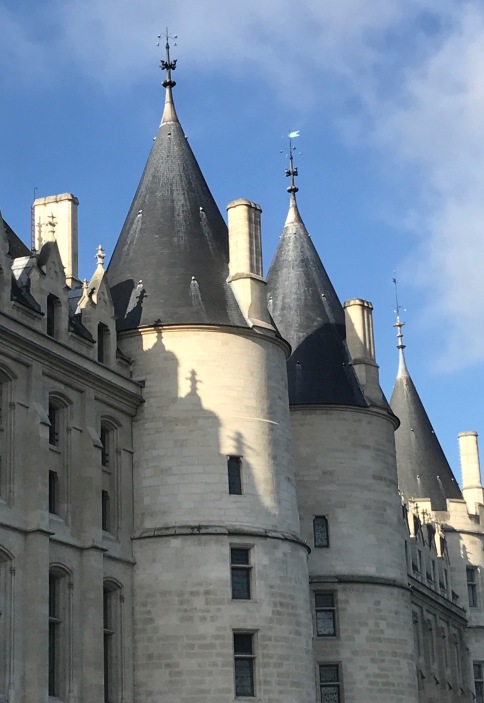 All those steps built up an appetite.  During our first Paris visit years ago, we found a restaurant recommended in one of Rick Steve’s travel books and it has become a tradition to have a meal at the Polidor. 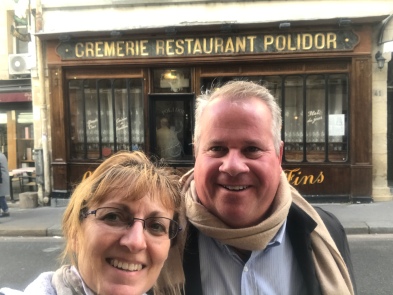 Going to spell it out now – I always get the chicken surpreme, hands down the best chicken in Paris (of course my opinion). I know, I know, not a ‘stunning’ photo, kind of boring with the white mashed potatoes,  chicken covered in a the tan/brown wine sauce (throwing in the green parsley for color ha!), but only one word needed………delicious.

Eric usually gets the country style foi gras, followed by the veal sweetbreads and wine tops off the meal. 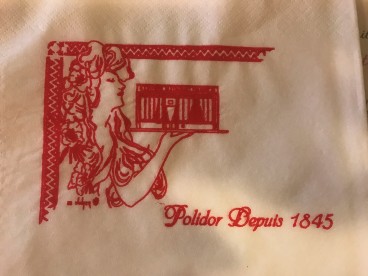 there’s at least one thing that has not changed since that time, the toilette.  It is a ‘squatty potty’ just like in China.  While I have a photo, I just couldn’t add it into the blog.  Nothing wrong with it, very clean, everything is appropriately functional, has rails for the ladies……….but still after the food photos, I just couldn’t do it.  Use your imagination or google it.

>hint – figure is on the right, his head is closest to the top of the photo<