We made every minute count for our last 24 hours in France.  Briefly the sites we visited and/or experienced  were (1) Eiffel Tower (2) Seine Dinner Cruise (3) Tuileries Garden (4) Champs-Elysses (5) Arc De Triomphe (6) Mini Palais Restaurant.

In years past, we had stood in line, took the elevator to the top of the Eiffel Tower and saw Paris from 906 ft above ground.  In 2015 it was the most visited paid monument in the world with 6.91 million visitors going up.  This time we didn’t go up, but admired it from various angles at ground level.  Yes, just walking around the area for 45 minutes there was a serious drop in the temperatures, hence the extra headwear. 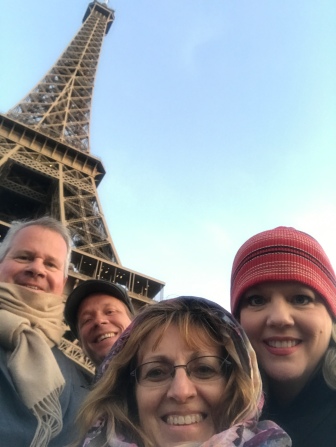 A lot of publications say don’t bother with the Seine River cruises, especially the cruises with food because they are over-priced and under-whelming.  However………..it had been on my bucket list.  Eric did tons of research on the internet, perused lots (hundreds?) of on-line reviews of various dinner cruises and found one that said ‘If you really want to do this on your trip to Paris, this is the boat to be on.’  It got good reviews for the cruise and the food – done.

Instructions were check-in at the boat dock at 7:45pm with a 8:30pm departure, dress code ‘smart-casual’.  We got on the boat, found our table and proceeded to enjoy the evening.

But even before departing, we started with Kir Royale and some fromage squares. 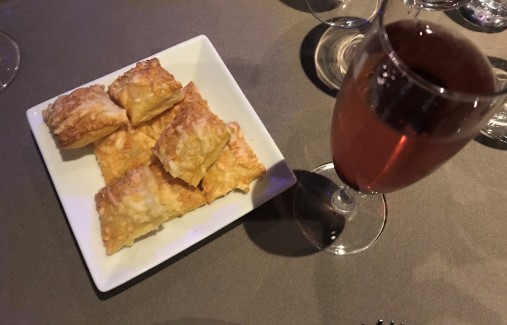 Our expectations were already going up.  Next were our starters (prawns & foie gras) then the main courses (duck & beef).  You’ll have to figure out who ordered each one.  🙂

At the end of the meal we had a choice of fromage (cheese) or dessert.  Eric chose wisely selecting the fromage.

While the food definitely exceeded our expectations, a primary reason for the cruise was the night-time views of Paris.  The cruise did not disappoint on that end either.  First was Notre Dame.

And as we turned around to go back, we saw a small version of Lady Liberty with the Eiffel Tower. 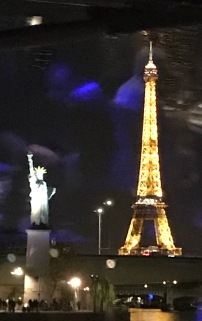 Before catching the Metro back to our respective abodes, we had time for one more group photo at the base of the Eiffel Tower.

Saturday was a day for walking.  Across from the hotel Alice & Bob was staying was the Tuileries Garden.  Created by Catherine de Medici in the mid 1500s, it eventually was opened to the public in the mid 1600s and became a public park after the French Revolution. 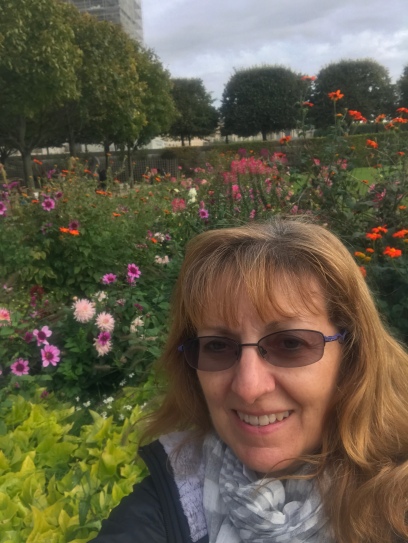 Researching on the internet the origins of the Tuileries Garden name I discovered…..’tuillerie’ were workshops in the 13th century which made tiles for the roofs of buildings.

This same research stated that in the 19th and 29th centuries, these gardens were the place that Parisians celebrated, met, strolled and relaxed.  It was no different today.  There were lots of chairs occupied by parents, as they watched their children play in the gardens, relaxing and talking with friends and neighbors. 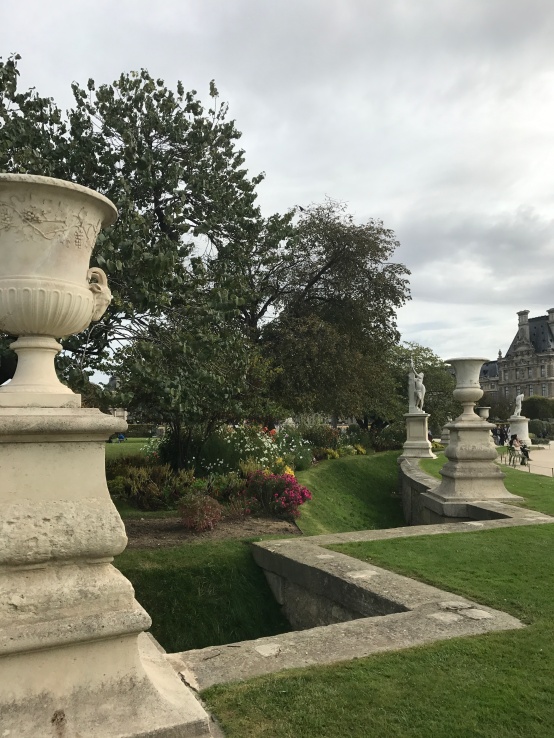 Okay, there was one strange thing we saw in the garden, this ‘bird frame’.  While none of us wanted to get close, I will tell you that the black ‘covering’ you see looked exactly like dead birds.  I’ve got nothing else to add – strange. 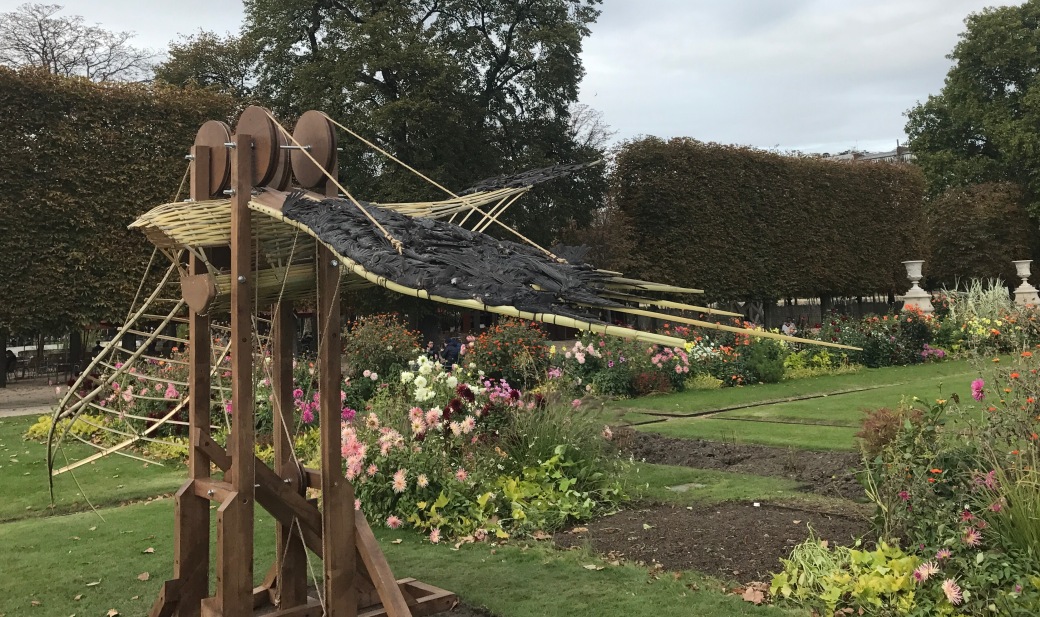 We continued our walk, going up the Avenue des Champs-Elysees ( 1.2 miles long) ending at the Arc de Triomphe.  We passed fountains and tree groves………… 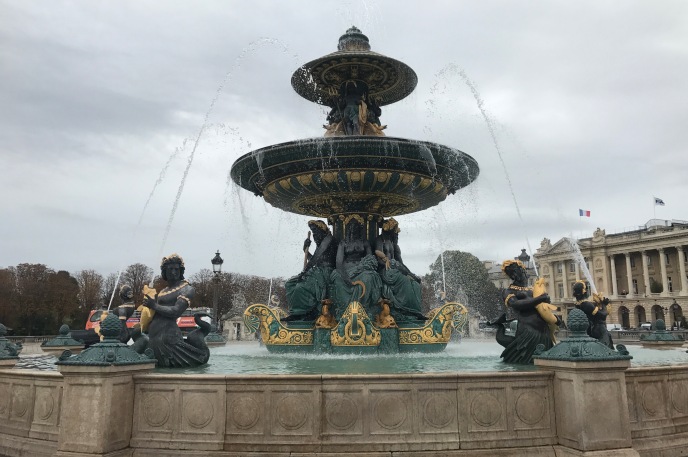 ……..and the Luxor Obelisk. It was gifted to France by the Ruler of Egypt in the early 1800s.

Throughout history The Avenue des Champs-Elysees has been the site of military parades and every year on Bastille day on 14 July, the largest military parade in Europe passes down the avenue.  It has been the last stage of the Tour de France and also popular for huge public gatherings such as Advent, Christmastide and New Years Eve.

The Arc de Triomphe monument was commissioned by Napoleon after his victory at the Battle of Austerlitz.  Althought it was not finished by the time Napoloen fell out of favor, it was eventually completed. 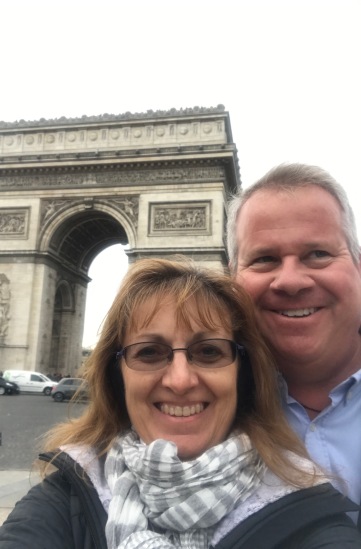 We headed to our final destination for that night’s dinner ‘Minipalais’.  Getting there we passed several ornate buildings, museums and monuments, one of which our restaurant was located inside.

Minipalais had creatively crafted dishes which also were quite tasty.  I didn’t notice until much later that  (1) I forgot to get a photo of the menu (2) their lighting was giving everything a blue-purple color and (3) makes the dishes harder to identify.

As this was to be our last evening together, there had to be one last photo (selfie of course) to commemorate the evening and our time in Paris. 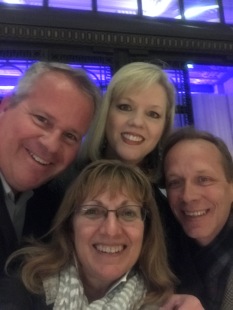 I’m closing this with a few final glimpses of the Eiffel Tower.  While not the tallest building in Paris, it continued to show up in photos during the week.