We’re ending our 3 week vacation being joined by Eric’s sister and her husband, Alice & Bob.  We met them at the airport, dropped off their luggage and the tour began!  They got a lovely hotel, right across from the Louvre.  We all had a quick drink to celebrate their arrival.

Alice had found a pretty neat place for a late lunch, but we introduced them to the Metro and saw Notre Dame before heading to the restaurant, Le Train Bleu.  Coming out of the metro, one of the first places seen is ‘Hotel deVille’ or City Hall.  It’s an impressive building.

However our first group photo was in front of Notre Dame.  Even though we are not Catholic, this is my favorite spot to visit in Paris.  There’s something that pulls me there time and time again.  We did a quick walk-through since the line was so short, but then got back on the Metro to find our lunch spot.

The restaurant was in the Lyon train station so when Eric and I arrived earlier in the week, we saw exactly where we would be eating.  It’s another impressive place.

It is truly lovely inside and has a lot of what I would call  ‘old world’ atmosphere.

The food was also an enjoyable part of the experience.  I ordered the Arts’Menu………

…………selecting the haddock & sea bream tartar, followed by the steamed lythe with risotto.  While both were good, the seafood tartar was absolutely amazing.  I could have made a meal with just that.  The slivers of grapefruit totally made the dish.  I would have enjoyed three times as much grapefruit as what was on the plate.  🙂

Eric started with the smoked salmon and it was followed by leg of lamb for his main course.

Alice ordered steak flambe and we had the ‘flambing’ occurring right at the table.  Her plate looked amazing, made me rethink my order.

The dessert I selected for my meal was the Rum baba – only because that was the only thing the waiter could describe to me.  Luckily Eric ordered something different because part of the preparation was pouring the rum on the cake at the table, and it was WAAAAY too much rum.  After two bites, Eric traded. 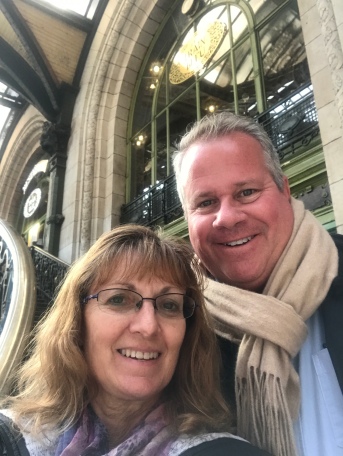 Alice and Bob were crashing from the jet lag (trust me, its brutal!) so we helped them get back to their hotel to catch up on their sleep.

Before heading back, we located the metro stop for the Fabric Market, it’s near Sacre-cour.  We stopped there on our last France visit and I wanted to go back to pick up more fabric.

Eric was a real trooper.  We had a general idea of what we wanted, but it still required a lot of walking around.  The place we visited had five levels with each floor carrying something different.  There was a multitude of store fronts that carry bolt after bolt after bolt of material, but this particular market was known for its wide variety.  After making our selection (Eric gave input) he looked for the ‘cutter’ that wrote our slip and cut the material.  It definitely helped that Eric could speak French!  Otherwise, we would still be there waiting.  FYI – we made an additional trip later in the week and let’s just say that packing all of our fabric purchases was a bear.

We booked a guided tour the following day (Paris Gourmet Food Tour of the Marais) and really enjoyed the experience.  The tour started at the statue near Notre Dame. 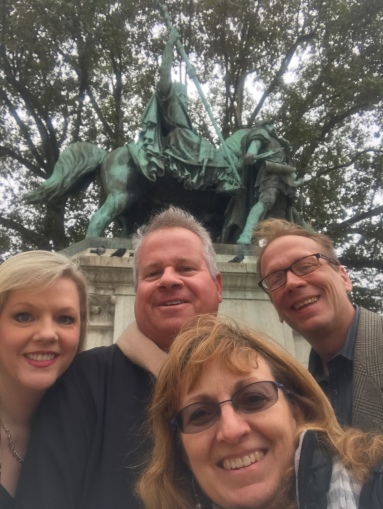 Our tour guide gave us some historical information about Paris before we set out.  She talked about the design of Paris, going away from the half-timbered buildings, which were prone to fires and kept the inner city a dark, dank place. 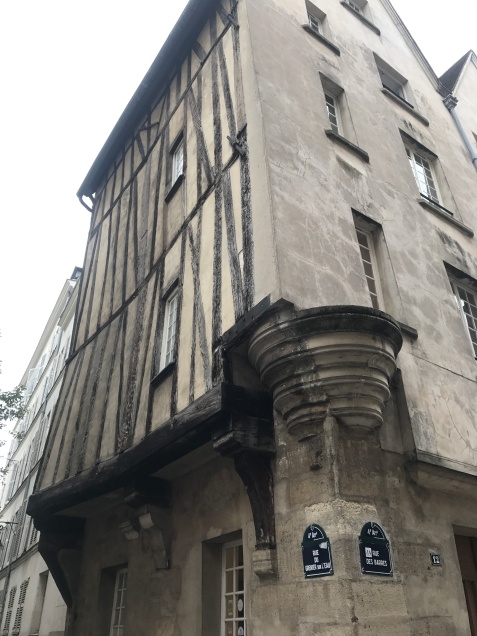 Napoleon III commissioned Baron Haussman to bring air and light to the center of Paris.  It basically was a vast public works program in the mid 1800s which included demolition of medieval neighborhoods that were overcrowded and unhealthy.  Paris had narrow streets, foul sewers and more than one cholera epidemic during this time.  While eventually Haussman got out of favor with Parisians (due to the money spent and continual construction), he made huge contributions to Paris as a whole with open public spaces, reduction of disease epidemics and improved traffic circulation.

She also introduced us to the ‘Wallace Fountains’.

There are at least 80 of these fountains still in existence and working, primarily March 15 to November 15, stopping due to the potential of freezing.  They are an integral part of Parisian landscape, most are green, as all urban development of that era were in order to blend in with the parks and tree-lined streets.  Sir Richard Wallace used his wealth for a variety of things, but he is most remembered by the fountains which bear his name.  It is a free source of water for all Parisians.

The region that this tour is focused on is called ‘Le Marais’.  In the 17th century it was the French nobility’s favorite place to build their mansions.  By the late 18th century, it was no longer the most fashionable district, but kept its reputation.  AFter the French Revolution, the district fell into despair and would stay that way.  In the 19th and 20th century is became a popular and active spot, hosting Paris’ main Jewish communities.  This area was targeted by the Nazis who were occupying France.  There is a monument that recognizes the families that helped many Jewish families escape.

While there’s no photo, right across from this monument is a school and 500+ children were taken during the Nazi reign.  There was a small sign recognizing their loss.

What takes a tour from ‘good’ to ‘great’?????  Food!  During the afternoon we had a chance to eat three very different type of pastries.  Each of these bakeries focus on generally one thing and they are considered some of the very best in Paris.  Our first stop was Aux Merveilleux and these pastries were extremely light.

They were like little puffs of goodness.  Eric selected the top one which had a cherry flavor, while mine was a coffee flavor.  They only made eight different flavors and truly, it was hard to choose.

Our second pastry was a macaron.  This place makes 18 flavors each day.  They have a standard 10 flavors (chocolate, vanilla, pistachio, etc) and the other 8 change from day to day.  I included the 8 flavors for today’s extra macarons. 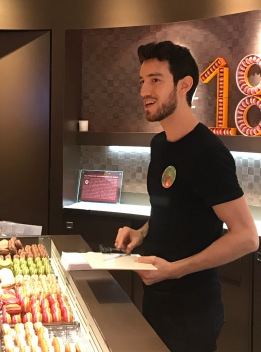 They made some very interesting (and tasty) flavor combinations.

I”ve got to let you in on my secret…………………….I have never liked macarons, until now.  Every one that I had ever tasted was like eating flavorless meringue, crumbling to pieces and just generally were not worth the calories.  OMG – I selected the chocolate and passion fruit macaron, and now I see what the big deal is about.  I will probably never eat another one, unless I go back to this place.  Eric got the pistachio & raspberry and he pretty much had the same comments as I did.

Our last pastry was a Kouign amann.  The official definition is “round crusty cake, originally made with bread dough, containing layers of butter and sugar folded in, generally from Brittany, France”.  This place had a lot of decadent things they made (oh, the caramel) but these were the star.  I had the apple caramel one and Eric got the almond flavor.  We found out they had two other locations in Paris and we were lucky enough to find one on our last day and made some kouign-amann purchases! 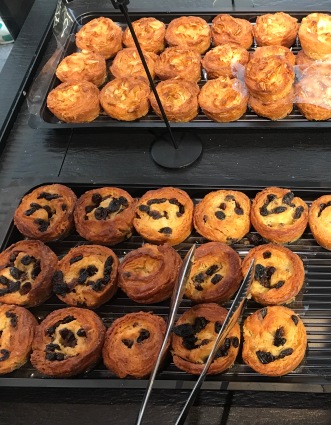 Our last stop was a wine bar.  The owner was very willing to share his knowledge (and wines of course) plus a cheese plate and a meat plate.  He personally visits the vineyards, which are typically small, family owned places and brings back wines that he enjoys. 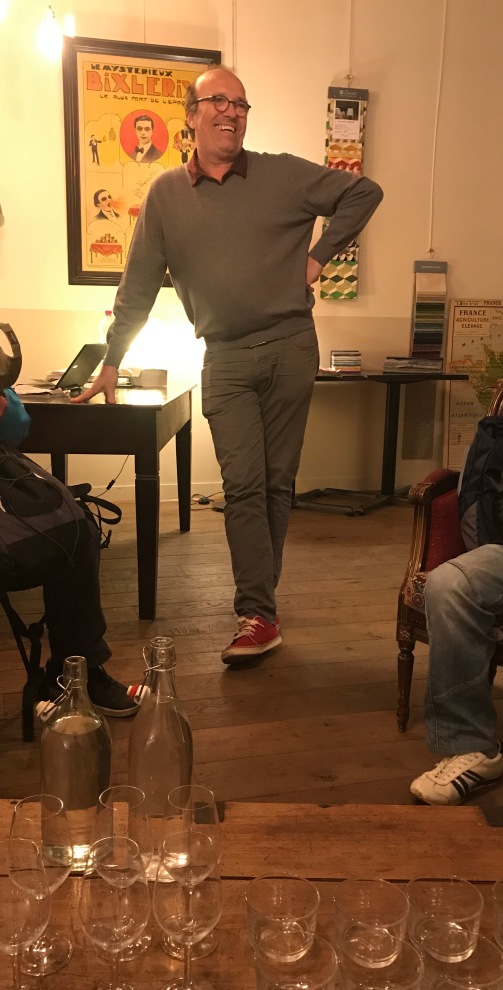 He had this really cool agriculture map that he used when sharing his knowledge with our group.

So, basically he had to kick us out of his store.  He had extended his hours for our tour group but our pack of seven (plus the tour guide) really bonded and didn’t want the night to end.  While the tour guide couldn’t join us, she guided us toward an excellent restaurant and the seven of us went together.  Alas, they couldn’t seat us at one table, so the group had to split up.

I started with a goat cheese salad while Eric ordered the ratatouille starter.

My meal was crawfish with avocado while Eric got the duck.

But, I’ve got to tell you. The best part of the meal was the company.  The seventh person (sitting with Alice & Bob) was in Paris for a wedding and originally from Sri Lanka.  After this he was working in Africa for a month, before going back to his home office in Japan.  The last couple (Sverrir & Diana) were from Iceland and this was their first trip away (together) since the birth of their fourth child.

Eric and I have been talking about Iceland for a while, well okay, maybe just me.  Eric has discovered that Icelandair flies from the US to Europe and staying over in Iceland is no extra charge.  Maybe I will finally get there.  🙂  Diana sent me a link already with things to do in Iceland.  I had done some research last year, but this link had some things I had never seen.

Not really sure if Eric and I are the best tour guides, but we do enjoy spending time in France and showing others our favorite places.  Eric has really picked up the French language using the Rosetta Stone learning program and it makes a difference.  You can almost see the difference in their faces when Eric makes a request or asks a question in French.  I’m just not very good at it.  Maybe by the time we are back for our next trip, I can manage more than a few words.