Lyon is home to many fabulous places to eat but these last two were beyond our expectations:  Daniel & Denise and ‘Aromatic’.

Daniel & Denise – described as a fancier bouchon that serves the kind of food of Lyonnaise cuisine that made the city famous.  It is one of Lyon’s most dependable and traditional eateries.  Come here for elaborate variations on traditional Lyonnaise themes. 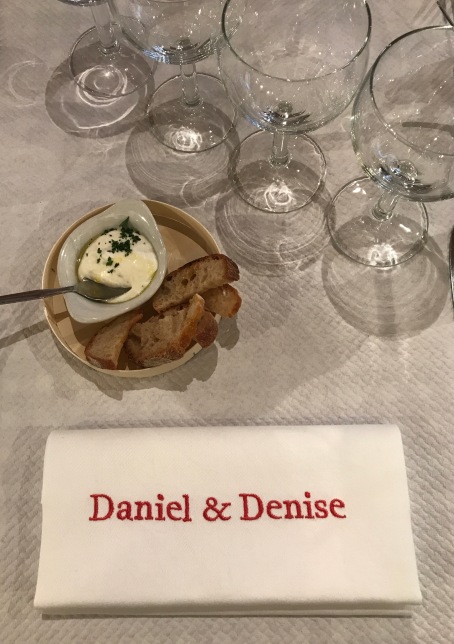 I pulled the above info from a variety of sources on the internet.  Let me be honest – I didn’t really want to go.  I thought it appeared over-priced and riding the coattails from its former reviews.  I was wrong.  I went in just tolerating the place and came out a big fan.

During some of our meals, Eric and I joke about who ‘won’ based upon our food selections.  I was the clear winner with the soup course.  I had cream of wild mushroom soup and it was hands down the best thing I had eaten in Lyon.  I’m not the biggest fan of all types of mushrooms, but the taste of this soup was behind any other comparison.  Eric ordered egg meurette (egg poached in wine sauce with bacon). My soup is at the bottom of the photo. 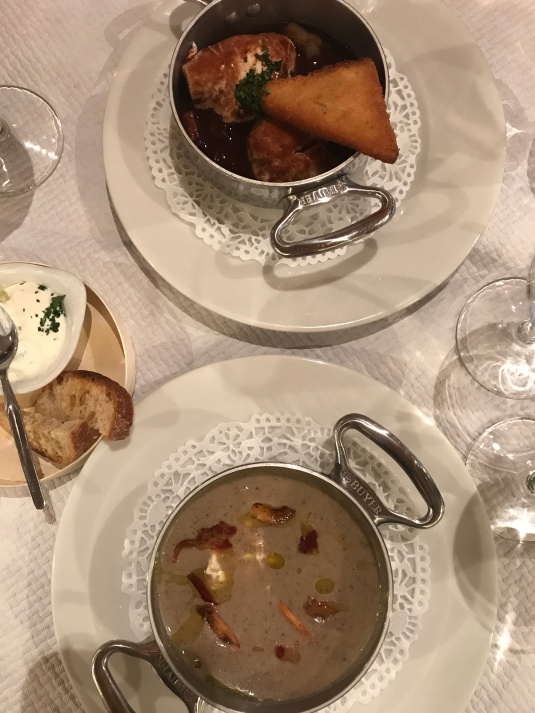 Our entrees came next.  Eric was able to order an item he had been wanting all week:   Tete de Veau or head of veal.  Most females  hearing this are going ‘ewwww’ and the others are going ‘hmmmm’.  Eric said it was everything he wanted and exceeded his expectations. 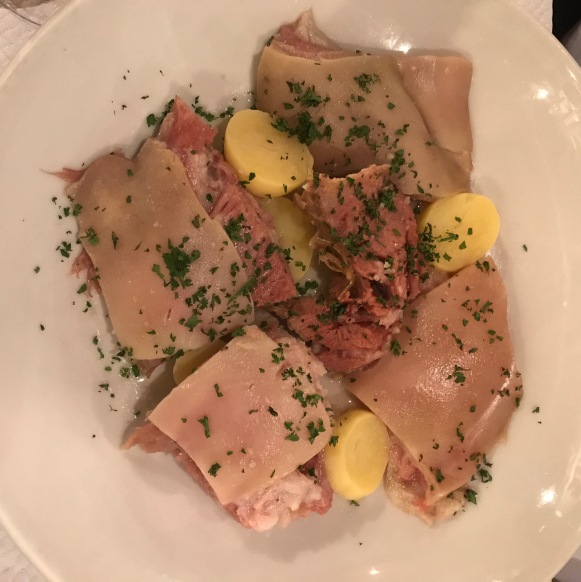 I got the poulet (chicken) supreme and it was very good.  Nothing after my soup was going to top that item. 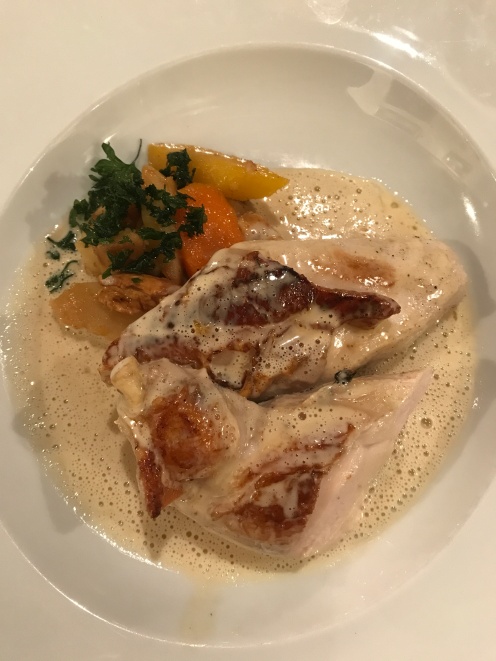 All meals come with the two side dishes shown below.  The mac and cheese was good, but the sliced potatoes – something else!  They don’t look like much, but OMG, they were tasty and we both kept going back for more – especially when dipped into the sauce from my dish. 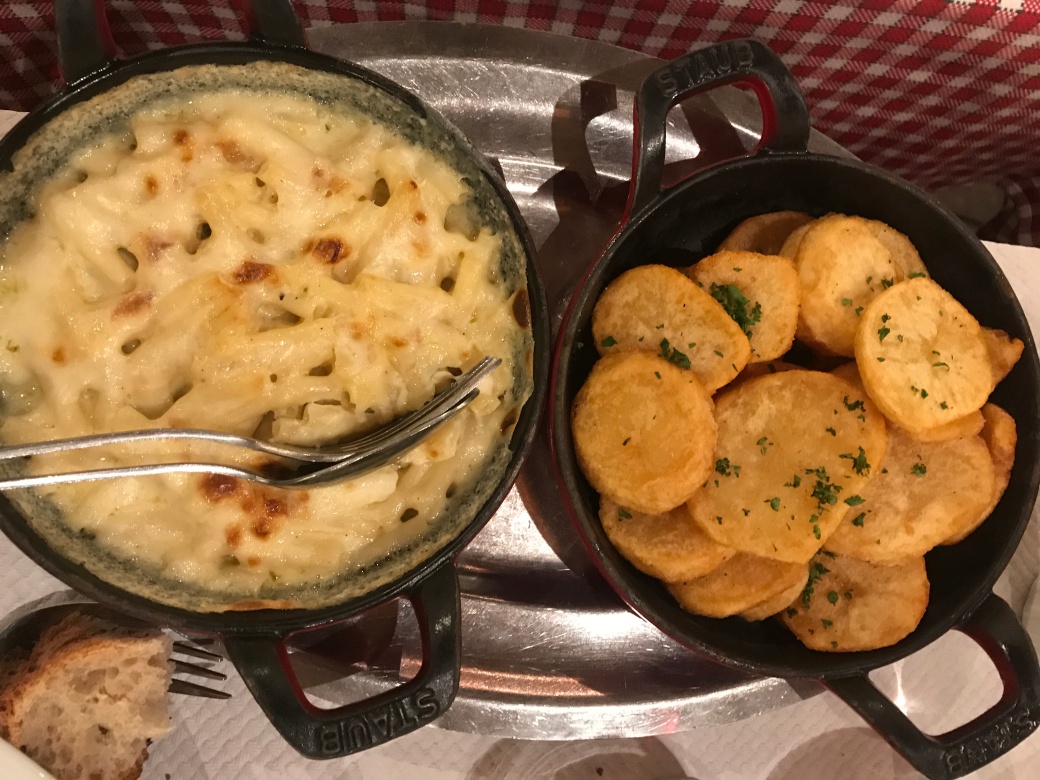 Dessert was good, it read better on the menu than the real thing.  It was black currant sorbet (cassis) but the flavors were too strong.  It was a cassis sorbet, with a cassis drizzle and topped with a jigger of alcohol.  Even eating the sorbet without the alcohol, the taste was very strong. 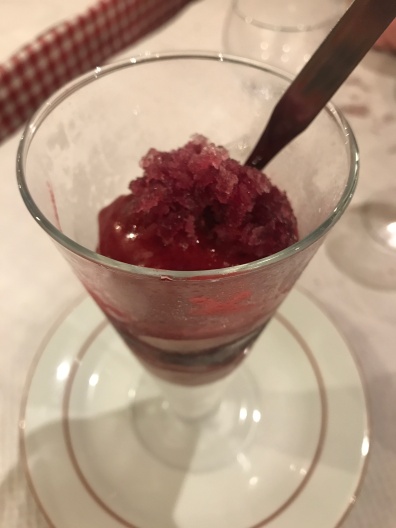 Overall the restaurant was another one in the ‘win’ column of Lyon restaurants.

Aromatic – described as “an up and comer”, creatively delicious, uses a seasonal menu with fresh and well-prepared items.  All reviews mention the warm, helpful and cheerful staff – and I would agree with all of the above.

This is a small restaurant run by two enthusiastic chefs in Lyon.  They are still making their way and a name for themselves and if they stay true to their values they will make it.  It is rated as the #1 Lyon restaurant on Trip Advisor.  Are there better places in Lyon, sure, but not for the price and the atmosphere this place provided.

Below is a preview of this month’s menu. 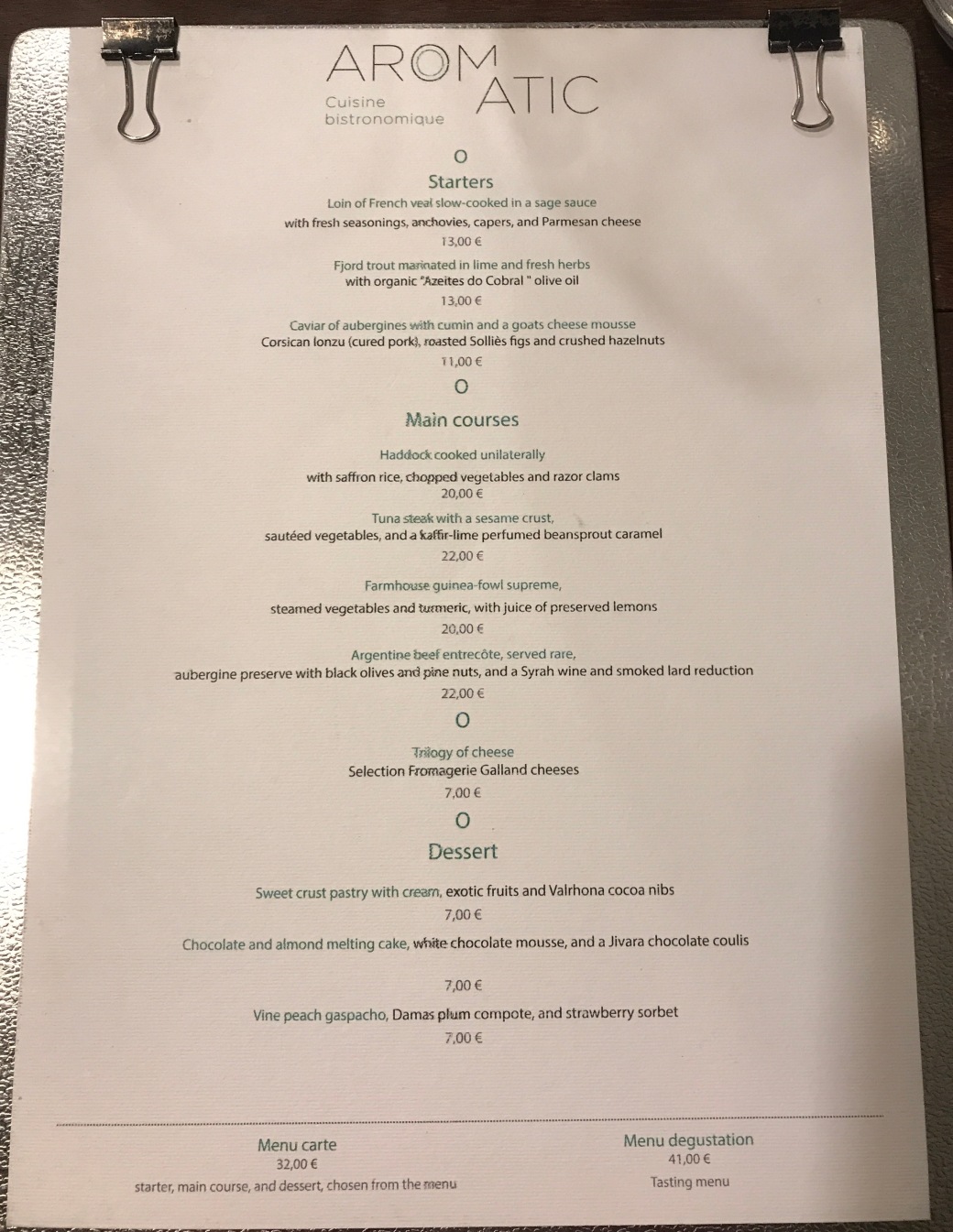 At the very bottom right corner is Menu degustation.  That was Eric’s preference and we both had to get the same thing.  I knew it would be too much food for me, but………..

This option gave us 2 starters (seafood & meat), 2 main courses (seafood & meat) and dessert.  But first the amuse bouche: jambon persille (ham with a parsley layer) – tiny but very tasty.  It was a square hunk of meat, but really good.  And when in France, wine is a must for all  of your meals as seen in our photos. 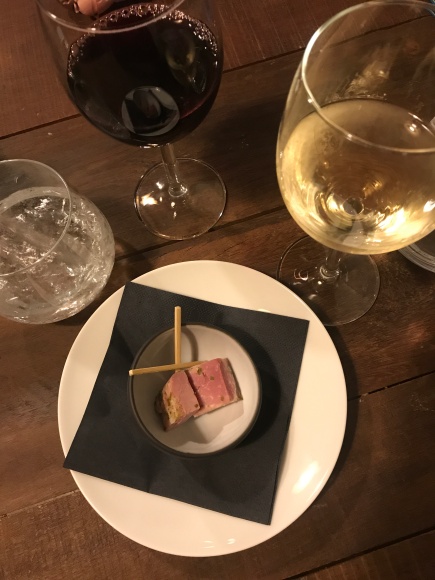 Our starters were fresh trout with herbs & olive oil, then the veal with seasonings, capers and sauces.  Both were artfully prepared and tasted superb. 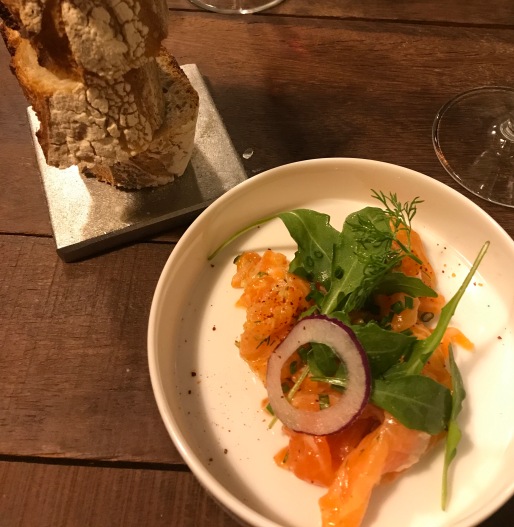 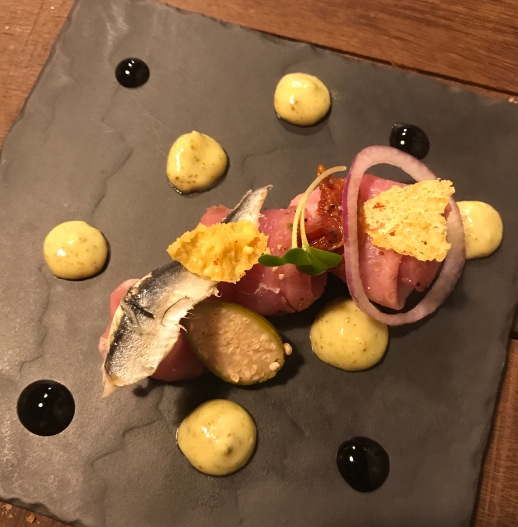 Quite frankly, I could have stopped at this point and been happy.  However, that was not to be.  We still had two more main courses and dessert.  All of the remainder of the food was well prepared and served, but I was just too full to truly enjoy them to their fullest.  We had haddock with saffron rice and then the guinea hen supreme with steamed veggies. 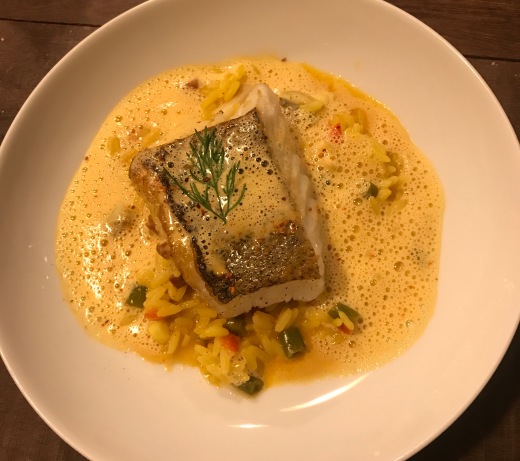 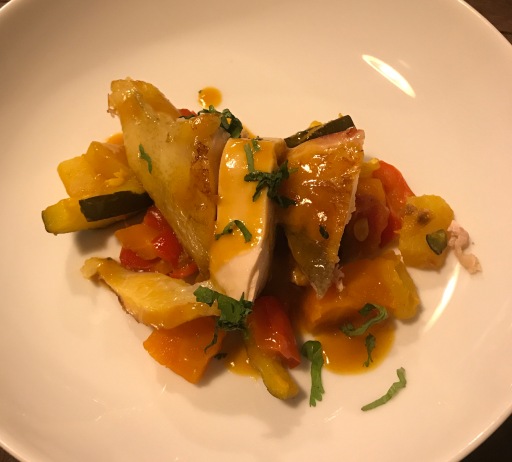 We finished with dessert: warm chocolate cake with whipped cream drizzled with caramel sauce and topped with nuts and chocolate shavings. 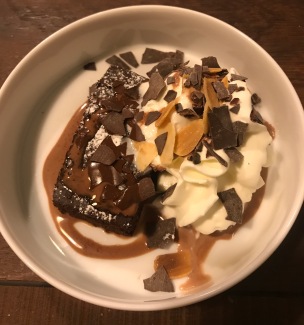 Believe it or not, Eric ate most of his dessert and he says ‘I’m not a dessert kind of guy”.  Again, I was just too full to enjoy the last several courses.  I left at least half of the dessert on the plate.  Our time at Aromatic was another ‘win’ in the culinary column.

We knew going to Lyon, food was going to be a major part of our vacation and the food we ate was truly a superb, French culinary experience.