Pretty much at the last minute, Eric suggested going over to Crystal River for a few days of fishing.  Friday morning he called for reservations at The Plantation beginning Sunday and checking out Monday.  He figured that Sunday night wouldn’t be a problem and he was right.  We always get a patio room so we can see the boat tied to the seawall.  This time was no exception. 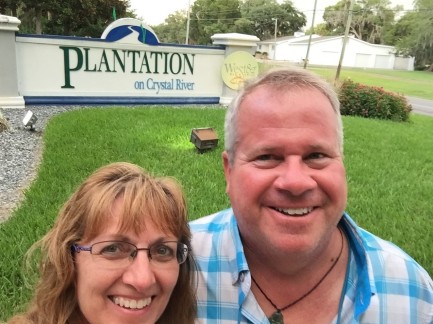 Their boat ramp is one of the skinniest that we have ever used.  I refuse to back the boat down the ramp.  On past visits, if there was a low tide when we launched or loaded the boat, we have been unable to use the ramp and I would drive the trailer to another ramp. 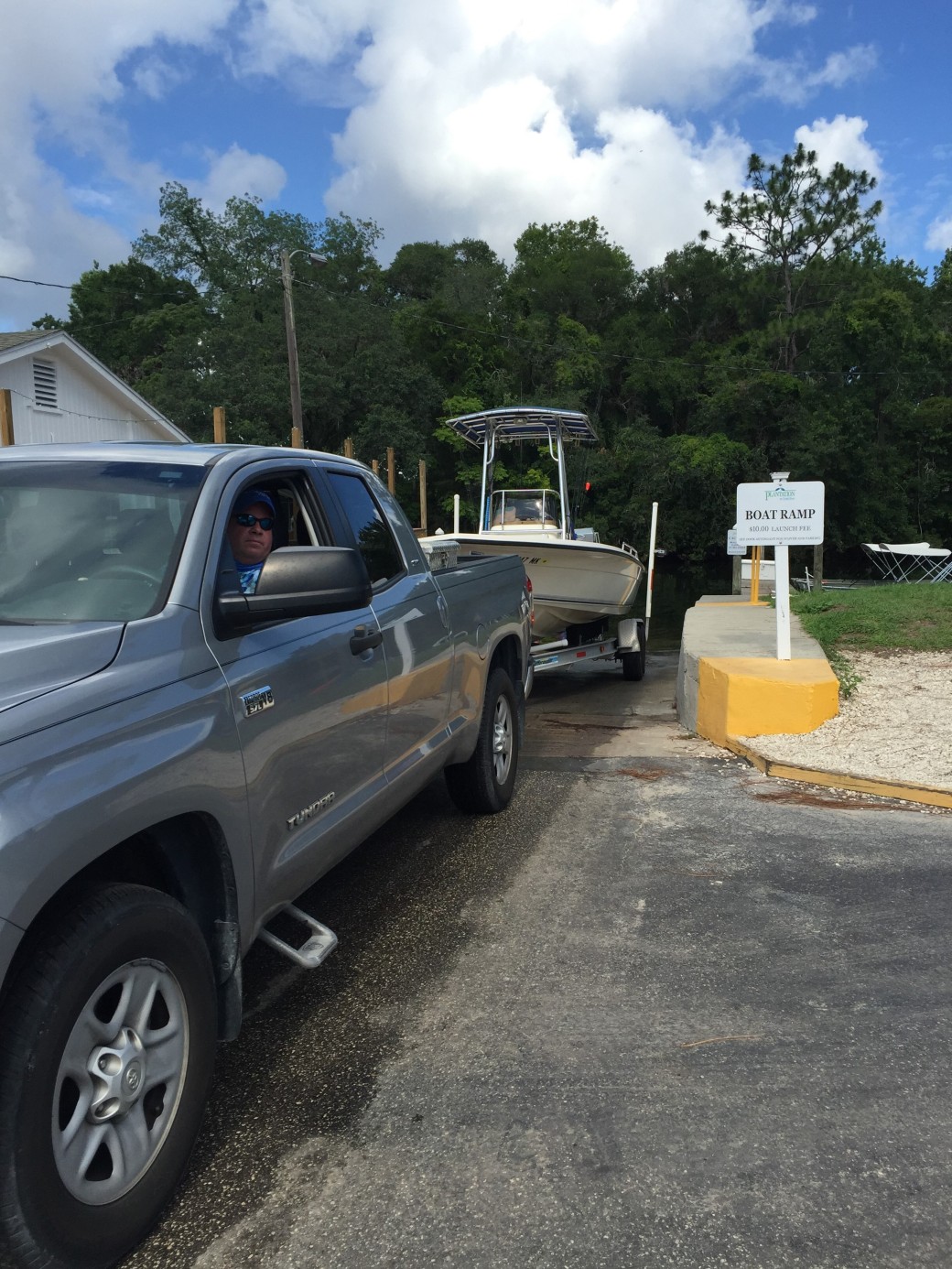 Even though the room wasn’t ready (at 10 am – go figure)  they allowed us to use their ramp and park the truck and trailer on their property.  We always hope that we can get a patio room along the tree-lined canal……….. 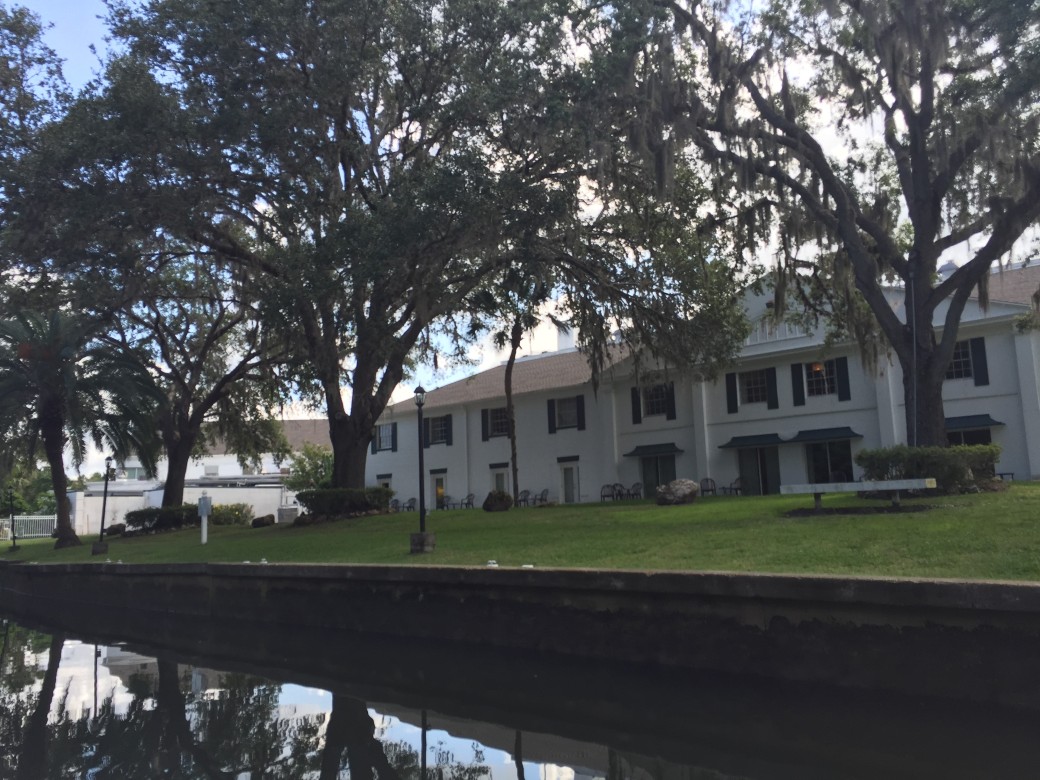 …………but it was not to be.  This is the oldest wing of the hotel and always our first choice.  They have definitely been adding some upgrades.  The new fish-cleaning area was amazing. 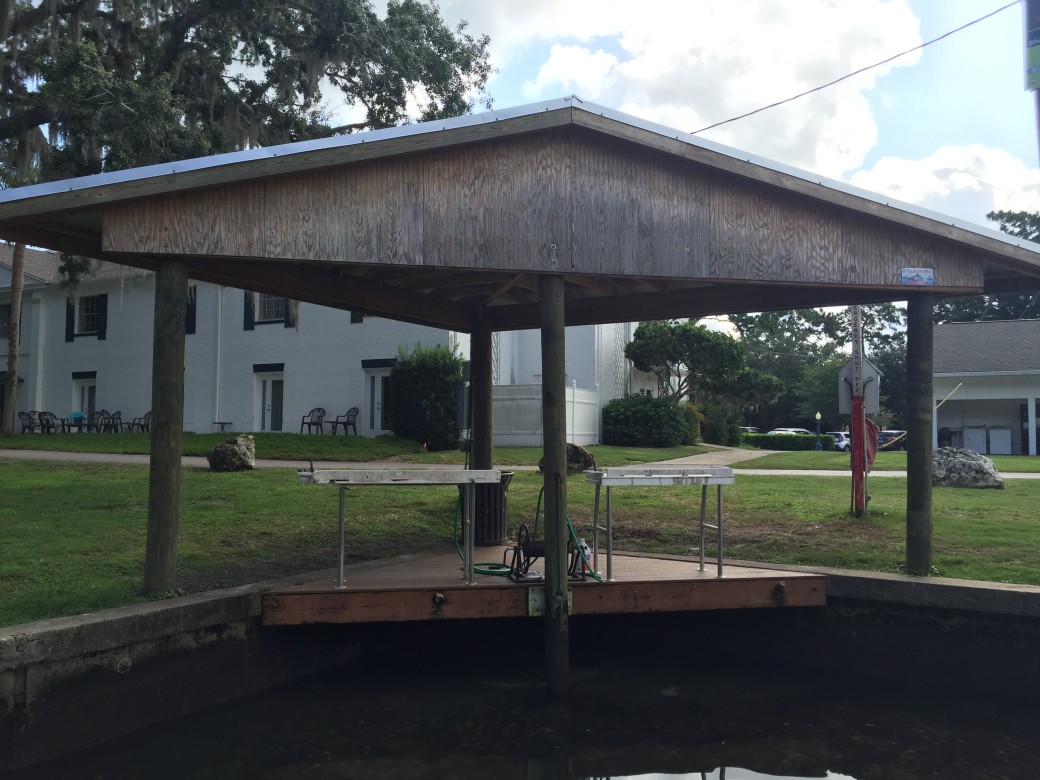 Since we’ve been frequent visitors over the last 5 years, Eric has gotten to know some of their employees.  They shared that a guy bought it several years ago as he was acquiring ’boutique’ hotels.  He put some money into the place and made some really good improvements.  This time one of Eric’s , acquaintances said it had been purchased by another person four months ago and more improvements are happening.   We would rather rent a home or apartment so that we could have a kitchen, but that hasn’t been possible for short-term rentals, thus we stay at The Plantation.

We had already put gas in the boat prior to arriving (80 gallons -yikes) and needed some live bait (shrimp). He did comment that we are paying less for marine gas now than we paid for regular gas when we bought the boat (still yikes!).    We refer to this as Crystal River, but the headwaters are called King’s Bay.  I had to do a little internet research to get more background.  It is the second largest springs group in Florida,with more than 70 springs scattered within the 600-acre bay.  Lots and lots and lots of manatees overwinter here and they have created local business opportunities around that fact. 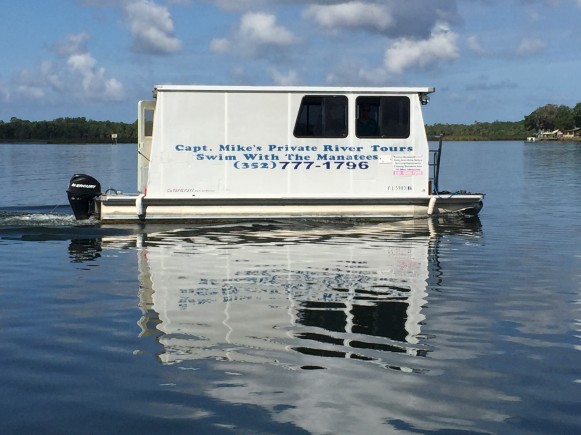 These springs are the headwaters of Crystal River, which is a short, tidal river that flows seven miles from the headsprings to where it meets the Gulf of Mexico.  Yep, typed that sentence straight from the internet.

In addition to it being a manatee refuge and a wildlife refuge, some people use the bay for meeting friends.  During scallop season, there would be 20+ boats in this area.  Today it was fairly tame.  However, it was the first time we had ever seen a shade structure placed in the water. 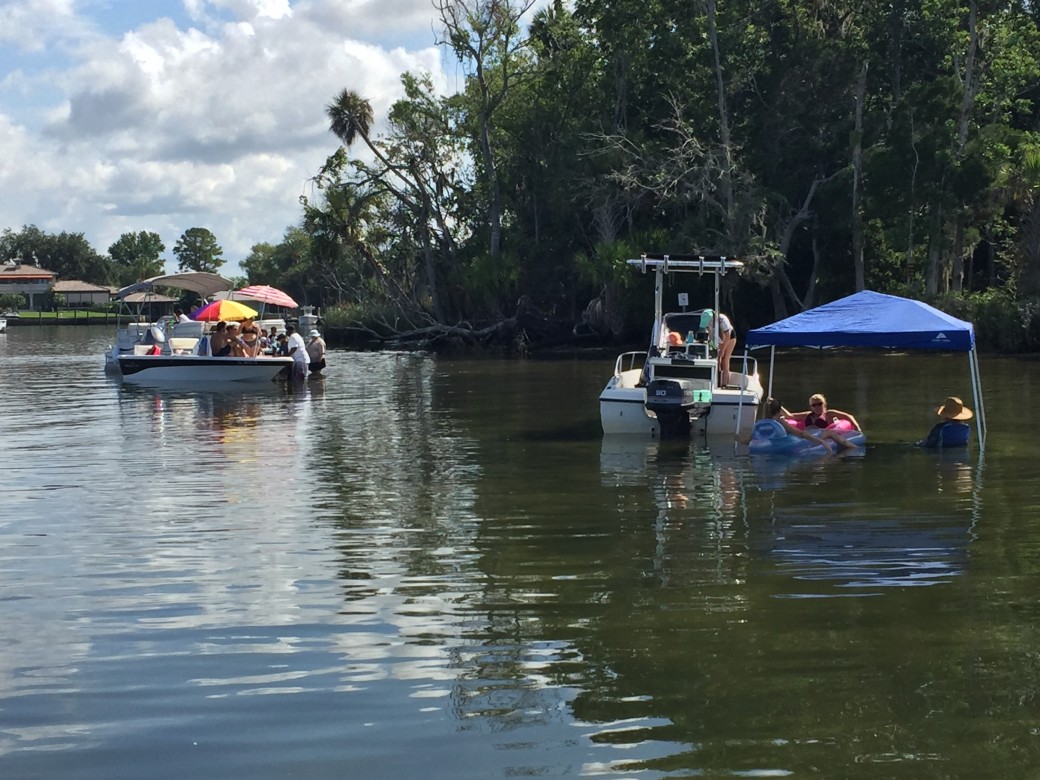 A little further away there are numerous sail boats and house boats anchored in the bay, once the water gets a little deeper.  We didn’t see anyone on the boat below, but it had  a fair amount of footage of living space – for a boat. 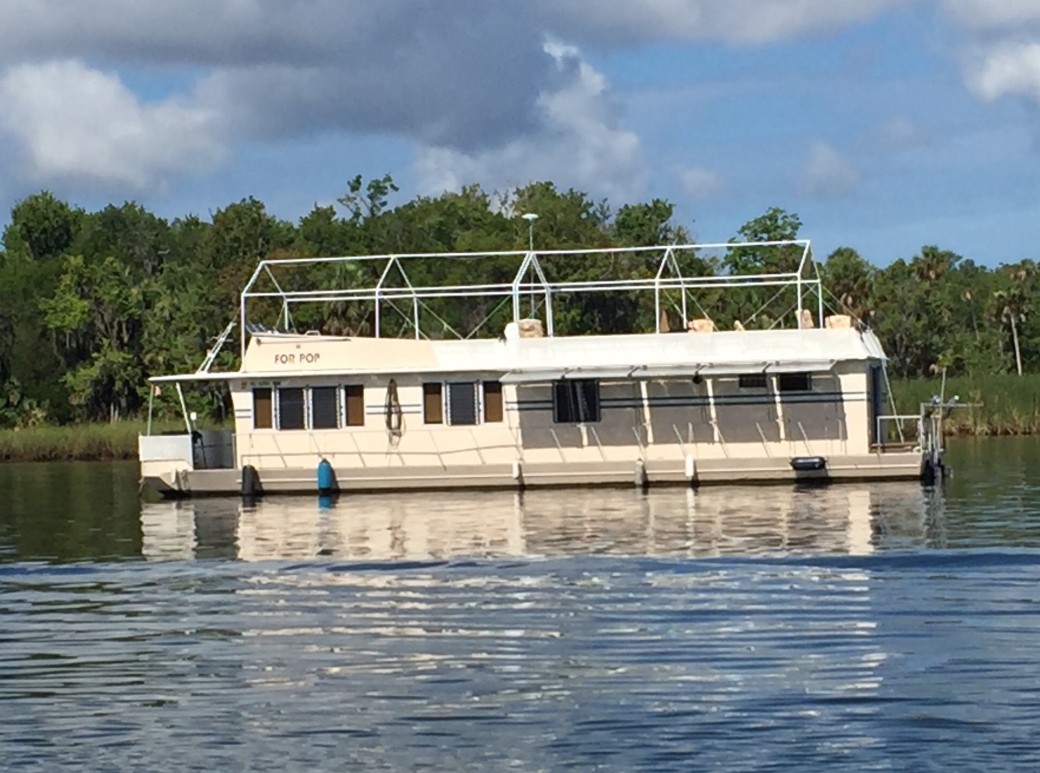 After getting our shrimp at Pete’s Pier, we headed down the seven miles to the gulf.  There are two (annoying) slow, minimal wake zones we go through before finally getting out of the river’s channel.  We always see lots of crab traps and occasionally dolphins that are going up the river.  But generally speaking, once you get away from King’s Bay, you pretty much see marshy land and palm trees. 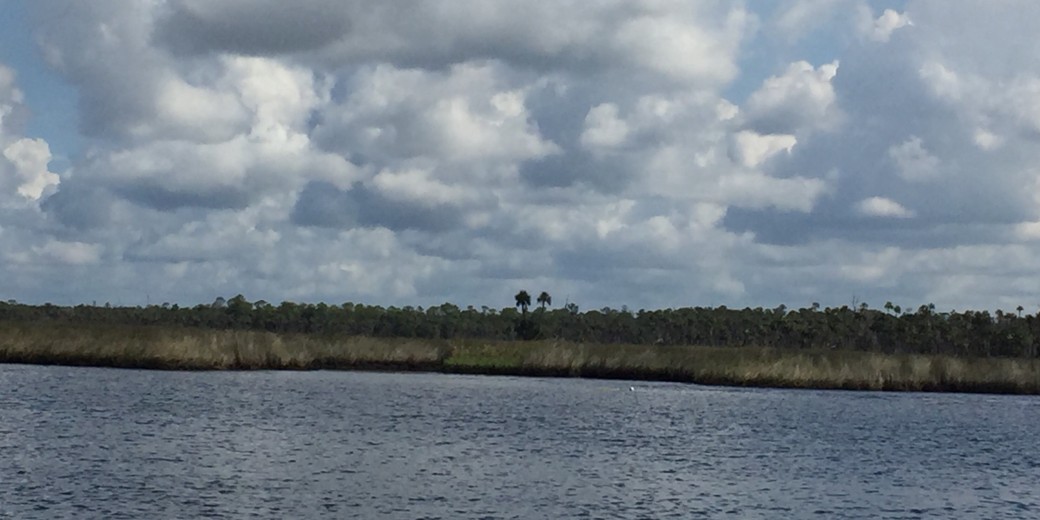 We headed to our ‘honey hole’ that Eric heard about a few years back.  Two guys were in the bar at The Plantation boasting about their catch and shared with Eric where they had actually been.  It has now become our honey hole whenever we are at Crystal River.  Today proved bountiful. 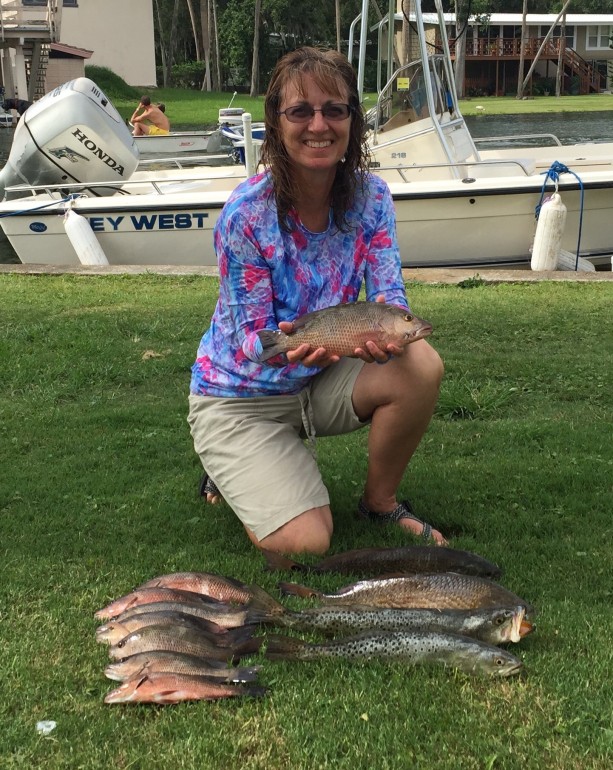 While both of us got keeper redfish, I had the touch and caught several more ‘short’ redfish which were thrown back.  Eric caught all of the seatrout today.  This time we were catching tons of Mangrove snapper.  We both equally caught the snapper, but I must say that one of mine was the biggest and that had to be held for the camera. 🙂  While we were still on the water, we got tired of catching snapper and headed a little deeper looking for trout.  We ran across a huge pod of dolphins.  It’s not uncommon to see pods of 4-6 dolphins, but obviously numerous pods had gotten together today and there were 50+ dolphins (our best guess) in the nearby water. 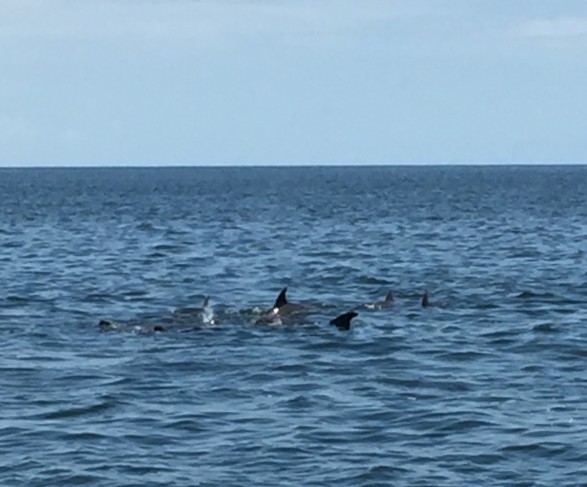 Just as we were packing to go back to the hotel, Eric saw a fish which has been his dream to catch……..a cobia.  They have to be at least 33″ to keep and this one was at least 48″.  Eric guessed it was a 60 lb fish.  The photo doesn’t do it justice. Kind of like the photos with the dolphins.  Just had to be there to get the full effect. 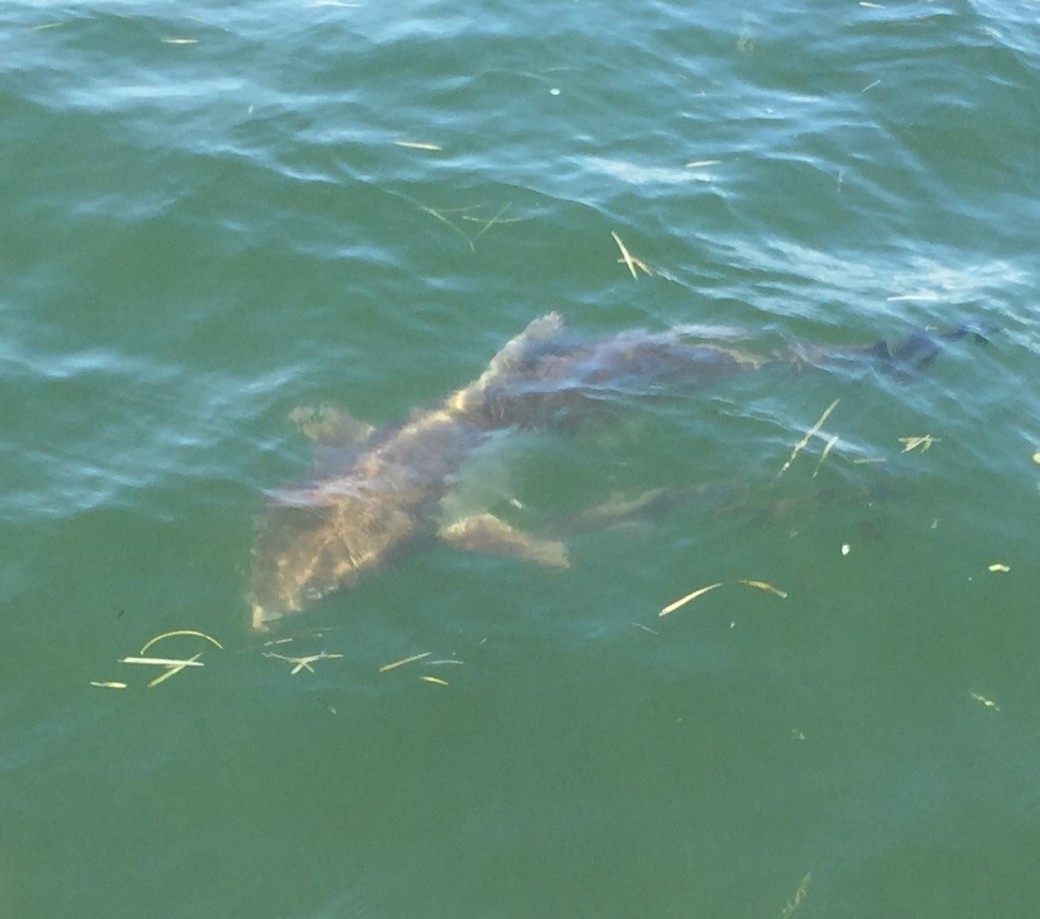 It was just casually swimming around and underneath our boat in 10′ of water.  He grabbed the closest rod, put a shrimp on it and dangled it right in front of its nose.  After the second try — BAM — the fish took the bait and the hook.  The fight began. 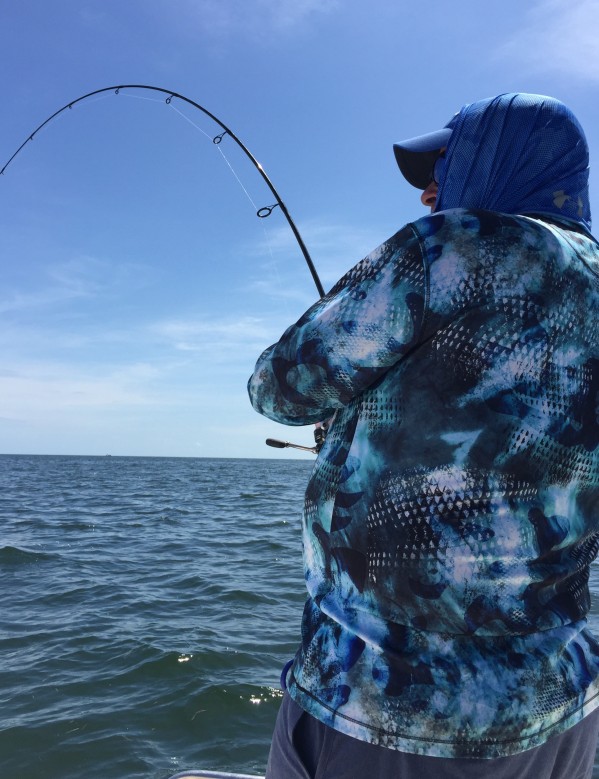 When he grabbed the closest rod, it wasn’t the best rod for the job.  It was one of our lightest and only had on 30lb line – not ideal.  The battle for the cobia involved both of us.  Eric would reel in the fish, the fish would get spooked by the boat and take off.  I ran the boat after him otherwise all the line on the reel would be gone.  It took us a little while to get our (his) spoken directions in sync, but after 45 minutes we were a solid team.  He didn’t even need to give me directions – lots of practice in 45 minutes.   Of course, the outcome was already guessed.  We didn’t have a gaff to pull the fish into the boat.  We only had a net and the fish was oversized for our net.  After Eric wore the fish out enough to pull him along-side the boat, I got the head in the net.  Eric tried to reach for the tail but it was too slippery.  The fish threw the hook and swam away as fast as his fins would allow.  Eric was stunned.  This would have been his ‘fish of a life-time’,an epic event (his words not mine).

We headed back to the hotel, got our room and Eric went to clean the fish. He came back 30 minutes later saying that another hotel guest (young kid) helped him after Eric cut his finger (badly).   He has first aid supplies in the truck but had his hands full with the fish.  The young kid helped him disinfect the cut and put some water-proof bandages on his finger.  He said later that the last few fish were some of his worst filleting ever.  He just wanted to get it done and get cleaned up.

We could eat at the hotel (and have done that numerous times) but we checked the internet for highly-rated restaurants in the vicinity.  Trouble was most were closed on Sunday or the highest ranked one closed at 6pm and it was 5:47 pm.  We weren’t going to make it.  I found an interesting one in Dunnellon, 6.8 miles away – Blue Gator Restaurant & Bar on the Withlacoochee River. 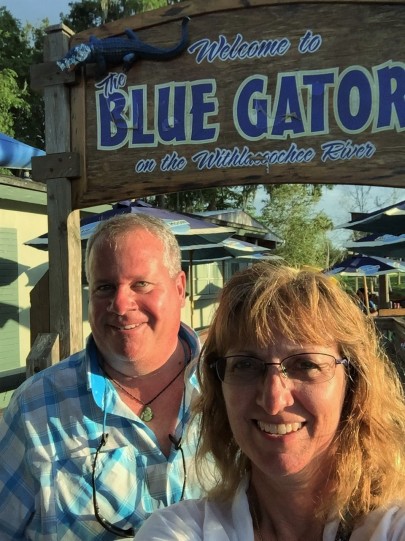 It had pretty typical fare for a water-front restaurant.  We sat at the outside bar and both ordered fried seafood (is there any other way to eat fish?).  I ordered the fried shrimp and fried grouper fingers (on the left) while Eric ordered the seafood combo with fried shrimp, grouper and frog legs.  It definitely is a place to enjoy outside seating with the right weather.  The weather was comfortable in June, they utilized numerous large fans around the tables & seating and there was no rain in sight. 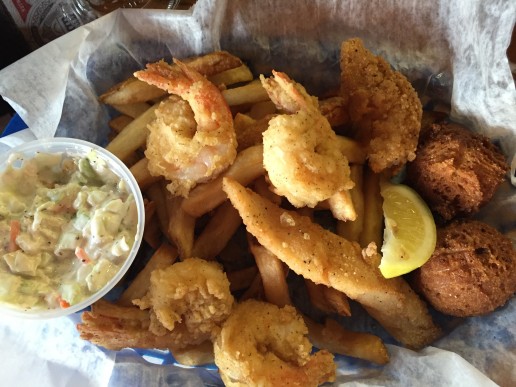 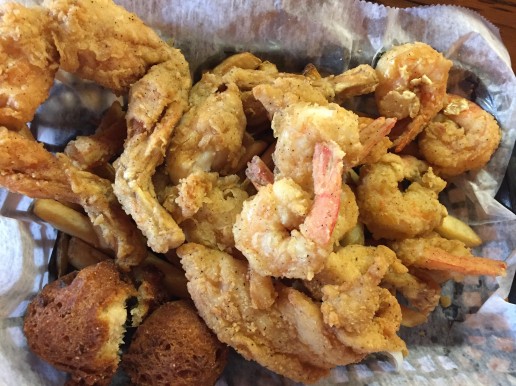 We finished the night with a few drinks at The Plantation bar.  The sangria is their special concoction having blackberry liquor and pineapple juice before topping it off with red wine. 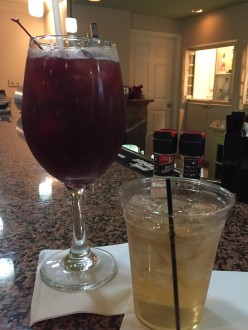 Monday’s fishing is another story to tell.