Driving the streets of Crystal River, we found this really ‘cool-looking’ place that had nightly rentals.  After a quick photo and subsequent internet research, we were definitely intrigued. 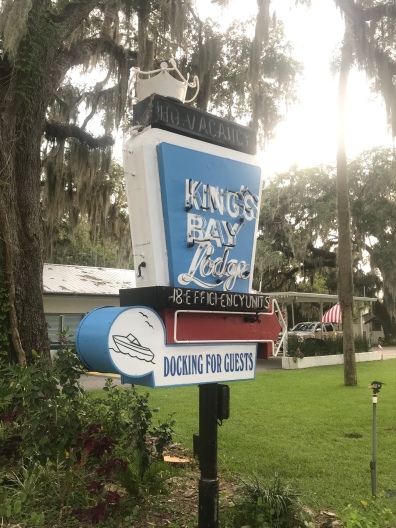 A little internet research around Kings Bay Lodge came up with this:

…………….along with the inside of our unit.  All of the units are different since they are owned by different families. 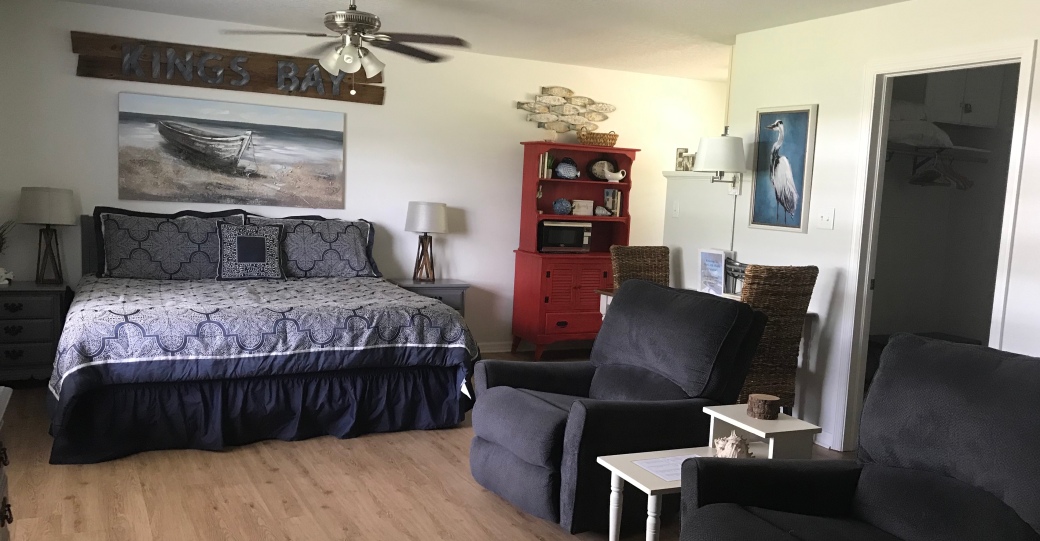 The pool is kind of interesting…………..

As you can read on the sign, this is a natural spring fed-pool, converted into a swimming pool – which couldn’t be done in today’s world.  There’s this square ‘outlet’, seen from the water-side to release the water flow.

Eric was brave enough to take a dip – not me.  The water is a constant temp (70 degrees F) which sounds okay, but in the summer with the surrounding heat, it feels frigid.  In the winter, 70 degrees feels rather ‘balmy’.

Turning around after my shot of Eric, this banana plant added some tropical charm to the surrounding pool area.

Before checking in, we fished in the Gulf and caught our supper.  Top fish is a spotted seatrout.  The fish below it (L-R) are 2 porgies and a grunt. 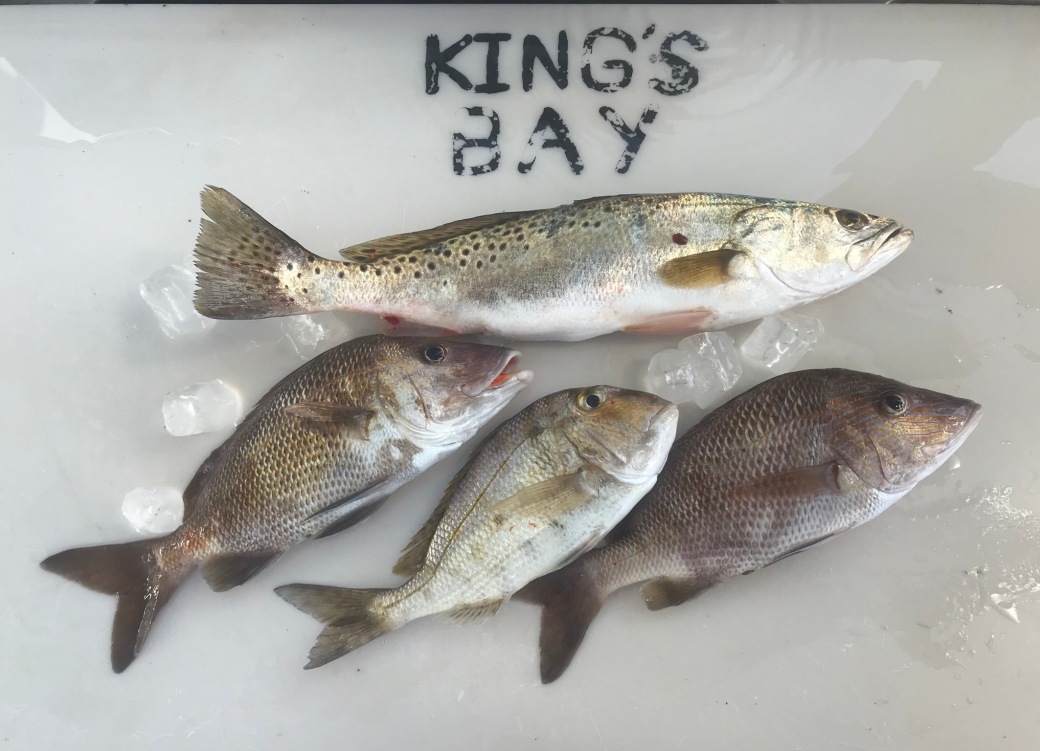 Other fish were caught during the day, like this Jack crevalle.  They are sooooo much fun when they get on your hook – pulling out line from the reel (its a distinctive sound) and not giving up without a fight.  But then when you get it close enough to the boat to see what you hooked………….crud, not an edible fish.

Some fishermen practice ‘catch & release’, while others do not – like us.  If we catch an edible fish, -within FWC guidelines – we keep our limit.  And then it turns into dinner, like below.  Swimming in the Gulf late afternoon, on our plate early evening – along with cubic fries and smothered green beans.  Now that’s fresh fish!

We filled in the cracks with ice cream – my flavor of choice this time was oatmeal-cookie vanilla ice cream. 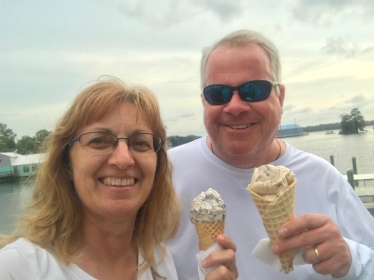 Since our accommodations are in the historic part of Crystal River, places such as the ice cream shop are easily within walking distance.  They’ve created this fun walkway to take advantage of water views.

We followed the River Walk and found an interesting photo spot right as the sun was setting.

Right behind our lodging is a crab operation – retail, wholesale and a restaurant.  Their crab traps are stored in an empty lot, waiting until the season opens.

Although we had to check out on Monday morning, we still got in some fishing time.  First stop in the morning was to Pete’s Pier to get live shrimp.

Interesting side note………….you cannot put the shrimp in your boat’s livewell just yet.  Crystal River is composed of 70+ springs – fresh water – and the shrimp need salt water.  Put them in now, and they will be dead by the time you get out in the Gulf.  Nope – believe it or not, we have not done that, thank goodness!

Here’s a number you hope you never have to call.

In an earlier post I shared a photo of this man and his dog.  They apparently have a routine and go for a ride most days.  Good for them.  🙂

We had a good morning of fishing.  I caught one of the Jack crevalles – which was fun.

I also got this guy – a mangrove snapper.

But my best catch that day was this awesome Redfish.

Yep, he’s big – too big: 29″.  😦  FWC regulations state redfish must be at least 18″ in length and no more than 27″.  Slot regulations are important to keep the redfish population from being destroyed – which has happened in Florida in the recent past.  Fish that are bigger than 27′ are breeding size.  This redfish was thrown back into the water to make more redfish.

Eric caught this pompano and he was delighted!  He thinks it is the best fish ever – that’s his opinion, not mine. 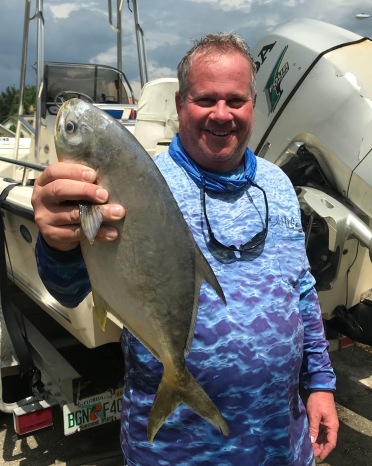 Overall, we brought home a nice variety of seafood.  Eric makes fun of my cut herbs added to the board.  Top to bottom:  pompano, mangrove snapper and black drum.

The pompano fish was baked in parchment, along with some veggies – very tasty.  Hard to see but there’s a filet of fish underneath the carrots and asparagus.

As you noticed in the title, this post is ‘Take 1’.  There’s already been a ‘Take 2’ and that will be my next post.  Stay tuned!  We really, really, really like these accommodations.