We finally made it to Iceland’s iconic church – Hallgrimskirkja Church.

→Our first day in Reykjavik we walked past it………

→No matter where you walk, you can see it………

But we had yet to explore it ourselves.  Today was the day.

Designed in 1937 by an Icelandic architect, construction began in 1945 and was not completed until 1986.  Being located on the highest point in central Reykjavik adds to the commanding city-wide appearance of the 244 ft high tower.  It is the largest church in Iceland and among the tallest buildings in the country. The church is named after a 17th century Icelandic poet & clergyman.  That’s your history lesson for today!

From the photo above, a statue  is seen on the left – Lief Eiriksson.  He’s considered the first European to set foot on the North American continent around 1000 A.D.  probably in Newfoundland. This statue was given to Iceland by the United States in 1930 to commemorate the 1000 year anniversary of their parliament – Althing.  I talked about Althing in an earlier post for Iceland – google it or go back and read it.  🙂

These doors greet you in the front of the church, but you enter from the side. 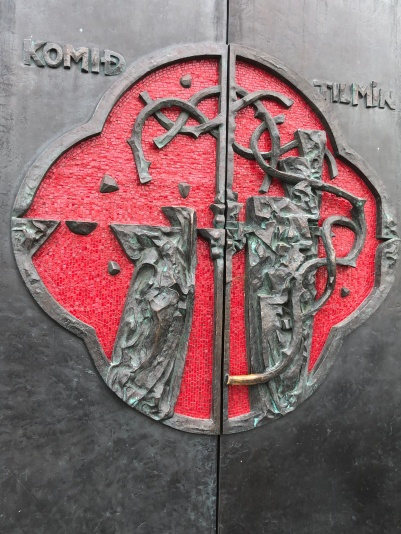 Entering the sanctuary through a pair of these doors……….

You are greeted by this.  Its stark interior is a departure from churches seen in Europe, but is no less inspiring.  On the day we visited, we initially were the only ones in the church and my first words were………..wow.  I sat in one of the pews and just absorbed the power of the moment. 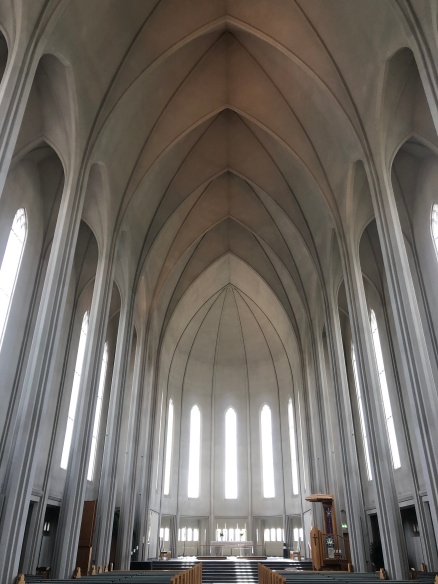 Okay, now turn 180 degrees around and you see their organ. 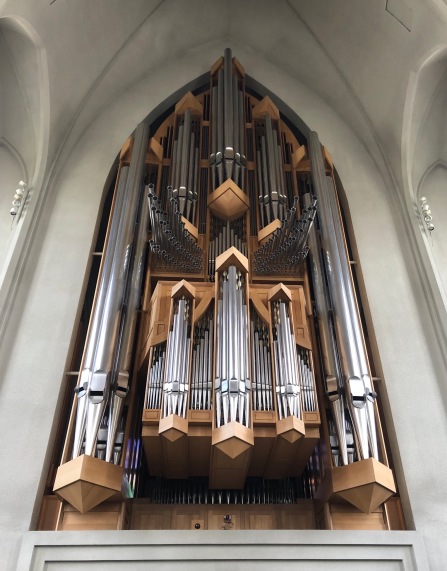 My only disappointment…………….the tower is usually open and for a modest fee can be ascended for an amazing 360 view of the city and surrounding mountains.  The elevator is being renovated and the tower was not open.  That was a bummer.  The one upside is that we will have to come back!   (Shhhh, I’m already thinking of a month that I can return, we’ll see what transpires – fingers crossed).

Across the street from the church we were able to pop into a sculpture garden and found some interesting statues and  unique photo ops of the church.

We had several memorable meals at the end of the week. We re-visited a restaurant from our food tour on Day 1 and were joined by a lovely couple we met on our day-long Golden Circle tour, hailing from Belgium.  Eric had lamb soup followed by lamb shank (seen below). I ordered a lamb flatbread.  Shocking for me I know.  Writing this, I can’t believe that was my meal.  Let me tell you, there was nothing left on my plate.

My flatbread appetizer allowed room for dessert and I had a delicious one: chocolate cake, topped with vanilla ice cream, covered with a raspberry sauce and macadamia nuts – yum!  Eric doesn’t usually eat sweets but he was sneaking  bites when he thought I wasn’t looking. 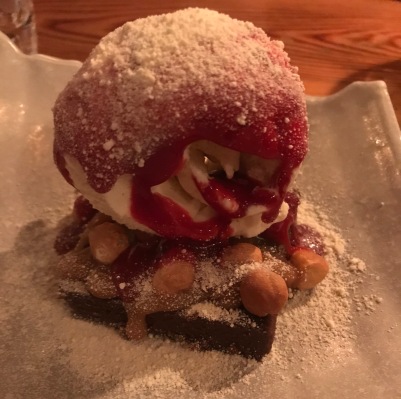 We truly enjoyed our meal with this couple from Belgium and hope to meet again in the future.  After spending a few days in Iceland they were heading for a week  in Boston, then NYC before heading home.

Although I knew going in that our meals would be dominated by lamb and seafood, I was hankering for a pizza by the end of the week.  Eric took some convincing but I knew he was won over when he googled top pizza restaurants in Reykjavik and found Hornid Restaurant Pizzeria. 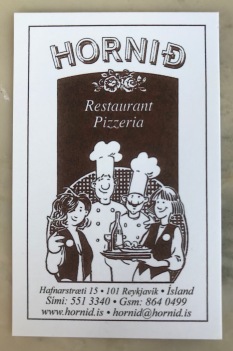 We shared one of their specialty pizzas and topped it off with an Icelandic beer – Gull.  While not a craft beer, it went down smoothly.

We had an excellent waiter and turned out his father was one of the original owners.  It was established in 1979 and the first Italian-style restaurant in Iceland.  They’re reowned for fresh ingredients, delicious pizzas and friendly service.  He graciously allowed me a photo and you can see the pizza ovens in the background.

We went out a few times for breakfast instead of eating at the apartment.  I enjoyed both outings, but they were different.  The first was at Café Loki, another stop on our food tour on Day 1.  I got the bagel sandwich while Eric ordered this seafood offering:  pickled herring with eggs & onion and flaked cod combined with soft scrambled eggs.  Not my idea for breakfast, but he enjoyed it.

He was most interested in the sheep’s head jelly and the waiter brought him out a taste. Google it.  It sounds gross to me (and also to the waiter) but Eric enjoyed it. 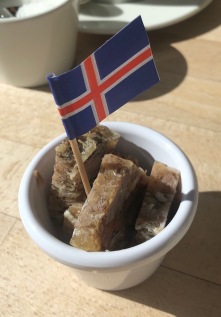 The morning of departure, we ate at Sandholt Bakery.  OMG!  If I knew how good their breakfast was, we would have been eating there every morning.  My choice was a French toast with a berry compote and orange marscapone.  Eric had a ham croissant and more of the Icelandic skyrr, topped with blueberries.  My cappuccino is so cute – just saying. 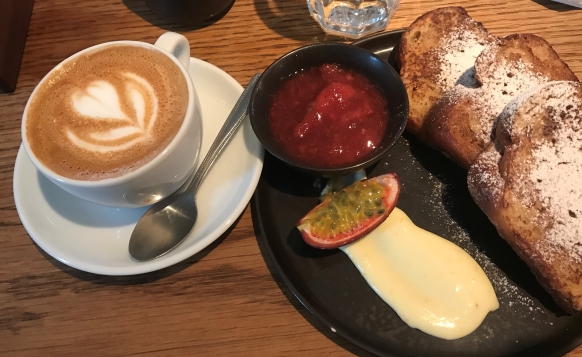 Throughout the week we had picked up some breads and pretzels from this bakery and their display was always enticing.  I wanted one of everything! 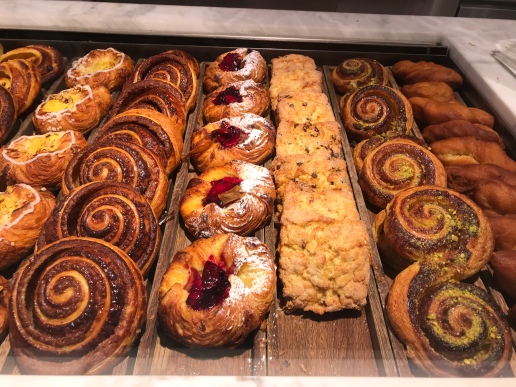 It was an amazing final taste for our last morning in Reykjavik.  We got one last photo as we walked back to our apartment to gather our luggage and walk to our bus stop for pick-up.

You might think this is the final posting for our trip in Iceland – not!  Throughout the week I’ve been getting unique and interesting (at least to me ) shots from around town and this will be coming soon.