Twenty-five years ago, Eric and I were walking down the aisle to become Mr & Mrs.  A lot has happened since then, some good times and some better times.  Times when we were separated half a world apart and other times exploring unknown parts of the world together.  Most every year we do something to celebrate whether it’s going out for a special meal or this year, checking something off the bucket list.

It’s always fun to look at old photos (who has photo prints any more!) and fondly remember those times. This year is a bit more special as we hit our 25th anniversary.

The photos below were part of our wedding video (no one does those either) and was a fun thing to put in this posting. 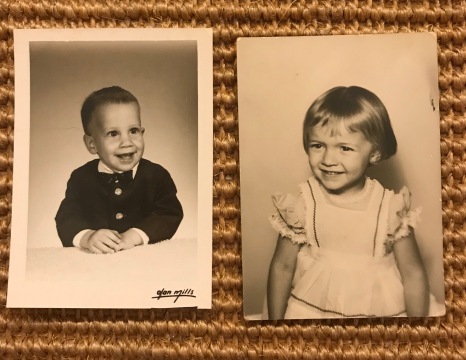 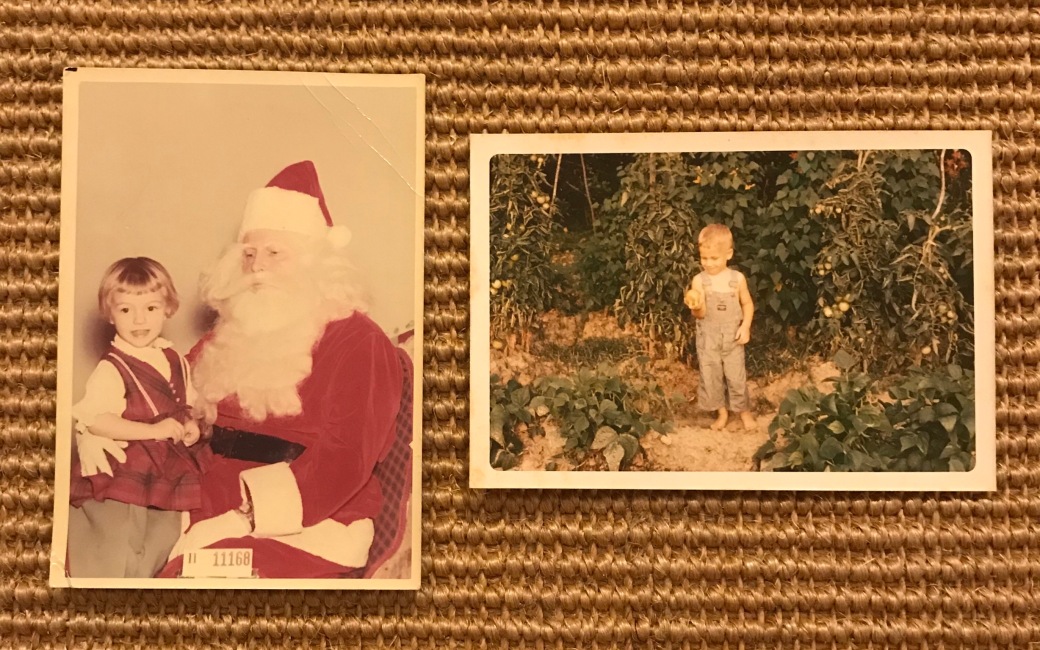 I also put together a memory book and included a few of those pages with this posting. 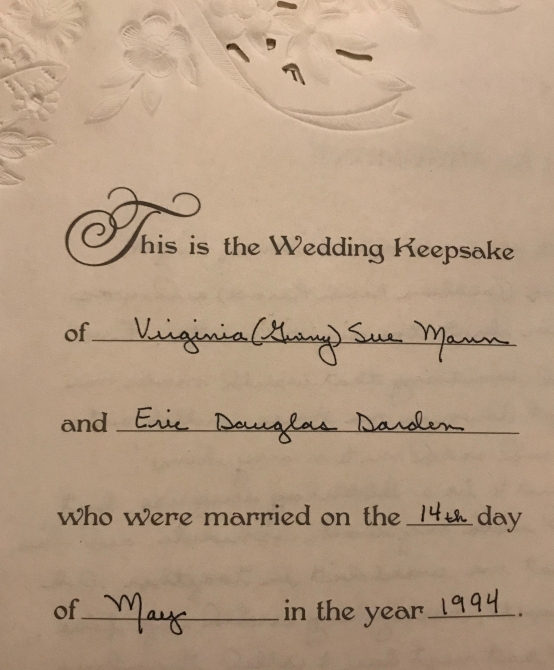 Along with with our wedding party 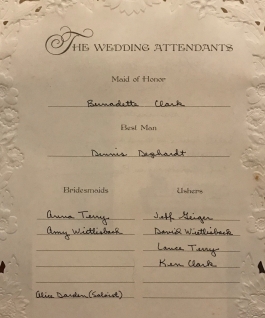 I still have my wedding dress and through the years it has fared well.  Some of the ecru lace & beading are growing darker with time, but for the most part, it’s in good shape.  Why am I keeping it?  Sentimental value, I guess.  But I am giving some thought to ‘upcycling’ pieces of the dress.  It’s the first snip of the scissors that is the hardest.

My veil is packed in the same box and holding up well.

No, there’s not any live shots this year with them on, but I have put them on several years ago and they still fit  🙂  probably better than the day I first wore them !

We had invitations printed-almost waiting too late-and friends stopped over to furiously get all the pieces stuffed into the envelopes and addressed to mail out. 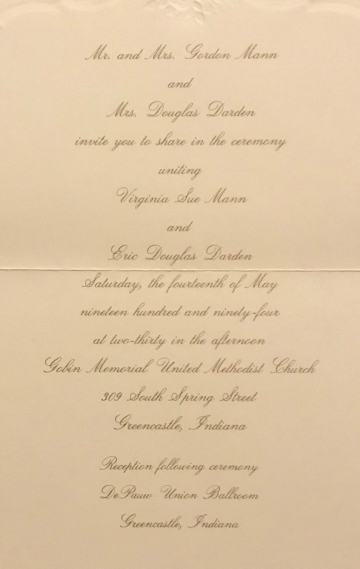 It was way better than any photo I could take with my camera.

Now, lets get to the good stuff-wedding photos.

Upper left corner, clock-wise:       A shot with my sister before the wedding, me with our groomsmen and Eric with the ladies. 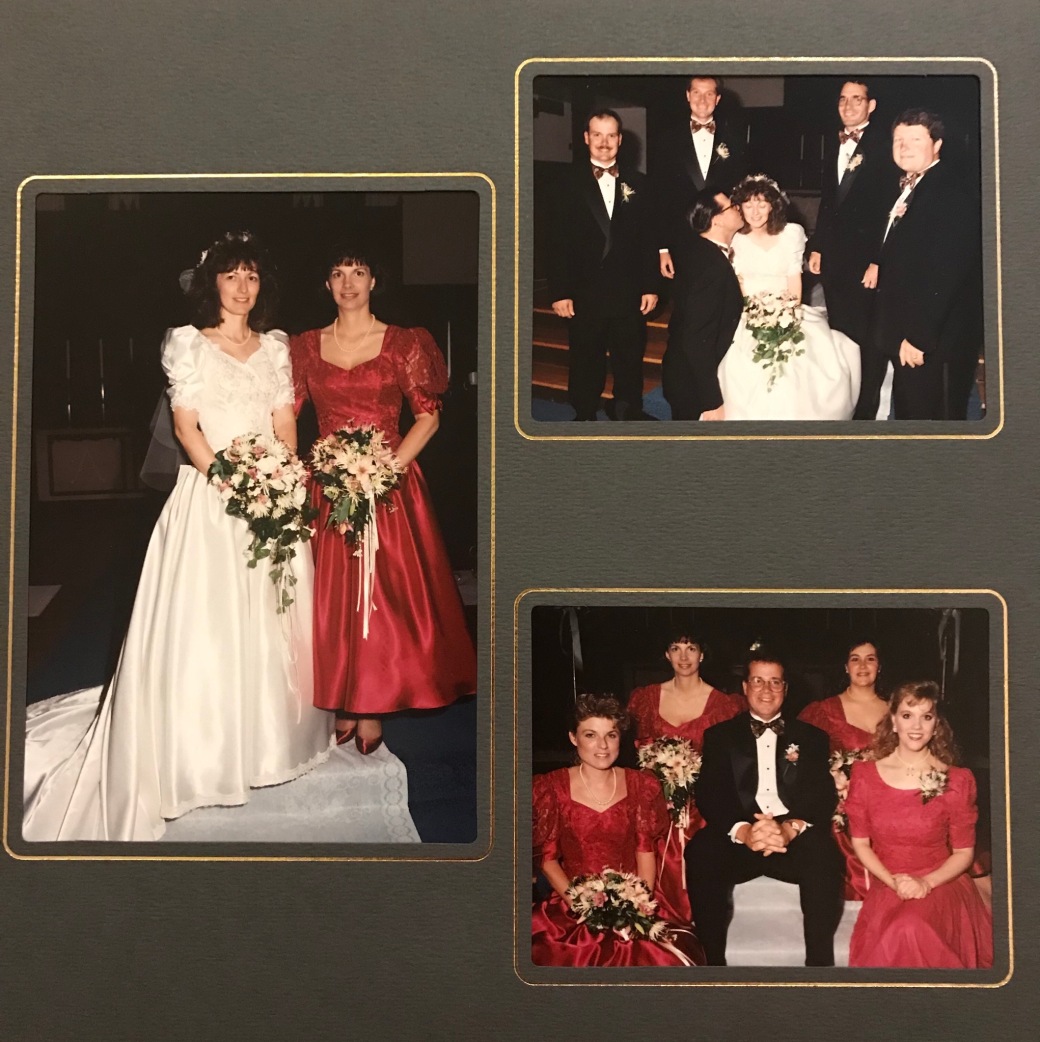 Upper left corner, clock-wise :      I’m with my parents, a solo photo before everything started and Eric with his mother and sister. 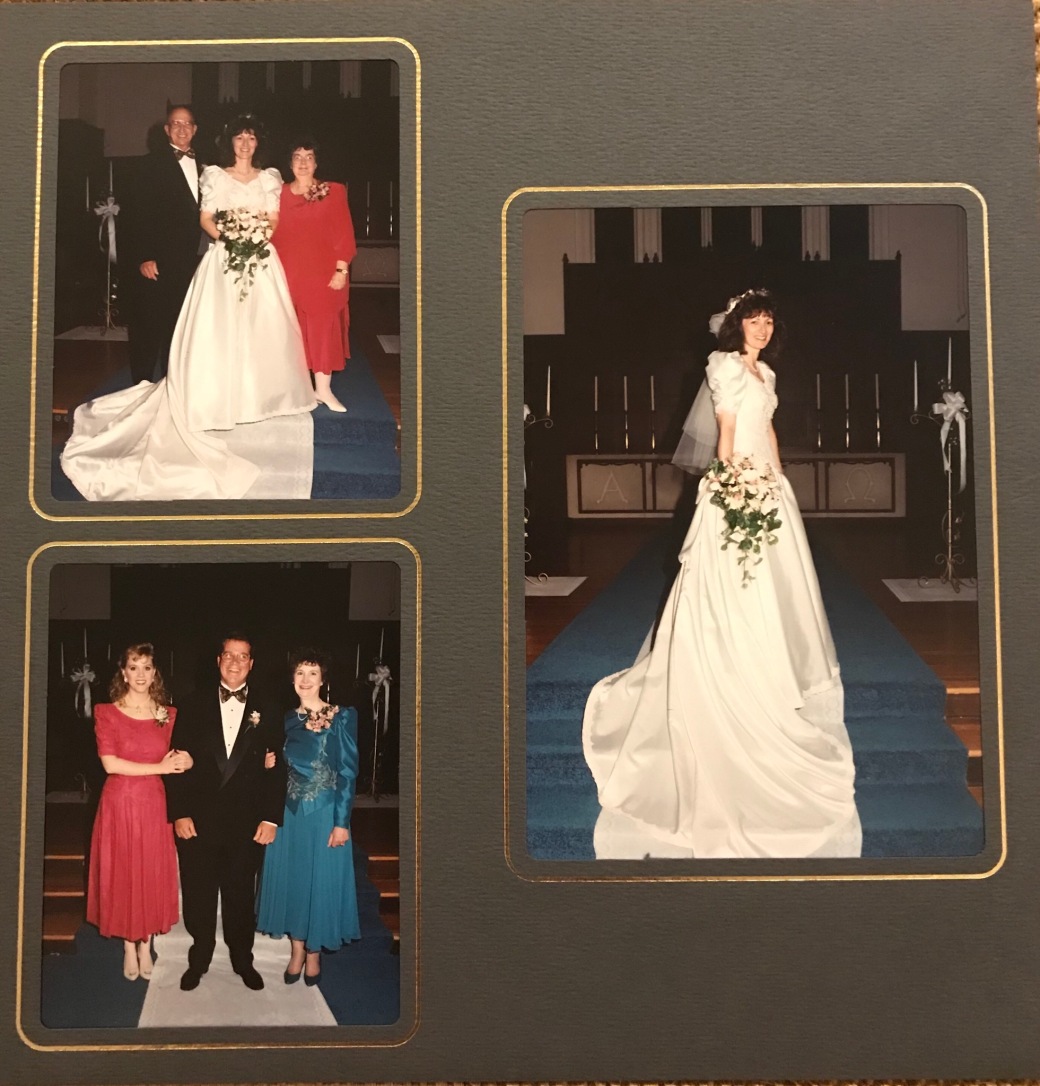 The wedding party after the ceremony.  Yes, we followed tradition and didn’t see each other that day until I walked down the aisle.

And we have the married couple. 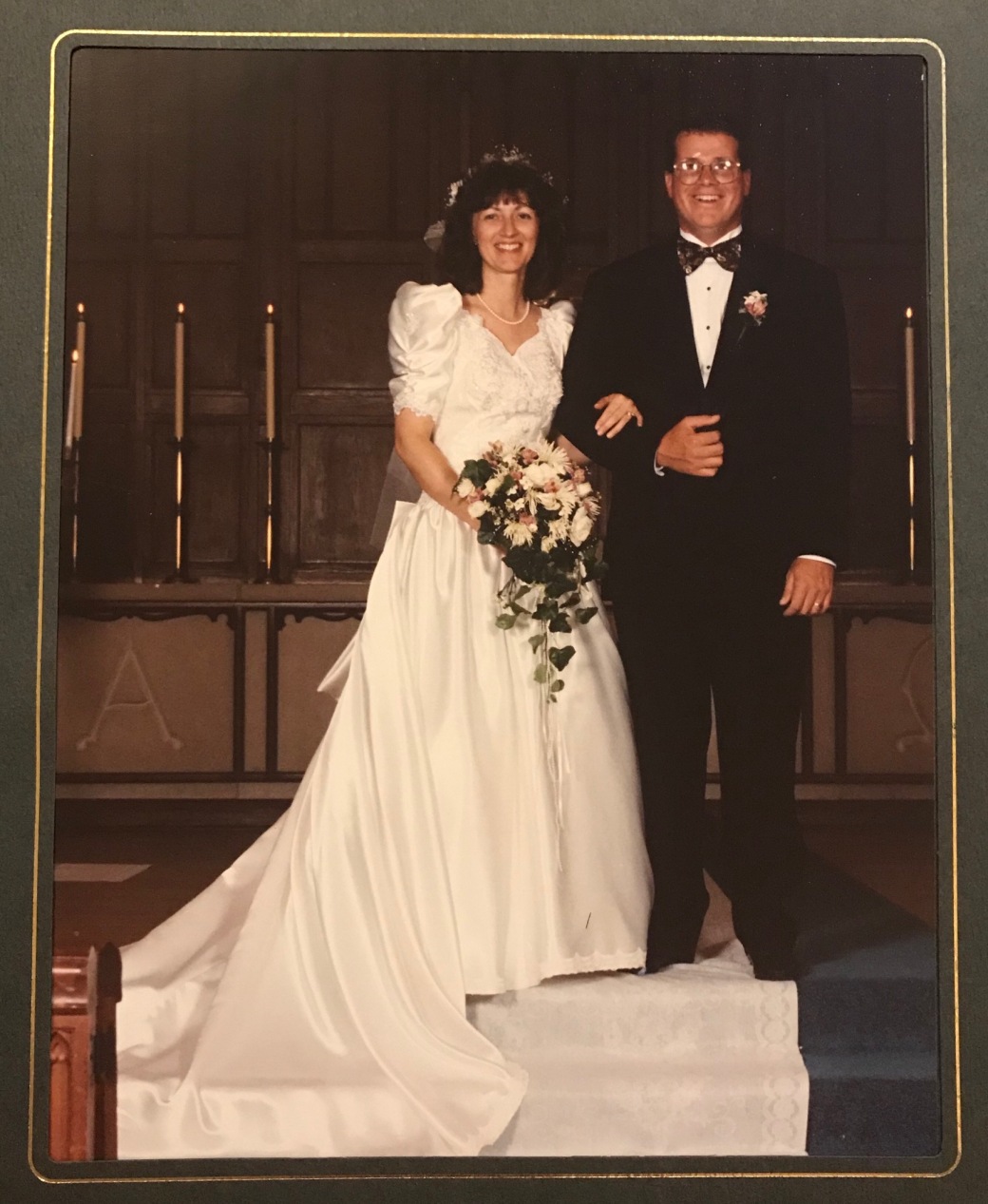 The major stress is over, we now can enjoy the reception, being with our friends and family that traveled from afar.

Eric danced with his mother while I had the ‘father-daughter’ dance (oops didn’t get that photo before writing this). 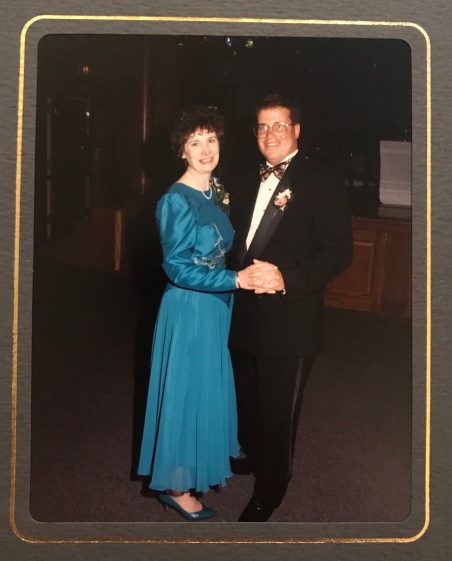 I had to include this photo, while not the best shot, there’s a story behind it. 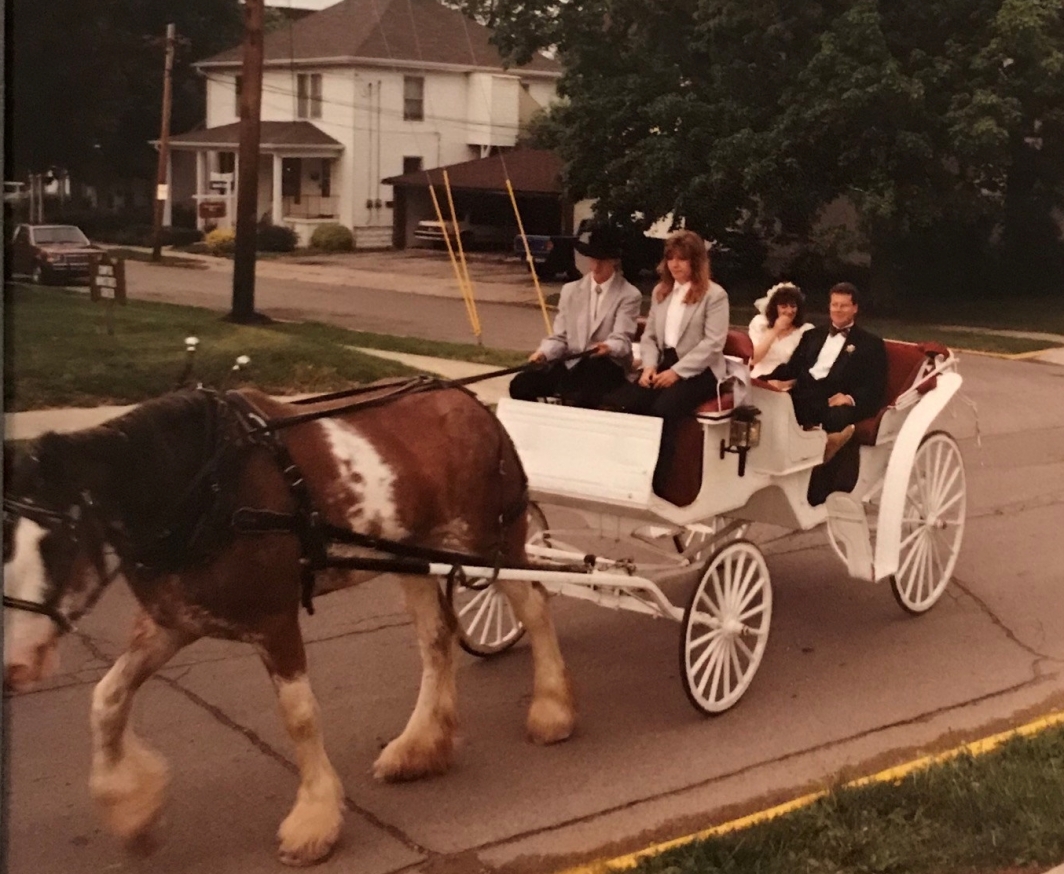 As a surprise, mom had arranged for a horse & buggy to take us around the campus to enjoy a quiet moment after leaving the reception.  A month before the wedding, the horse died .  She found another guy who had a horse & buggy  with a wedding carriage, then that horse died.  She found this guy shortly before the wedding, and (yeah) the horse lived to be a part of the festivities.

This was one of my favorite photos.  It was taken after the ceremony in the church.  In the photo with the wedding party, a railing can be seen.  The photographer had us sitting on the railing for this shot.  It’s a little hard to see but we included a few ‘Mickey’ touches for our wedding and Eric’s bow-tie is a Mickey paisley print. 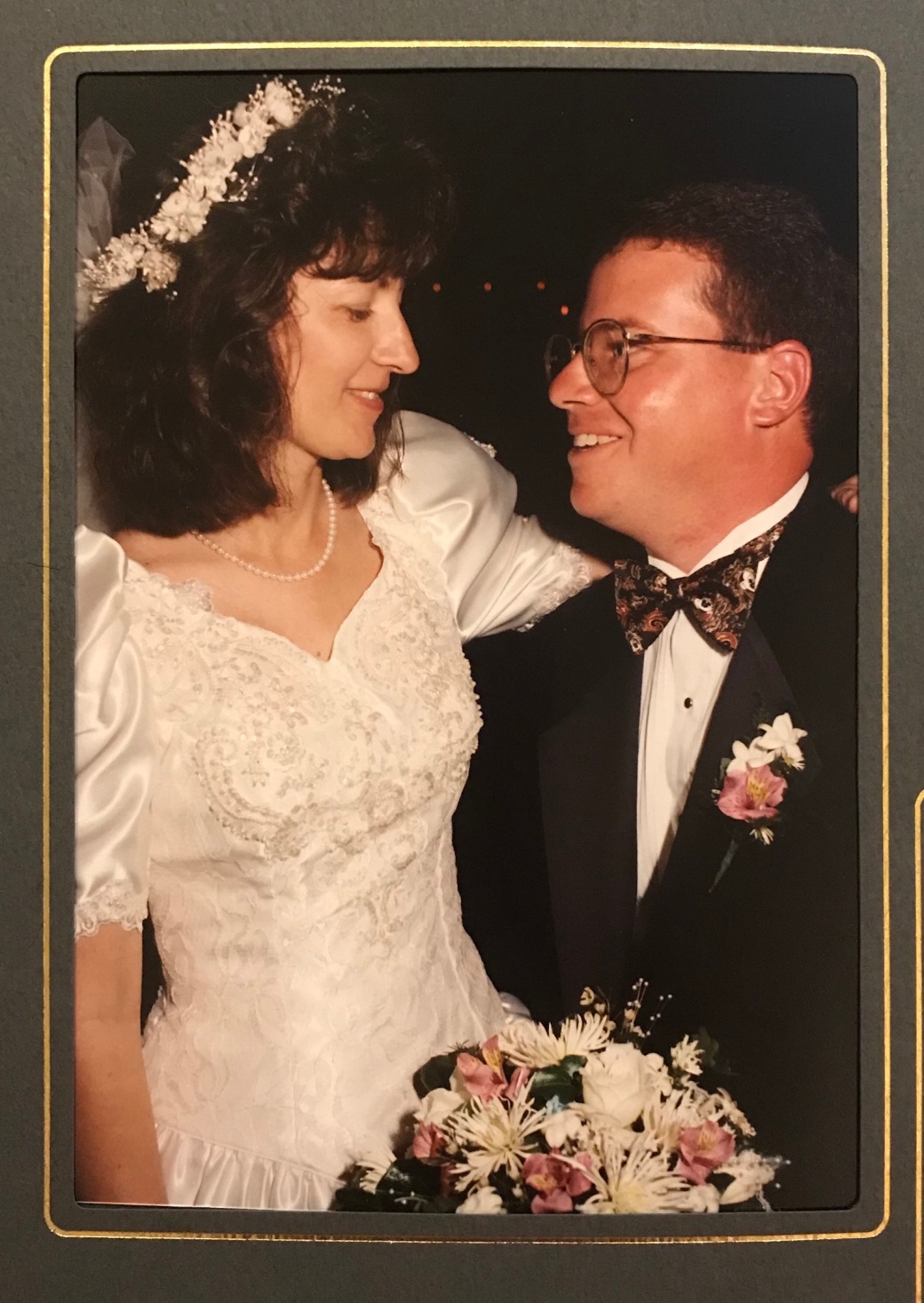 There you have it.  I was not ‘bridezilla’ and took things in stride-kind of a necessity when you live 1000+miles away and planning an event.  But no wedding is complete with out a few ‘interesting‘ stories.

My maid of honor had a baby 2 weeks prior to the wedding date. They were traveling  from  NC and was so concerned about what baby stuff to bring they forgot a key item she needed for the wedding. They were in the next state when she asked her husband to pullover so she could look in the trunk. Yep, they left her dress.  After calling her sister, the dress was taken to their UPS store with the barest of addresses (truly, it was a rural route address & they didn’t have easy access to my parents names).  UPS took the dress when they heard  the story (I think they enjoyed the challenge) and yes, it beat my maid of honor to Indiana by 2 hours.

Then there was the story where my future mother- in- law made the petticoats for all of the bridesmaids dresses.  Since the participants came from different places, there was no time for this last detail until everyone arrived for the wedding.  The night before the wedding she was in the hotel hallway fitting each of them while also adjusting the length of their petticoats.  It was all about timing!

And finally, Eric wanted me to include this story.

He and his best man had free time before the wedding and the town was have ‘Heritage Days’ that weekend.  They went on a historical tour, part of which stopped at the local bank.  This bank has one claim to fame…….it was robbed by John Dillinger and his gang in 1933.  It was the first of a 4-state robbery spree and the biggest bank robbery of Dillinger’s career, stealing over $75,000 dollars.  The lady giving the tour, Edith Browning, was working inside the bank that day and was the same lady giving the tour on the weekend.  She was a friend of moms.

I’m hoping we have another 25 years, but you never know what life will throw at you.  Happy Anniversary dear.