Throughout this blog there are occasional glimpses of my aunt that lives with us.  While there is a nice ending to this post, the path was fraught with many unknowns.  At the moment, Cranes View Lodge is the ending

This journey began when my aunt fell during the night several weeks ago and didn’t alert us.  I woke up early to get my coffee and found her on the floor in her bedroom.  Although we could get her to sit up, she couldn’t stand, therefore  the next call was for paramedics which came out of the Clermont Fire Station. 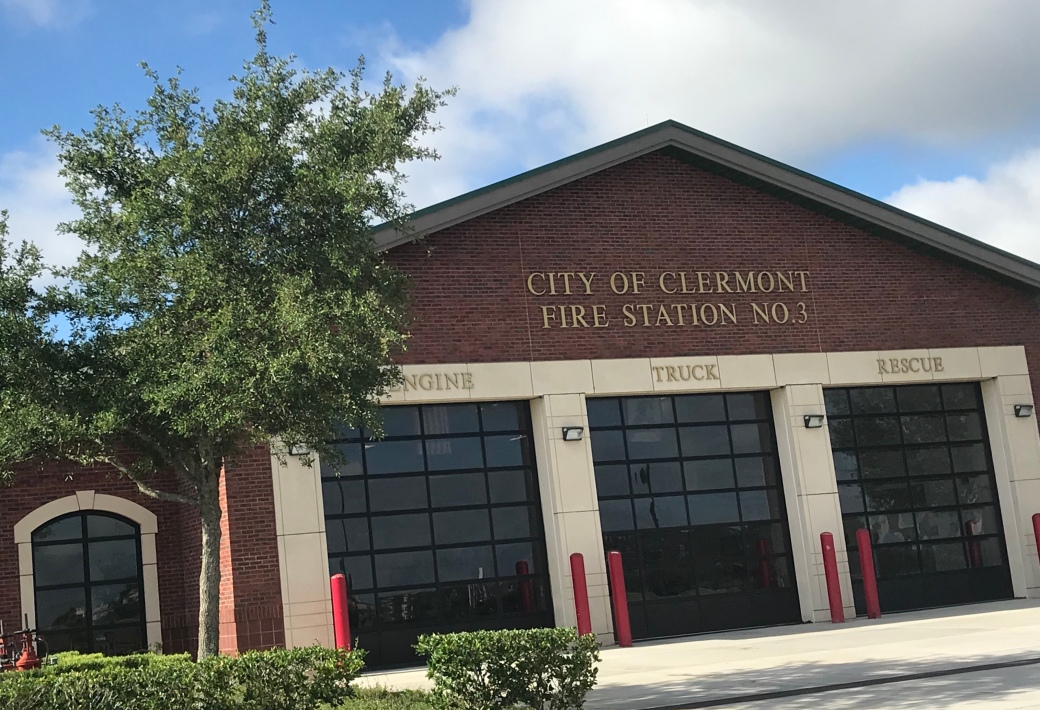 After getting her vitals they could tell something was wrong with her right hip and next stop was the South Lake Hospital.

Through the years myself or other family members have been admitted to various local hospitals, but being at this place had the added bonus of being close to home.  The last time we were here was for grandma and they have greatly expanded their building and facilities in the last fifteen years.

After x-rays it was determined she broke her hip and would need surgery.  Now the question was one of timing.  This occurred on a Sunday and because of its location in Lake county, surgeries are not regularly scheduled on the weekends.  It became a matter of finding all the necessary staff.  6 p.m. a surgical nurse came in, said to grab my stuff they were getting her prepped for surgery.  When the doctor arrived at 630 p.m., everything needed to be ready to operate.  Man!  Things happened fast after that.

The doctor walked in, talked with both of us and showed me her x-ray – definitely broken.  😦    Seventy minutes later he walked out, said the partial hip replacement surgery went fine and now the healing begins.

Twelve hours later, the nursing staff had her up on her feet and taking a few steps in her room.  Two days later, she was moved to a nearby Rehab Center, Sky Top View Rehab.

It literally is on top of the hill behind the hospital – definitely looks like one of the higher parts of town. It’s a fairly new, small facility (40 beds) and again, bonus of being close to home.

Okay, so now a (short) rant………..Medicare pays for 20 days in a rehab, average stay is 14 days, however they wanted to release her the morning of her 10th day.  What?!?  Eventually learned that Lake County is in an ‘accelerated Medicare release’ program which seems to boil down to saving Lake county some dollars and the families not so much.  Okay, I’m done.

We quickly had to find interim accommodations without knowing how to navigate this path.  Thank goodness for Google!!!!  Eric found this agency and their director quickly got in touch with us, efficiently arranged several Assisted Living tours located around us – within 24 hours.  Sara Woodward was my contact and she was a godsend.  Would definitely recommend going this route!

Not only that, she accompanied me.  She knew the ins & outs of the system, talked the ‘medical’ talk and knew what questions needed to be asked.  Once the tours were done that morning, called Eric and my sister……………decision made –  Crane’s View Lodge Senior Living facility.  It is a gorgeous facility and fairly new.  The architecture is reminiscent of the Northwest.

Upon completion of 23 pages of paperwork sent home with me………another 12 pages emailed to me the following day to read and sign……………..we had a 1-bedroom apartment.  Now, I’m not sure I mentioned this……..Eric is out-of-town for his job.  Yep, got to do most of this myself.

Next step, moving day.  Oh yeah, nothing comes furnished so you have to bring (or buy) furniture.  The next several days were sorting & cleaning furniture, organizing supplies, purchasing a few groceries and gathering more of her clothing.  I made one trip myself and then waited for a friend to help with the second trip.  She also stuck around when Eric returned to help with all of the heavier stuff.  Her previous moving experiences definitely made this easier for me. 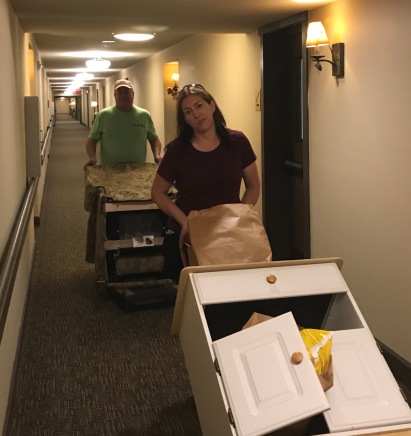 One day later, my aunt arrived.

During my initial tour, I saw many resident doors decorated and didn’t want my aunt to be left out.  Apparently, it’s a ‘thing’.  Darn good thing that Hobby Lobby is only a block away – just saying. 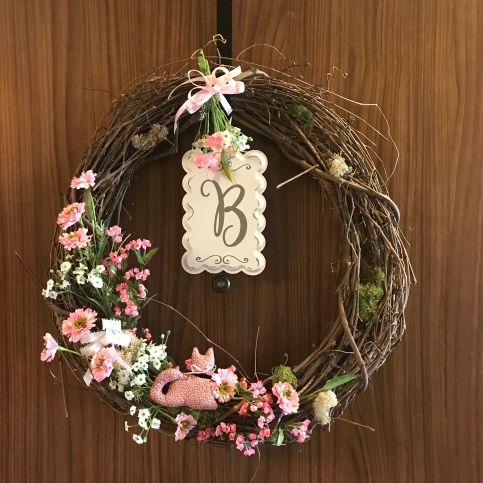 And while more things can be added to her apartment at a later date, it was ready for her to arrive.

So there you have it.  It’s been a journey, with a learning curve and a few bumps along the way.  We left her settled in her favorite chair, watching game shows.