Our first entire day in Freiburg was to be a Black Forest Tour with Simone.  Awe-Some!  I should state now, while I tried to keep everything straight, some of my facts may have gotten mixed up.  I didn’t take notes, so this is mostly from my memory. 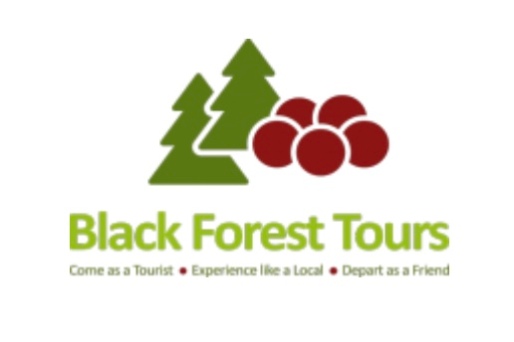 Eric found the tour through Trip Advisor and it definitely did not disappoint.  I’m definitely a fan of using Trip Advisor, both to find things to do and to read the reviews that others post.

~I wanted to throw in a few facts occasionally, so they are mostly bullet points in a different color.~

Eric had been corresponding with Simone for a number of months and once the time got closer, she sent a pretty extensive survey to us so she could really tailor the tour for our tastes.  The survey asked about our goals for the tour, anything special we wanted to see or do, lunch options, hiking length (if any) and numerous extra options were listed  gauging our level of interest for the region.  Got so say – best way (ever) to run a tour company.

She picked us up at 10 am (our request) and spent the next several minutes going over the survey I completed with her ideas to best accomplish those goals – perfect.  Since we had already walked around the local market at the church, we headed out of town.

First stop was in Zarten at a farmer’s store for local product and products.  While not the best photo with the sunlight, here’s the front of the shop.  Lots of apples and pumpkins since the fall harvest season was here.  The bottom photo shows some of their local apples with a strand of hops behind it (generally used to make beer).

At the very far right edge of the first photo above, you might notice some white round containers.  These hold ‘new wine’.  It’s only available for a few weeks out of the year but it could be either juice from apples or grapes and the fermentation has just started.  Delicious!  I tried it at this place and drank it several times during the week.  Once the boys arrived and they tried it, we got several additional bottles to drink during the week.  The different colors could be due to the variety used and/or the length of time for its natural fermentation. 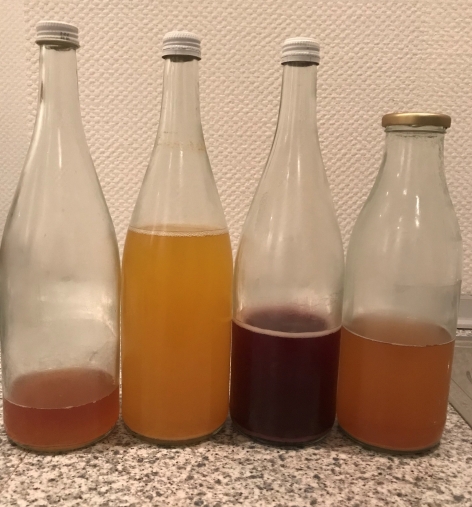 This was also the chance to try local schnapps – which I did at 10:30 am, wowser!  I only had a tiny sip of the cherry flavor, but it was mighty powerful.

Right down the road, Simone took us to a farmer that was creative with additional revenue sourcing.  Many farmers have rooms they are renting out like a hotel for visitors but this gentleman went a bit further.  While yes, the poster is in German, I thought it was a novel way to increase revenue for his farm.

He let customers buy ‘shares’ to visit his farm, which gives the kids chance to interact with animals.  There are brushes sitting nearby so the kids can brush and touch the animals. 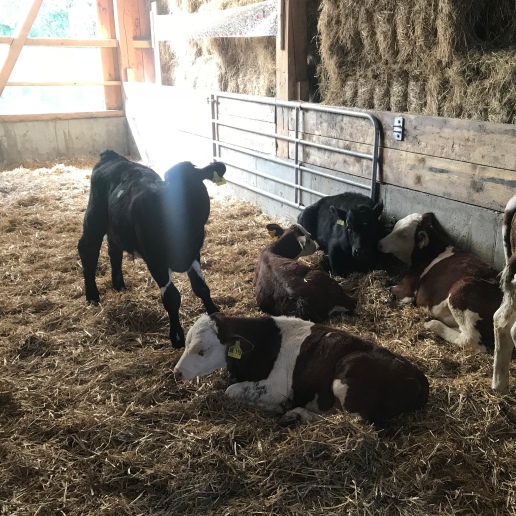 In addition to a small market store, he also had this vending machine for his products.  Even if someone stopped by when he was closed, they still could get local butter, meat and cheese.

We found this chicken running around and guests could get free-range eggs.  A few places on his farm we saw this box to be used as the honor system for paying for their veggies. 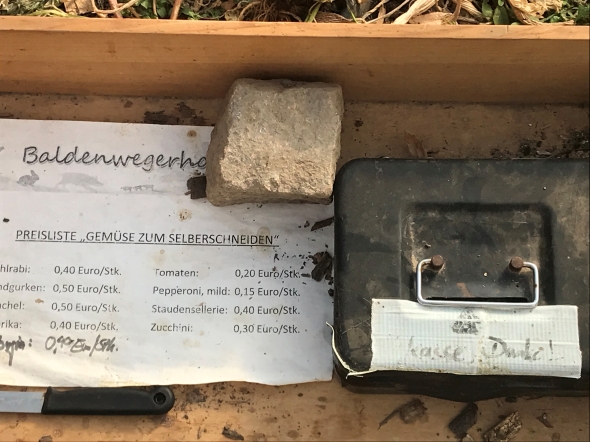 We did a quick walk in their farm store and I found a fruit I hadn’t seen before – quince.  It was crazy busy inside with customers buying their produce, fresh meat and baked breads.  The little piggies and cows seen above, turned into meat for their butcher shop – sorry Karen. 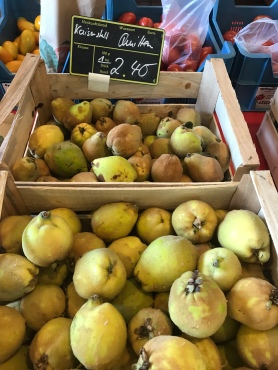 And of course I LOVE the pumpkins.  🙂  Seeing this little bit of farming was perfect for our tour. 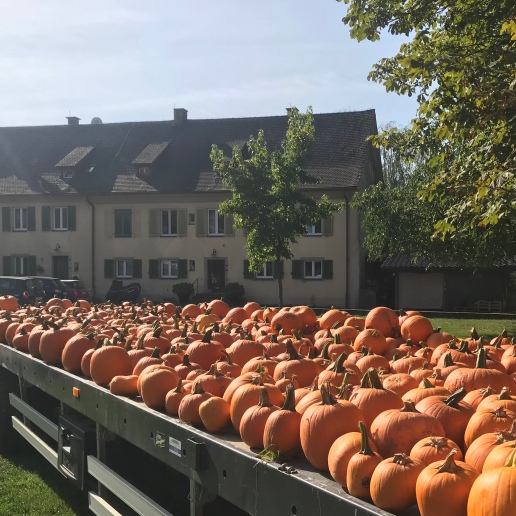 Next on the agenda was a stop at St. Peter’s Church. 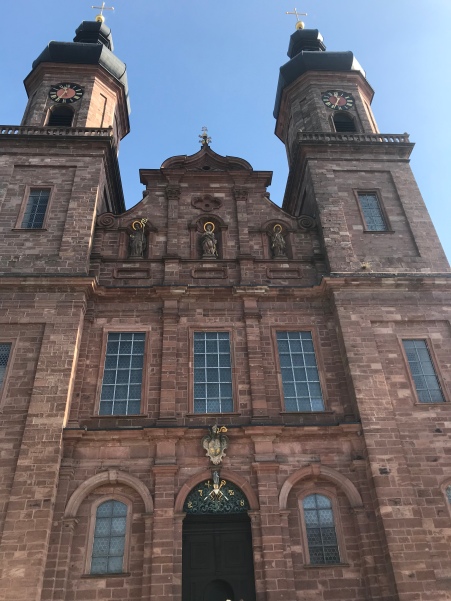 The inside was as striking as the outside.  The organ was magnificent.

The story goes in 1093 a duke and his wife founded the Benedictine Abbey of St. Peter in the Black Forest. Through the years the church suffered through four fires and survived numerous wars, yet remained largely unscathed.  One reason the church is still mostly intact was that the abbey did not become a ‘stone quarry’ for the local parishioners to build their own houses, but instead the buildings were used as storage.  This is an absolutely fantastic example of a church that survived through the ages and my photos do not do it justice.  This was on the ceiling of the church and was one of many beautiful things to photograph.

Simone continued to share stories about life in the Black Forest.  One example being this ‘barn’.  The original use for the building (with the tractor) in front was two-fold.  The upper front half was used for the family, while the back half was used for their equipment and grain.  Down below the livestock were kept so everything was in one building.  A number of farmer’s had their own chapel built and you can just barely see this one, between the tractor and the new farmhouse. 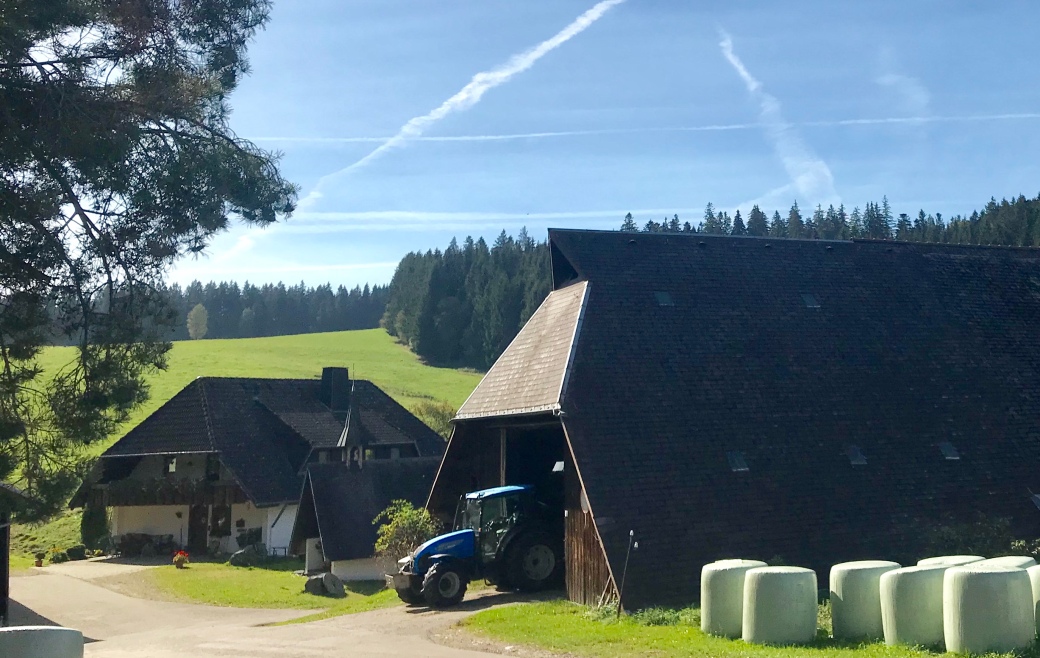 Another stop was the small town of Geschwend which had several all-wood houses that are still in use today. 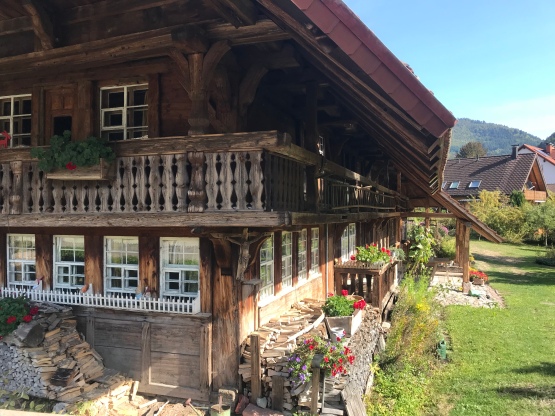 Driving through the hills and valleys, we occasionally came upon some cows that were too cute to resist a quick photo.

And then Simone took us to the perfect spot for a photo.  We parked the car, I got a quick shot surrounded by the Black Forest……..

……….while Karen and Simone headed towards an overlook.

It was so quiet and peaceful and several benches were available to sit and take in the scenery.

Since our goal was to truly soak in the scenery and take photos, our lunch plans called for a picnic instead of a sit-down meal.  Simone took us to Titisee, a resort town, where we had sandwiches made to order.  I got a taste of black forest ham and that totally was my selection for my sandwich, along with cheese and cucumbers.  A glass of white wine completed the picnic meal beside the lake.

One option mentioned on her survey was a short hike to a waterfall and we both said yes!  We stopped in Todtnau and a short hike later, found this. 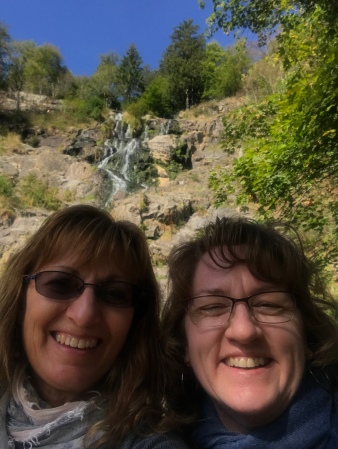 All too soon, it was time to head back to Freiburg, but Simone made an extra stop when I asked about these gardens.  The plots can be rented fairly cheaply, but the cost to maintain them and follow all of the rules can be high.  😦  Some are very elaborate and would be a great place to grow your own veggies and have friends come over.

Simone gave great suggestions for restaurants and a walking city tour, along with ideas for when the boys joined us.  There were so many things to do in and around Freiburg and truly not enough time on this visit.

She dropped us off near a trail to climb and look over the city.  Naturally, we climbed to the top for these views and to see this statue guarding the city. 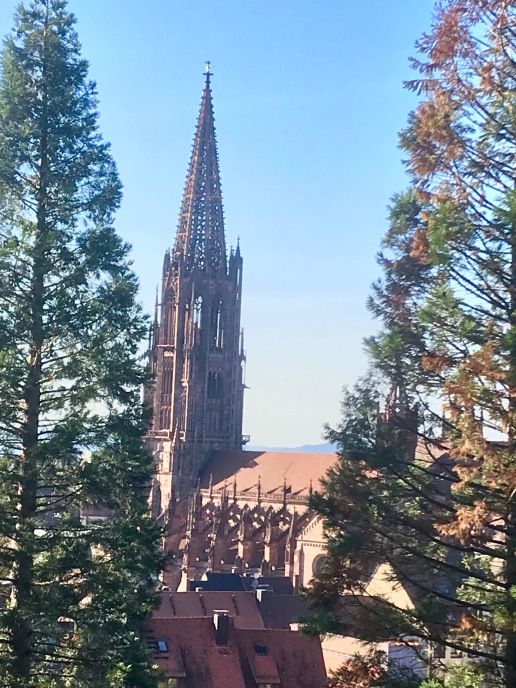 We took her suggestion for a German meal and ate at Ganter Brauereiausschank for dinner.  We could see the church out our window.

I ordered the Schweinaxen with the potato dumplings and sauerkraut while Karen ordered the pork schnitzel with potatoes.

It was a fun-fill day with a remarkable person, ending with a German meal.  Now I want to end with a few flower photos taken throughout the day. 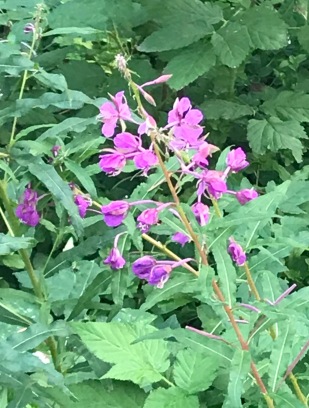 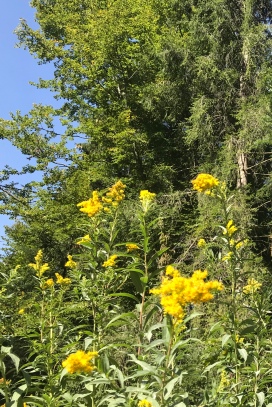