Eric got a call over the weekend that his aunt was not doing well and to prepare himself for the worst. As things turned out, we needed to be in Taylor, AR within a week. 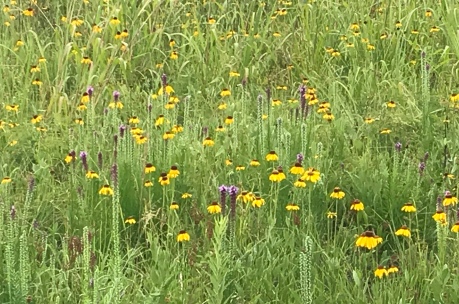 Flights were hard to come by both coming and going.  We needed to fly into Shreveport,  LA  then drive almost an hour to where his family lives.

We both worked before  heading to Orlando International Airport early afternoon.  There was an article in the local paper that parking at the airport was getting tight.  OMG!  At terminal A, signs said they were full, but we didn’t believe them.  You see for years we have parked in an area, known mostly by locals – and hard to find – ‘terminal top parking’.  Once we entered the garage, the ramp to go up to our secret spot was blocked off.   Guess we should have believed the signage.  😦  There were cars everywhere going up and down the aisles.  Quite frankly, it was a zoo.

Plan B (which I should call Plan C) had us driving to the new terminal (which is not open yet) and park in that garage structure (which is called Parking C). Yikes!  Timing wise we were ok with catching our flights, unlike other conversations we overheard.  On the upside, we will probably never see this terminal this empty.

Of course the airport had to have another spur for their shuttle and man, this shuttle was brand, spanking new.  Definitely had that ‘new car’ smell.

We were able to get a different view of the air-traffic control  tower. 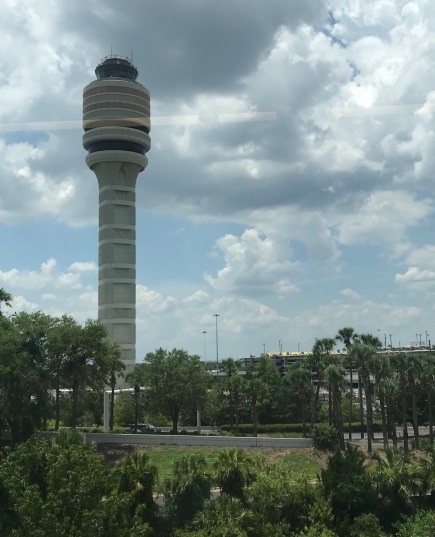 Even though Terminal C is not opening until 2020………..thank goodness for the parking garage being complete. 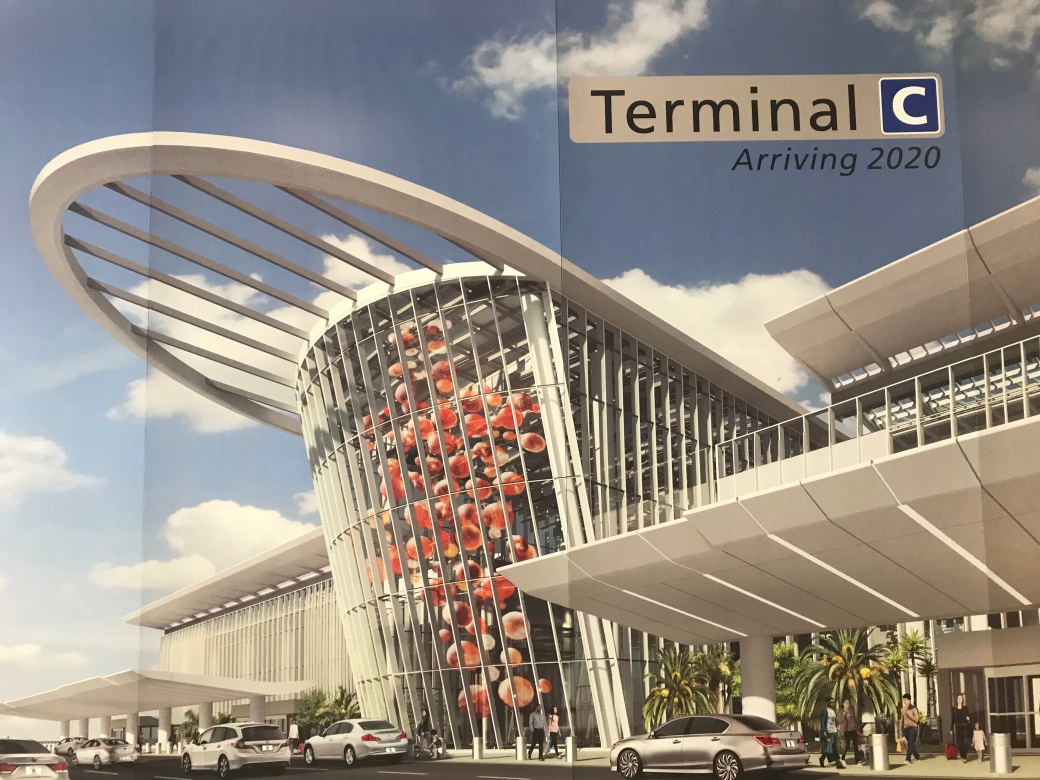 Our flight got to Atlanta on time and although we could not get into the Priority Club due to capacity, we made good use of our time by grabbing food from The Varsity.

The Gordy family started this place in 1928 while the interstate nearby  was a grass field. This location is now downtown Atlanta. They’ve got multiple locations in Atlanta in addition to their location in the airport. It’s basically a hot dog and burger joint and they’ve developed their own language for ordering.  Here’s how you order:

After a short time we were finally able to enter the club and partake of their refreshments.

Okay, so it’s ‘cool’ to be able to enter this restricted area, but with this being  my 3rd club to visit, I’m not really impressed about Atlanta’s Priority Club.  Food is nothing special, only a few options and anyone with a sweet tooth gets to choose from a few options of  packaged cookies normally available at a grocery store.

Made it to Shreveport that night, found our hotel and after picking up his sister the next day, we headed to north to meet up with the family.  I had forgotten how a small close-knit community welcomes and takes care of their own.  Friends, neighbors and church members brought over food to feed the entire family our first evening in town.  Eating at his aunt’s house was bittersweet for me.    This is where we stayed when we came as a couple.  I believe his aunt would have enjoyed our gathering at her house as she offered up her home for countless family events in the past.

While sadness prevails at a time like this, there’s also life.  So many little ones were running around or being held or being fed or………you get the picture.  Life continues and blossoms. Eric’s cousins have grown up, gotten married and have families of their own.  With Eric’s yearly visits deer hunting, he’s been able to keep up with most of those details – me, not so much.

Eric made it his mission to reintroduce me to the area.  We drove around, visited family when we could and enjoyed life in a small town.

During part of our travels, we went through a town called Plain Dealing LA.  How do you cool off when there’s no community pool…..………….your local fire department!  These firemen were much appreciated by the kids playing in the water spray.

Another day we visited Ruston, LA for their annual peach festival.  Who knew that LA could grow peaches? I had a fabulous peach-lemonade that was mighty tasty.  It was perfect for the super hot day we visited. 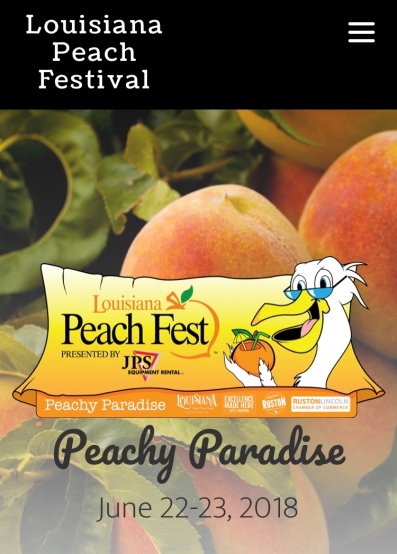 Trip Advisor talked about several restaurants, but one stood out – Ponchatolous. 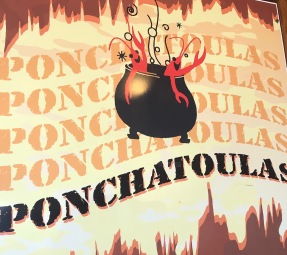 Upon arrival to Ruston, we discovered it was right downtown in the middle of the Festival.  We figured the 30 minute wait would be well-spent perusing the festival.   Fairly quickly we were seated and we started with fried green tomatoes, followed by seafood gumbo (Eric) and fried mini meat (beef & pork) pies for me.  My mini pies were perfect!  Lots of crust, a good dipping sauce and just enough filling. 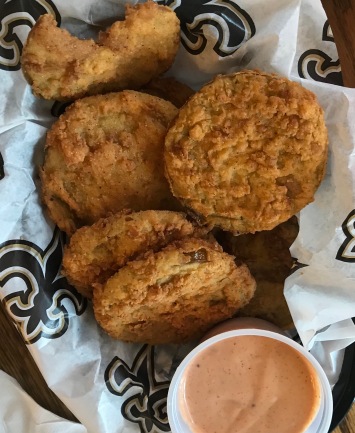 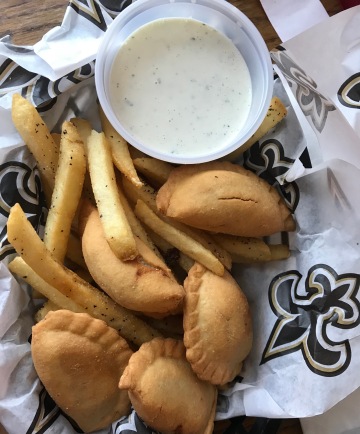 On the way out-of-town we found a farm stand that had peaches we could purchase.  Let’s just say that were sweet and juicy and WAY better than any I’ve bought at our grocery stores.

One morning, we had breakfast at another aunt’s house and while the breakfast goodies (and company) were excellent……………..

…………..I really enjoyed the walk and personal tour in her backyard fenced garden. 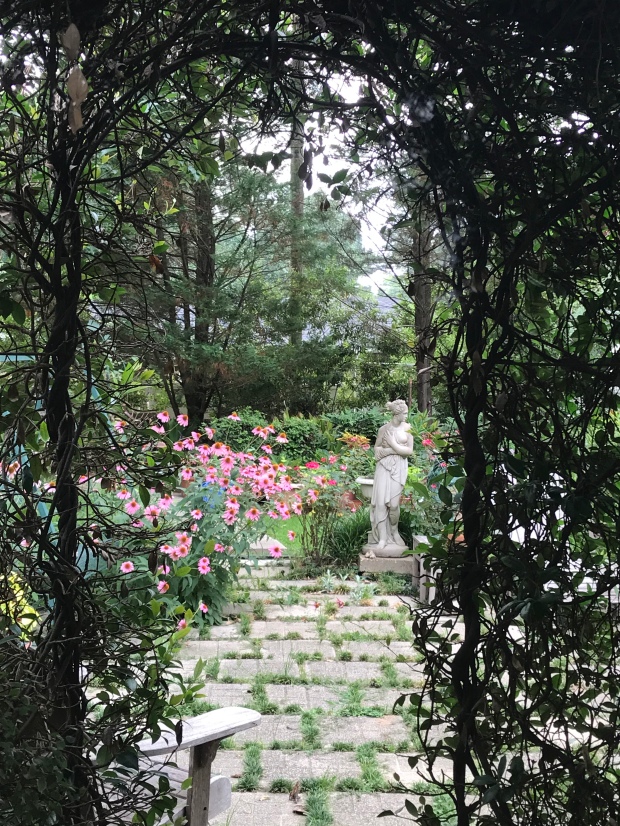 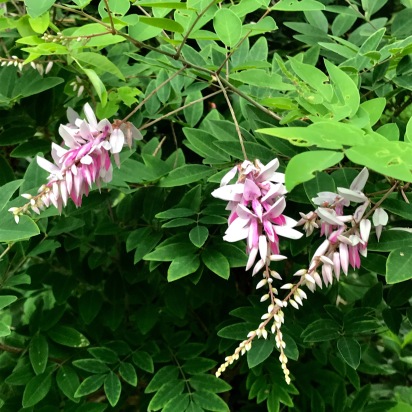 She mentioned a rose called Seven Sisters.  It intrigued me and I later discovered it’s an heirloom rose that flourishes in the South. Named due to the flower clusters, typically with 7 blooms.  I believe she mentioned that she got a shoot from a friend, stuck it in the ground and it flourished.

We spent some time with Eric’s uncle and while I grew up in a rural area, my parents didn’t farm.  I couldn’t resist a photo of his white cows (semmital crossed with Brahma cows).  Eric explained that his uncle kept the gentlest cows from each birthing.  Any cow showing too much ‘crazy spirit’ was sold off.

Then there was a story about this pipe fence.  The pipe was used for drilling, but it broke loose, falling hundreds of feet, curling upon impact.  When the pipes were eventually retrieved, they could no longer be used for that purpose.  His uncle had a use for those pipes, and this is the result.  Interesting how ‘up-cycling’ (the latest trendy phrase) can bring beauty to a thing of necessity.  I couldn’t figure out how to get the best photo, but from a distance, the charm was apparent.

One of Eric’s cousins has taken a family outpost and created a retreat for their kids and their families.  I’m simply calling it The Farm.  These two buildings  was to be our home for the next several days while we visited family.

The cabin housed a king-sized bed with a full bathroom.

The brick building was the main hub for family gatherings.  Leather seating and antique furniture mixed in with the modern-day appliances and a long farm table was picture perfect and almost a shame we had it all to ourselves. 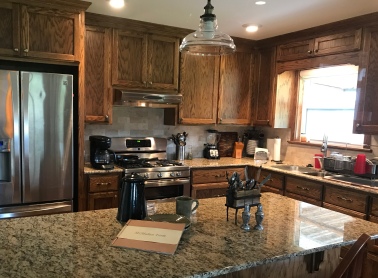 Eric cooked a few breakfasts and both were excellent:  eggs Benedict w/ fruit on the left and fried eggs & bacon with English muffins, topped with peach jam on the right. 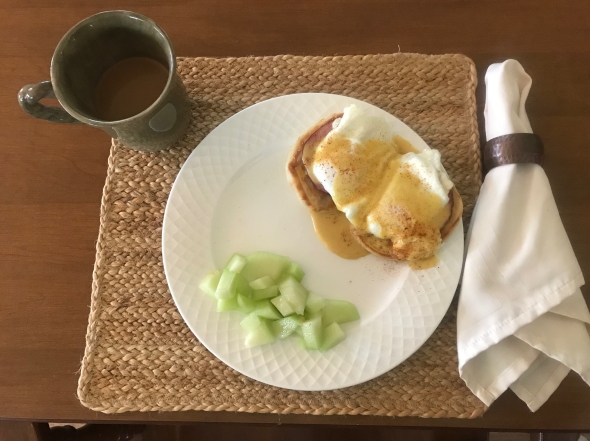 Yes, these are cows, just regular mixed breed cows, but they were part of our peaceful week in LA, surrounding us while we stayed at  The Farm. 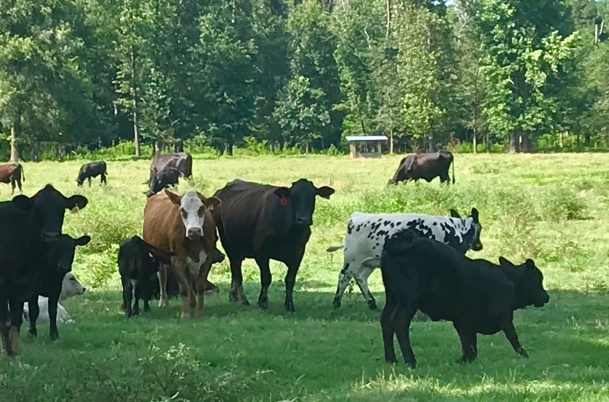 Family gatherings for this purpose are not truly wanted but do have a healing infuence.  Coming together from across the land allows those in attendance to share fond memories and stories while forgeing  friendships we carry with us, long after leaving the area.

One morning I got up and walked the lane while the sun was trying to peek through the clouds.  It’s a memory that I want to keep, especially when I”m back home and everything is getting hectic.  Peaceful and quietly magical.