We have driven  and flown into Shreveport in the past, but never spent any time in this city – this time we did. 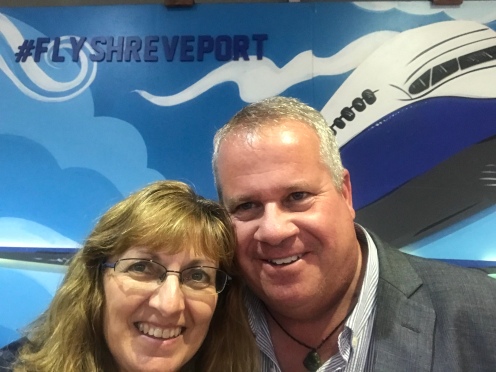 Getting in late, our hotel reservation was at the downtown Hilton. 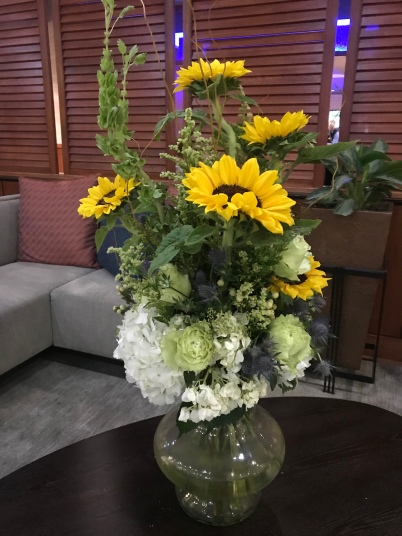 We made the most out of our first full day in the city, having donuts at a top-rated donut shop first thing  at Southern Maid Donuts.

There are numerous independent donut shops in this area but this was highly rated. The warm glazed donuts did not disappoint.  Eric has made me a big fan of Community Coffee and I was happy to see it being served that morning. 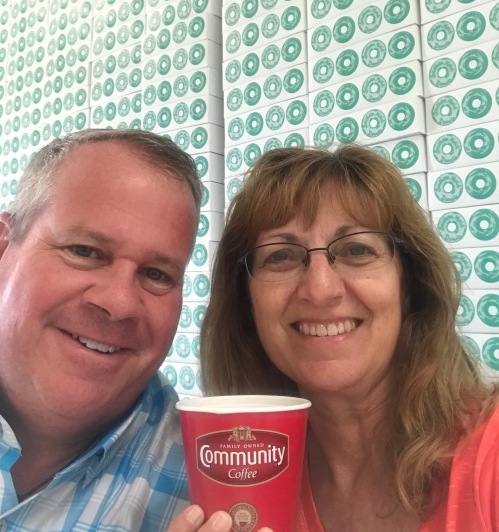 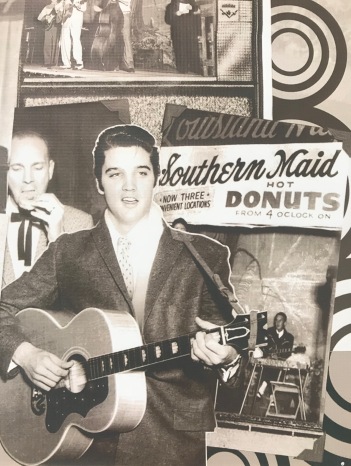 Before picking up Eric’s sister we had time enough to visit the American Rose Center on the outskirts of Shreveport.

Although summer is here, there were enough clouds and breezes to make this an enjoyable walk, even at 12 noon. 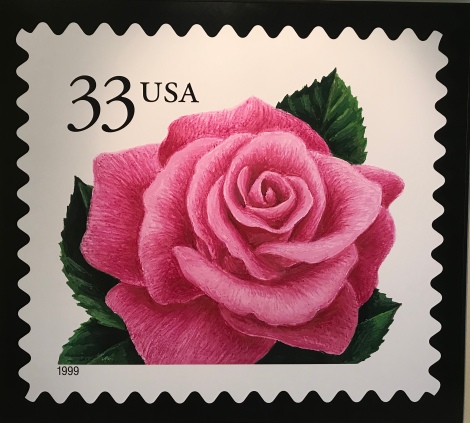 Next up was lunch and Eric found a highly rated Cajun-creole restaurant called Marilynn’s Place.  It’s a former gas station and while the outside lacks ‘charm’, you come here for the food being served inside, not the charm outside. 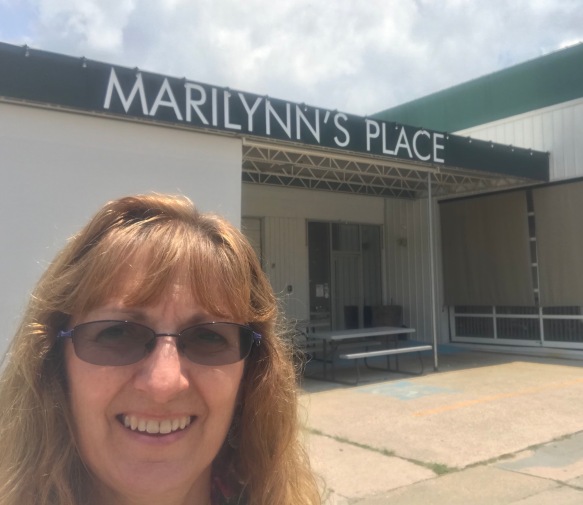 Eric ordered their seafood combo special and got a bowl of crawfish etouffe’ and a bowl of seafood gumbo.  He was surprised at the quantity of food, but he managed.  I ordered the catfish fingers and they were great, actually, more than great.  I would stop back at this place just for the catfish fingers on any future visit to Shreveport.  Fries came with my meal and while I’m not the biggest fan of steak fries, the seasoning they used on them made me keep coming back to eat them until the basket was empty.

With his sister’s plane being delayed, we had time to squeeze in one more stop – Strawn’s Eat Shop.  It was billed as ‘best pie in town’.

We split a piece of their ‘seasonal’ pie, which was peach – OMG.  The photo below doesn’t look like much, but this was hands down one of (if not the) best pies I have ever eaten.  I’ve always eaten peach cobbler, of which the fruit is cooked.  This peach pie has fresh peaches and all of their delightful sweetness comes through.  They grow some mighty fine peaches around here – just saying.  Yes, they actually grow peaches in LA.  More about that in the next posting.

Before leaving Shreveport, we were able to squeeze in one more ‘pie’ visit, just before they closed and both ended up with their strawberry pie, which they are truly known for.  It was very good, but it wasn’t peach.  🙂 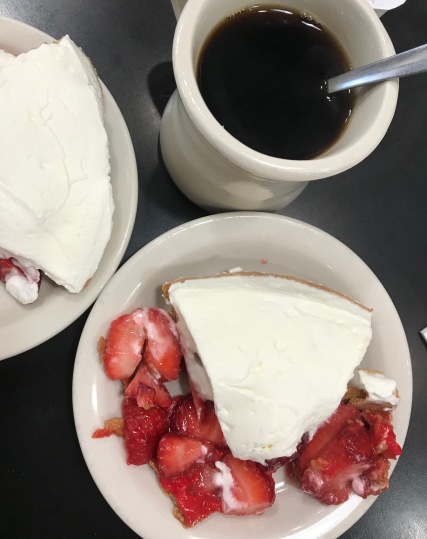 Did a little research about this place and found out that Mr. Strawn opened this location in 1944, across from the Centenary College campus.  It was purchased by another family in 1988, seating was expanded and their family still runs the three Strawn’s locations.  They have been featured in Southern Living Magazine and on The Food Network.  Everyone definitely needs to check this place out when visiting Shreveport.

As with a lot of American cities, several micro-breweries have popped up in the city.  Our last day in Shreveport before flying out, we visited two of their three locations.  We couldn’t hit the third one since it wasn’t open on sunday – bummer – as it looked the best of the three.  Oh well, next time. 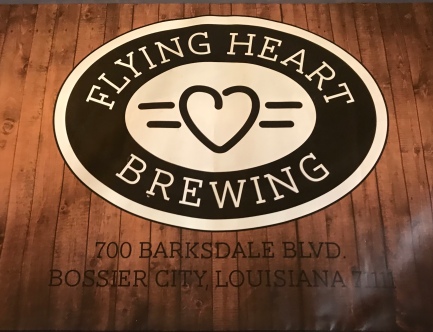 It was an interesting place, a nice gathering spot for locals.  The neighborhood was being rejuvenated and although we didn’t order pizza, I saw a few customers come in just to pick up a pizza and not drink a single beer.  The beer was fine, not memorable, but drinkable.

We got some snack food (pretzel and wings) and while it was satisfying, it wasn’t anything that we would go back for.  They do have some cool graphics around their establishment, so I threw them in.  So I guess I’m making a statement, without typing the words……..

It was a huge warehouse-type building and they had enough room for a musician’s stage.  We heard later that evening was open mike night – which would have been interesting.  This would be a great place to have a party or large gathering.

Below is a snapshot of their offerings.  Eric tasted the seasonal Captain’s Porter while I drank the Penalty Block.  He also had a 5-oz pour of their anniversary beer.  They were brewing before being open to the public and they saved some of their first attempts for their yearly anniversary.  We both felt their beer was much better than our first stop………….and we brought home a 32 oz growler and tulip tasting glass (for me).

Out last meal was at Ralph & Kacoo’s – an well-established seafood restaurant, rated #1 in the Shreveport/Bossier City area. 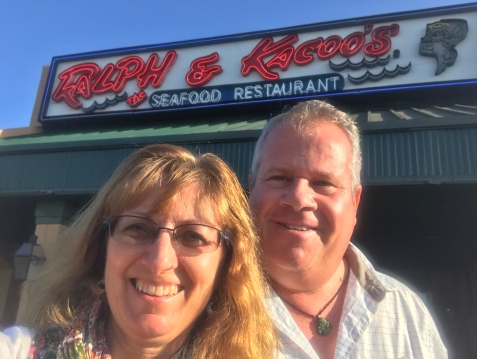 This is a great place for large groups and families as they have lots of tables for group seating.  We had an excellent waitress, but the place felt kind of ‘tired’.  Nothing was wrong, but there was also nothing that would draw us back.  Eric’s meal was all about shrimp, coming out three different ways on his platter.  I was finally tired of fried food and ended up ordering an avocado & crab salad. 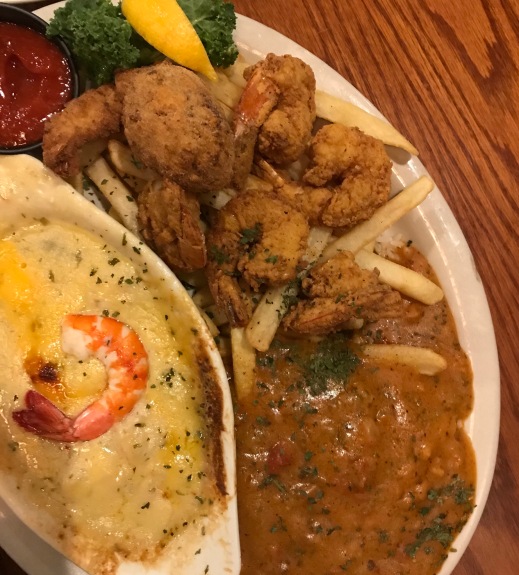 My salad was amazing – hands down, my meal ‘won’ between the two of us.  This is something that Eric will be making at home.  The crab was just enough seafood to make it different and the meat was very fresh. I asked about the ‘secret’ Ralph & Kacoo’s dressing (and requested it on the side), as I was skeptical and ready to ask for ranch dressing.  Eric needed to taste the dressing so that he can make it at home – it was that good.  Kind of a cross between thousand island dressing and a roumalade combined.

All in all, we enjoyed our time in Shreveport.  No, this isn’t a city full of night-life and Yes, it’s in the South (really, really hot in the summer) but it has a nice history, minimal traffic and we found it easy to navigate.  Visiting a local museum about the history of Shreveport, we came across the origin of their name. 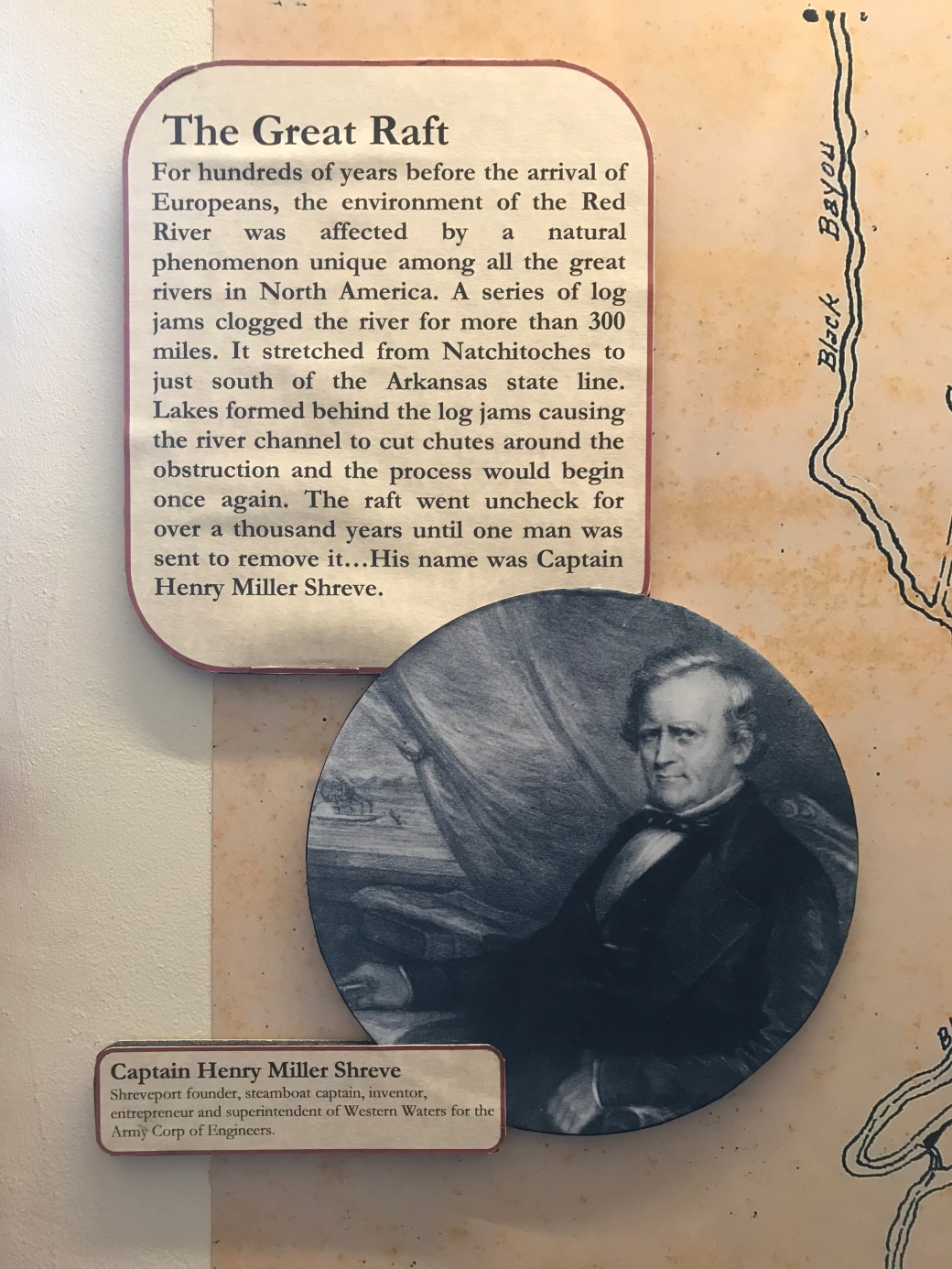 We will be coming back through this city, most likely on the way to Eric’s family events, and now we have a few favorite places we will visit again.