By definition………a type of restaurant found in Lyon, France that serves traditional Lyonnaisse cuisine, such as sausages, duck pate or roast pork (straight from Wikipedia!).  There are approx. 20 officially certified traditional bouchons in Lyon with the emphasis on a ‘convivial atmosphere and a personal relationship with the owner’.  Before leaving home we had (by chance) seen Anthony Boudain doing a show from Lyon where he visited several bouchons and our destiny was set. 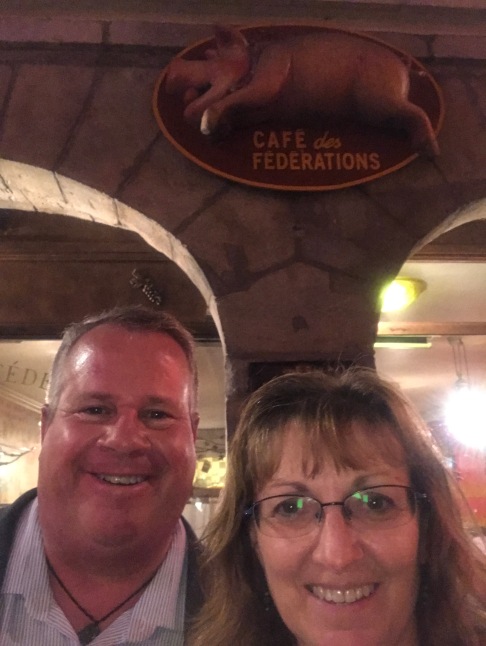 Our first dinner reservation was at Café des Federations, 9 Rue major Martin and since we’re in France, we’re walking to our restaurant, not driving or taking a taxi.  🙂

Bouchons are small in nature, generally one room and this one had 6 tables and it appeared like we were the only non-French customers. 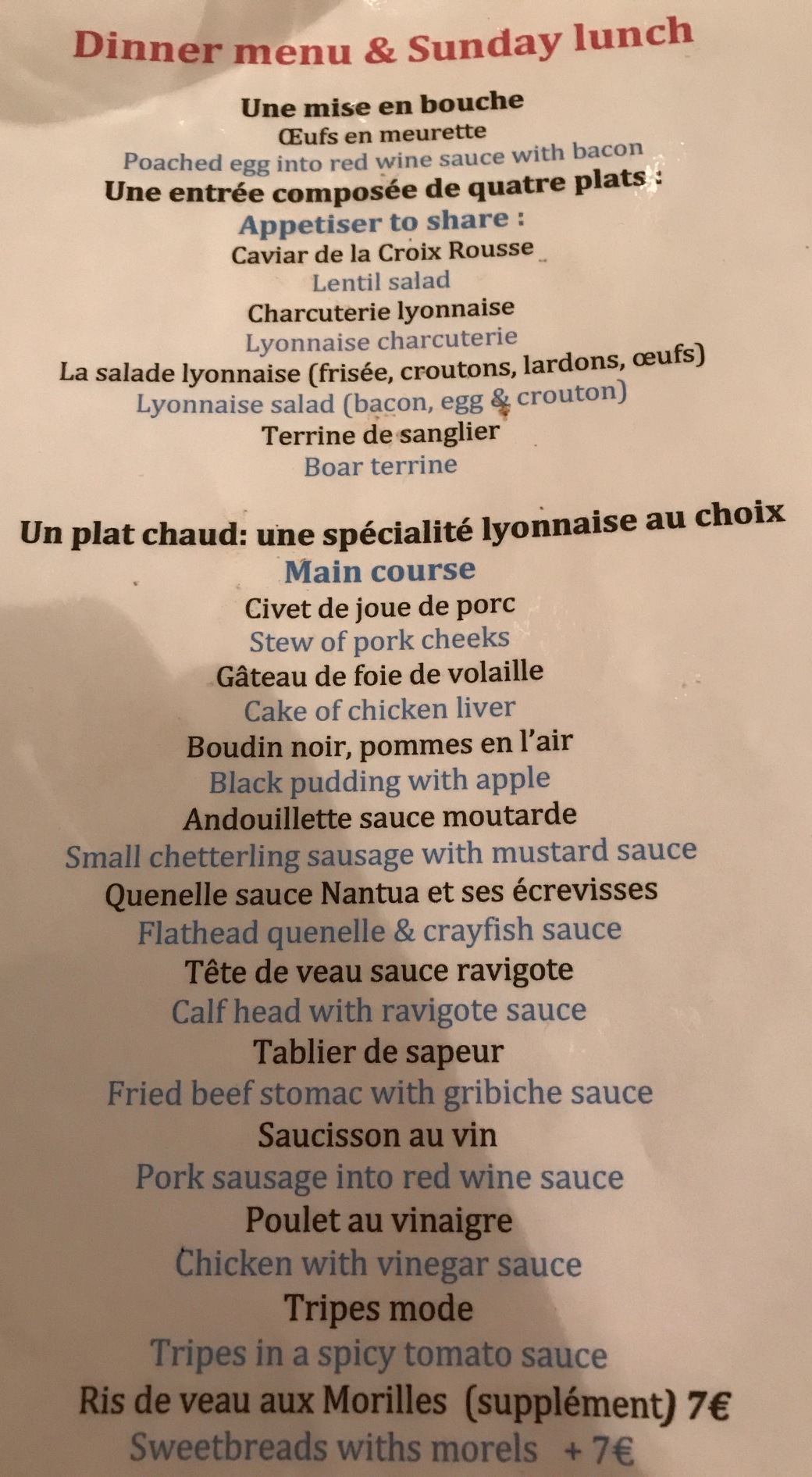 with each customer selecting their main course and dessert.  I’m holding you in suspense for our main courses.  Most of our friends can probably guess my selection, but guessing Eric’s is more of a challenge.

First to arrive was the poached egg – bacon makes everything better – followed by the small plates to share. 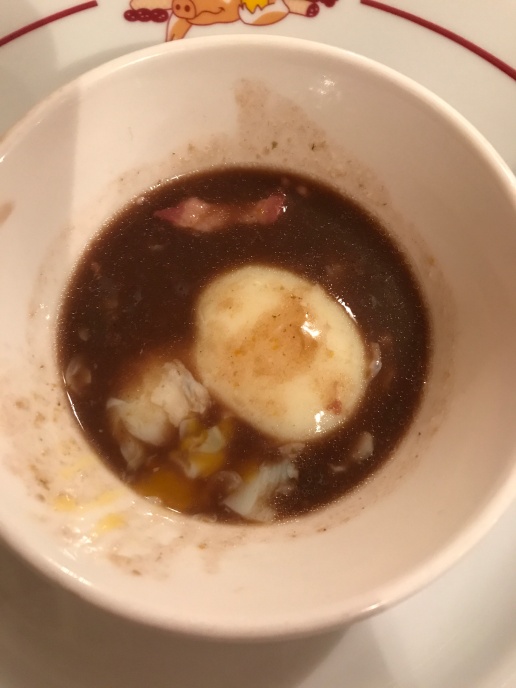 Afterwards came our main entre.  I ordered the chicken in vinegar sauce (delicious by the way).

with Eric ordering the ‘stew of pork cheeks’.  He had seriously been considering the fried beef stomac but too many ordered it at lunch that day and it was not available for dinner.

This was followed by a cheese course.  There was one plate used in the bouchon and when you were ready, you could select as many or as few cheeses as you wanted.  This was followed by dessert.  We both ordered the vanilla ice cream with brandy-soaked raisins and black currant fruit sauce. 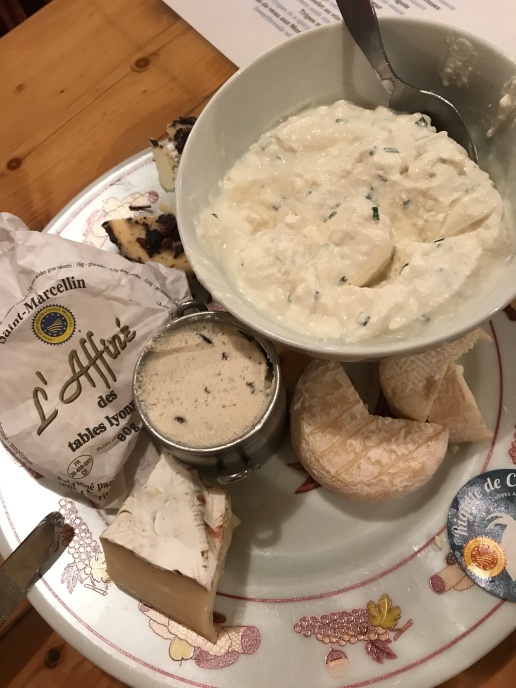 The patrons and waitress generally add to the experience and this was no exception. 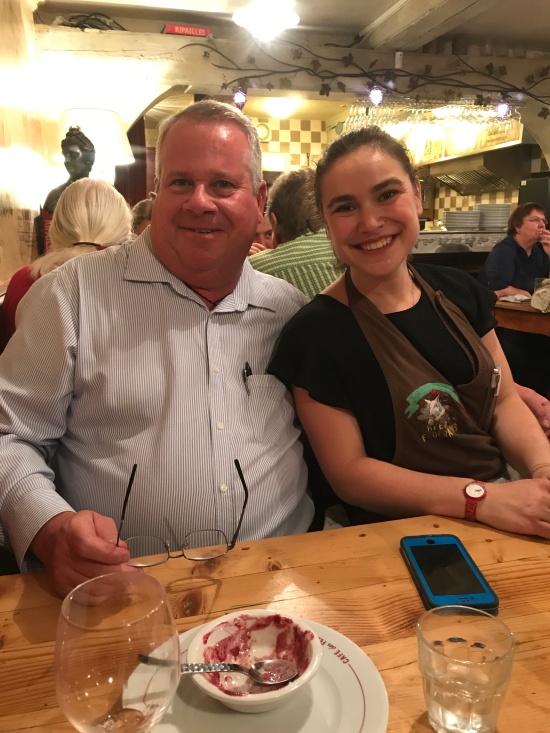 We walked home to work off some of the calories. 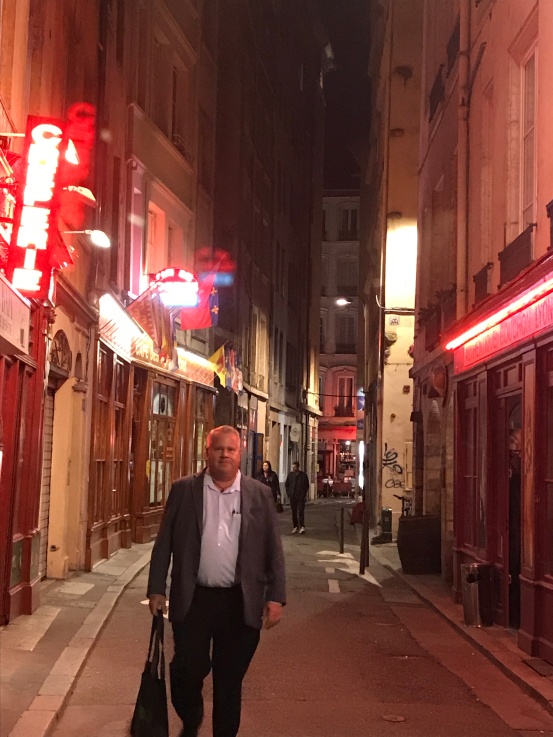 The tradition of bouchons came from small inns visited by silk workers passing through Lyon in the 17th and 18th centuries.  The name derives from an expression for a ‘bunch of twisted straw’.  A representation of these bundles began to appear on signs to designate the restaurants and the restaurants themselves become known as ‘bouchons’. 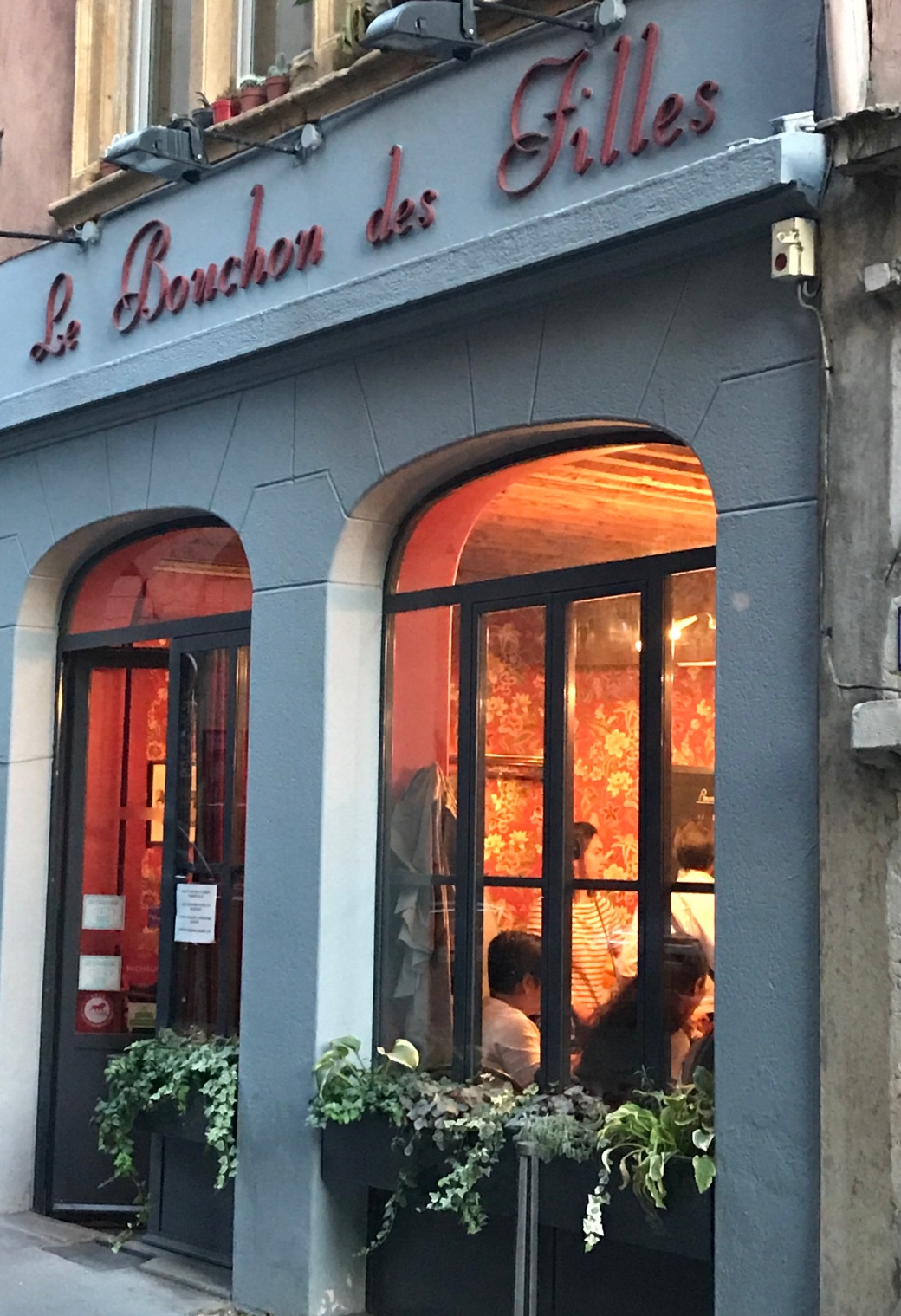 This atmosphere was more lively, more crowded and we were part of a community table, always a fun time.  We became used to community tables on our first trip to Germany and have always enjoyed talking with our ‘neighbors’. 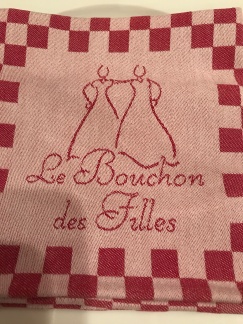 While no photo of the menu, it had much of the same entres as the previous one. Wine always starts our meal and this night was no exception.

We started with the ‘small plates’: cole slaw with salt cod (surprisingly good), lentil salad and pork  terrine.  I tried them all, but the cornichons (small pickles) were the only thing I could eat on the item at the bottom of this photo.   Of course, Eric loved the pork terrine.  Again, at least I tried them all.

Luckily, these glasses were only about 2″ tall – the photo does not tell the story well.  They looked green, smelled green,  tasted green and ‘green’ is not a color I will be eating again.  I tried 2 small spoonfuls and I was done.

Eric ordered the Boudin noir w/baked apples for his main course (top of photo) and I ordered the seafood Quenelle.  Mine was basically a seafood potato dumpling and quite good. 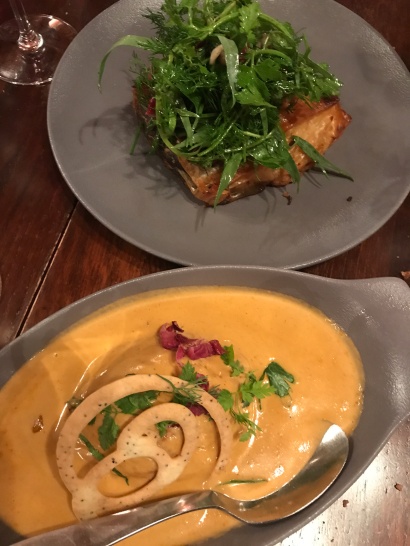 Eric had the lemon sorbet for his dessert course and I had their re-imagined ‘banana split’ (vanilla ice cream, fudge sauce, fresh strawberries and banana infused whipped cream) – I won, just saying.

This dining experience was still enjoyed as our first bouchon, but different.  On one side of our community table there was a young lady studying Electrical Engineering from Brittany, France eating with her her aunt & uncle.  On the other side was a family from Australia and their 19-year-old son had just signed on for a 6 month stint on a Burgundy rugby team.  This was their last night of a 5 week trip and the parents were flying out the next day.

We definitely found the bouchons enjoyable, but don’t necessarily need more.  We have a few more dining reservations before leaving Lyon and much more to blog.