So this was our initial preparation for Hurricane Irma at home.  We had a company come out several months ago and prune our trees away from the house, and yes, they even pruned the tree you see in the photo above.  But a sweet gum is not known for being a strong tree.  Once it seemed that Florida was not going to dodge this storm, Eric gave a lot of thought to taking this tree down and ultimately-as you can see-it was cut.  He and a friend got out their chain saws and started chipping away at the base.  They used our red truck to encourage the tree to fall away from the house (and the neighbor’s fence) and voila, the tree is no longer a threat to our house and the Florida room.

In 2004 the windows on the east side of the house leaked due to the wind & rain direction, so Eric added an extra layer of protection. 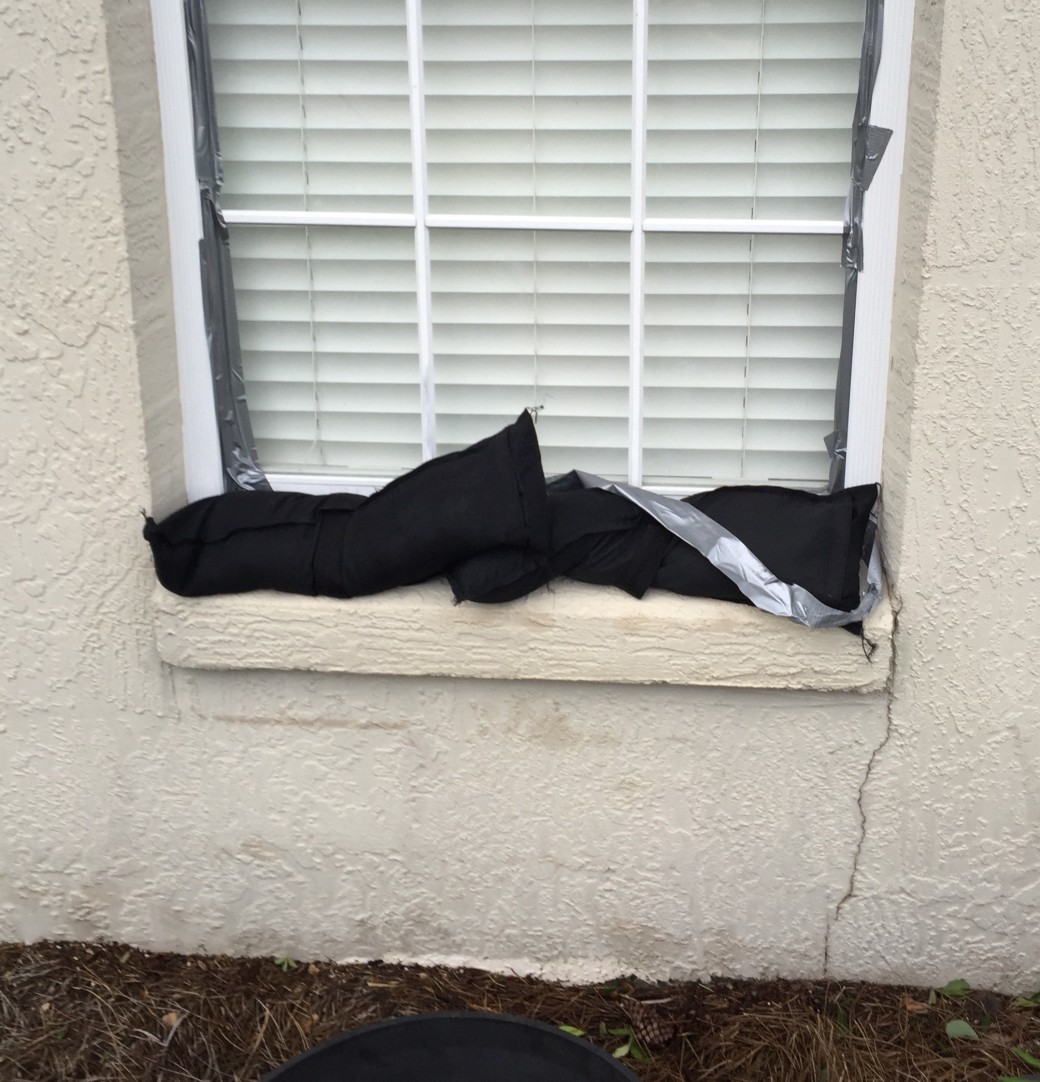 After that, it was hurry up and wait.  Moving the potted plants, bringing in outdoor furniture and laying down anything outside that could become a projectile meant we were ready for the storm to hit.

We had purchased water, drinks and ice earlier in the week, preparing before things became scarce – which it did.

Eric had cleaned out the chest freezer within the last several weeks,  so it had plenty of room for ice.

We pretty much assumed that our DirecTV service would stop since a good thunderstorm knocks out the service already.  But, who would guess………..we never lost the signal the entire time of the storm.  Hmmm, what does that mean.  DirecTV can control the strength of their signal, when they choose to?

We settled down to watch the storm approach, switching between The Weather Channel and local TV stations.  We started getting some storm bands after 9pm.

And by midnight, the center had jogged to the right and was going right up the center of the state.

One of Eric’s peers was in the hurricane command center on property and they continued to text throughout most of the night.  He said a particularly bad cell was coming after 2am and he told his wife (in Clermont) to take cover in their closet. 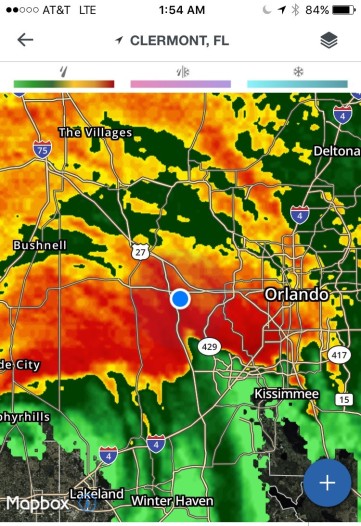 We all headed to our Jack & Jill bathroom for the next 1 1/2 hours until the majority of the bad weather had passed.  Once in a while we peeked out the windows to see the rain going sideways and listen to the howling wind.

We saw something interesting on the garage door.  One of our plants we brought inside the garage had a chrysalis on it and a monarch butterfly came out.  Being inside our garage definitely expanded its life since it was protected from the hurricane force winds. 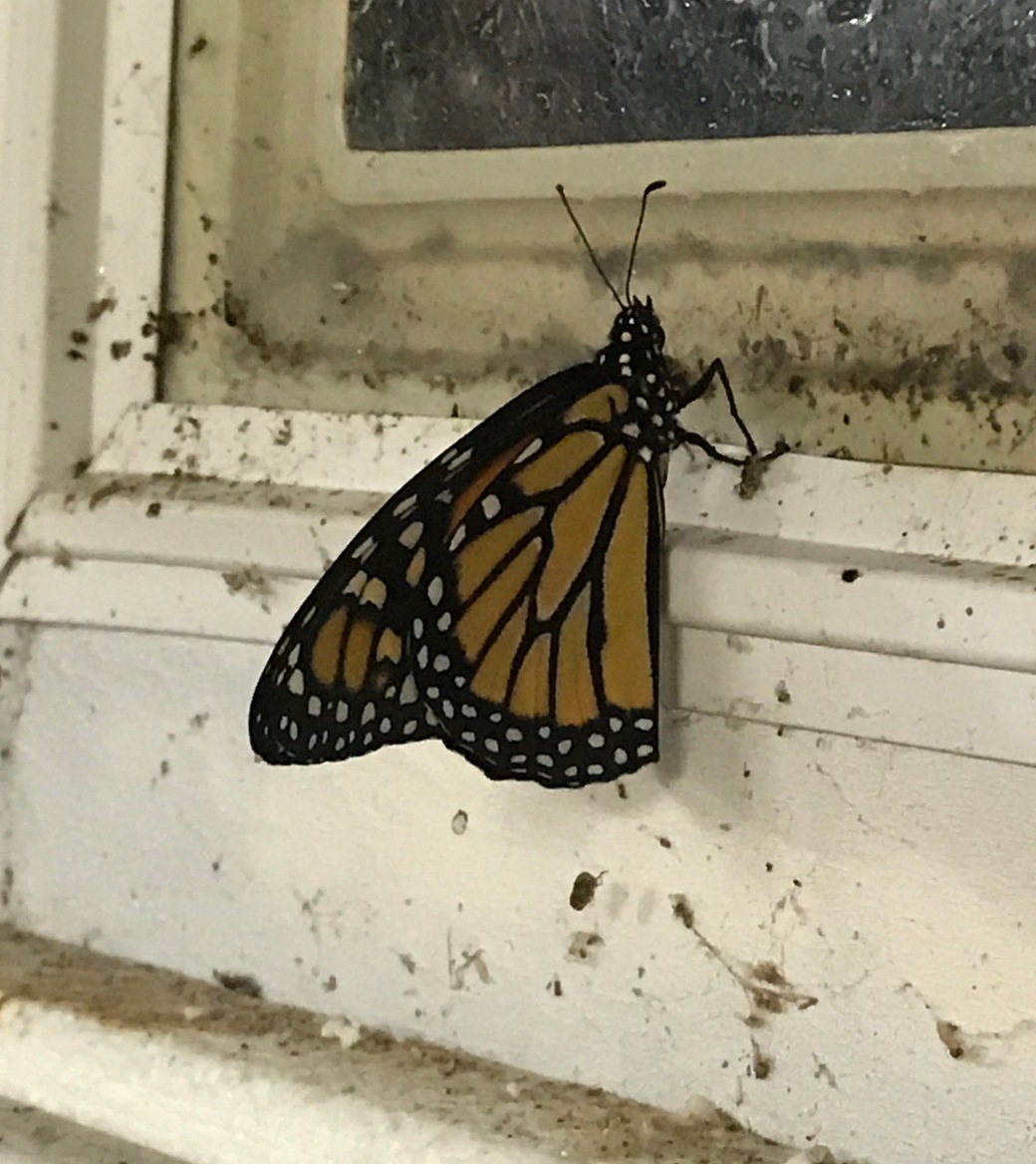 By Monday, the storm had left Florida and was hitting other states in the Southeast.

After a few hours of fitful sleep, we were able to go outside and see the damage.

Broken limbs in the loquat tree:

Jasmine vine came off the trellis:

And that noise we kept hearing from the roof…………………missing shingles. 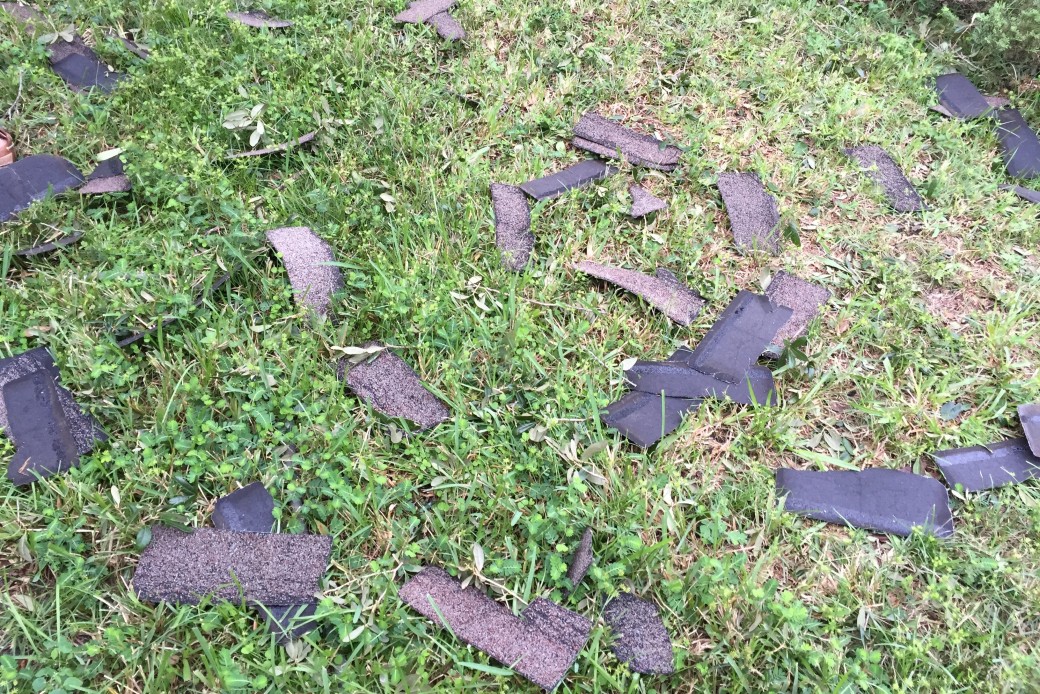 That tree he cut down last Friday, piece by piece, it will get to the curb. 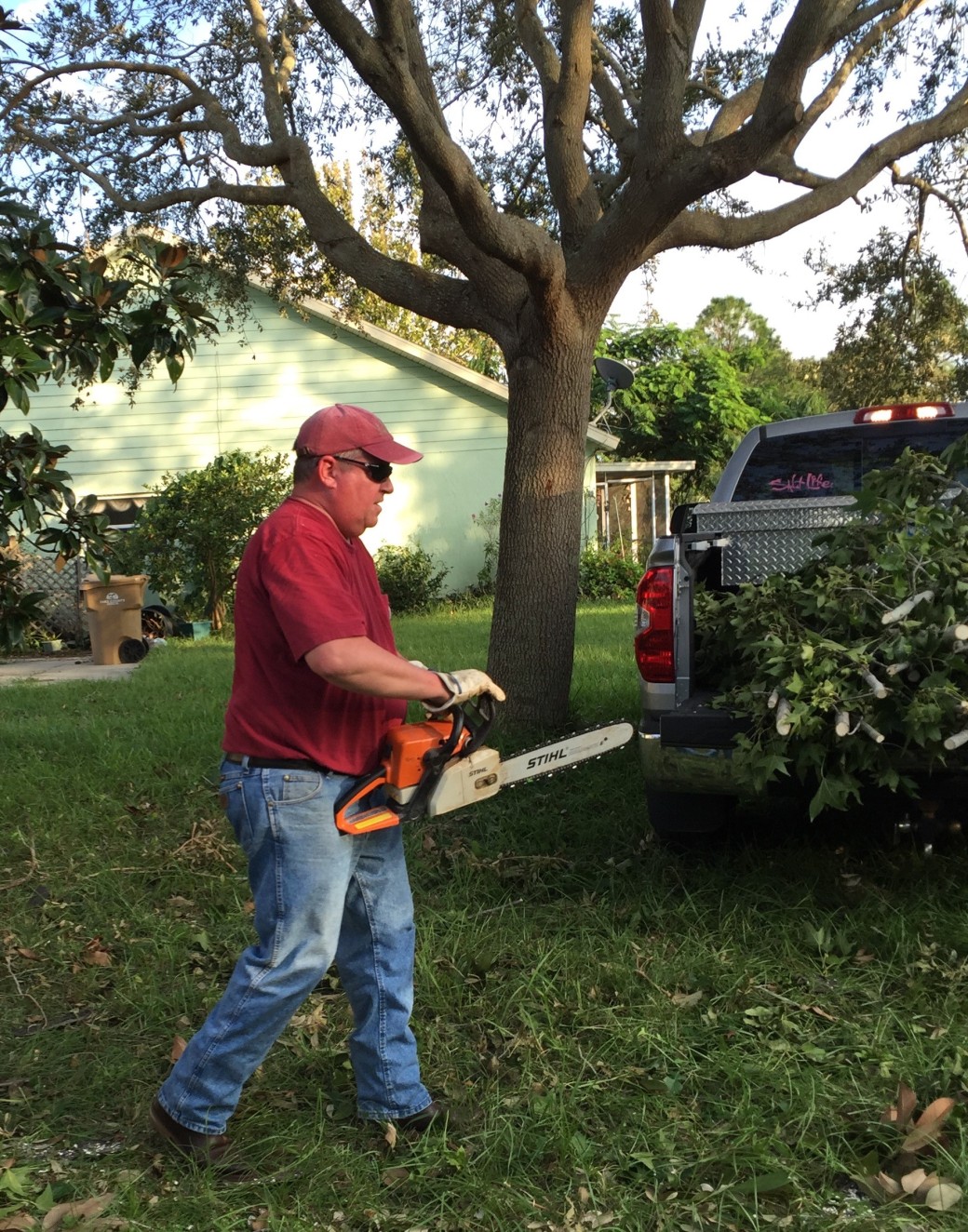 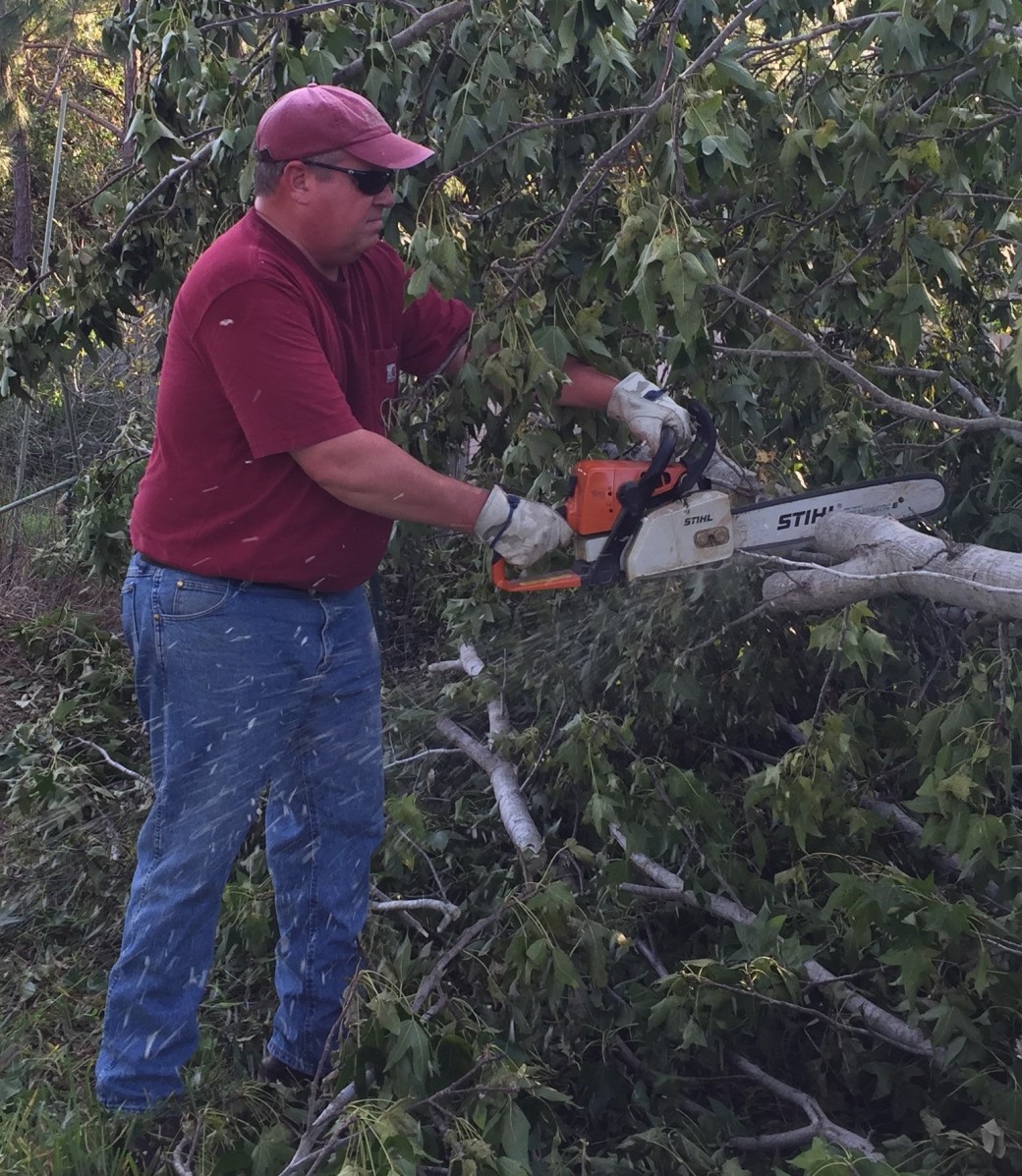