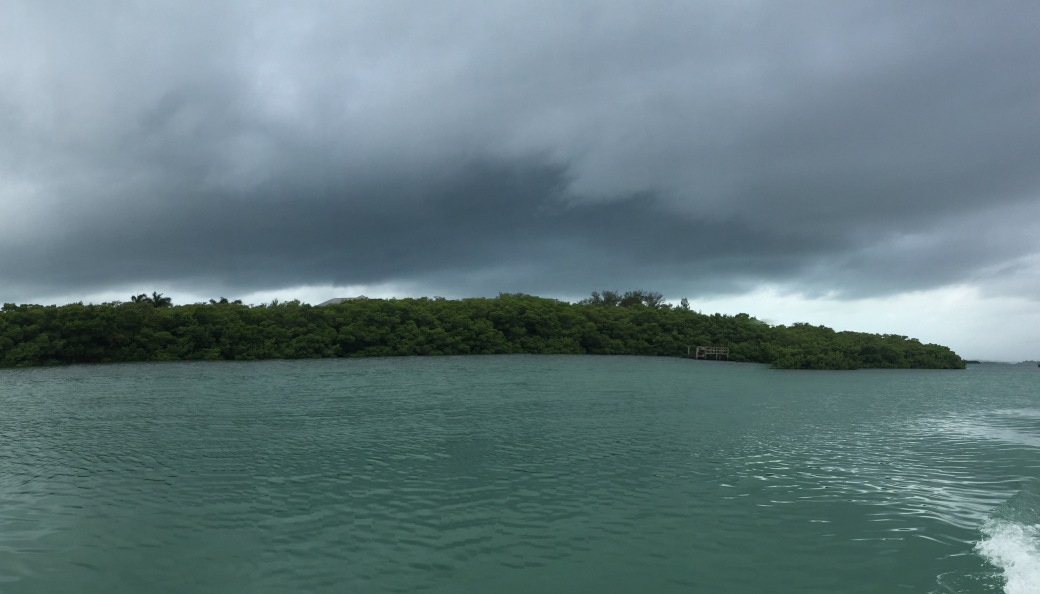 We woke up to cloudy skies and rain around us, but was pretty sure that we could get some fishing in before noon.  Luckily, the place we’re fishing is really close to our rental. 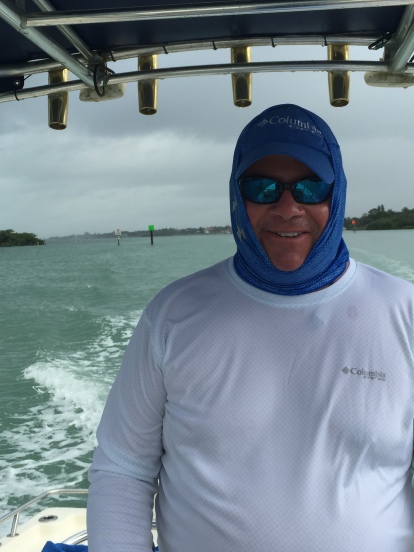 We’re still fishing with shrimp and while we didn’t catch as many as yesterday, we did come back with some keeper fish.  I got a keeper trout (16″) and Eric kept a Jack crevalle.  He read that Andrew Zimmeren had convinced a fishing guide on his travel show to keep one and cook it, saying it was an unappreciated fish and quite tasty.  Eric had to try it for himself.  By the way……….fish selfies don’t really work. 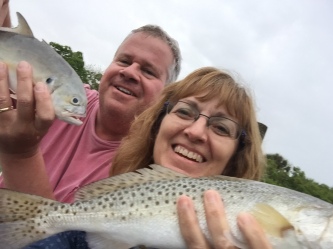 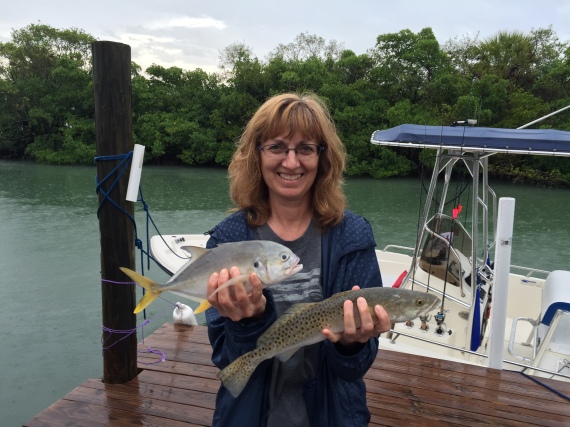 Looking in the background of the photos – above and below – it’s still raining.  We got caught out in the rain just when we were thinking of coming in.  Good thing we’re so close to home! 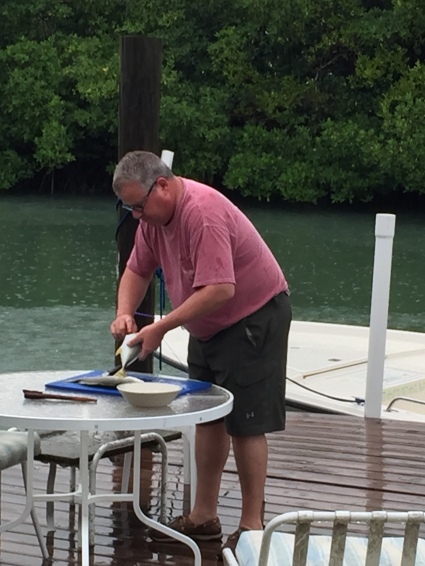 Most of the day it was a nice, soaking rain and we need it.  Florida is in the middle of a drought, much like in 1998.  The really bad weather is north and south of us.  The hailing channel has a small boat advisory for all of the Gulf coast of Florida. 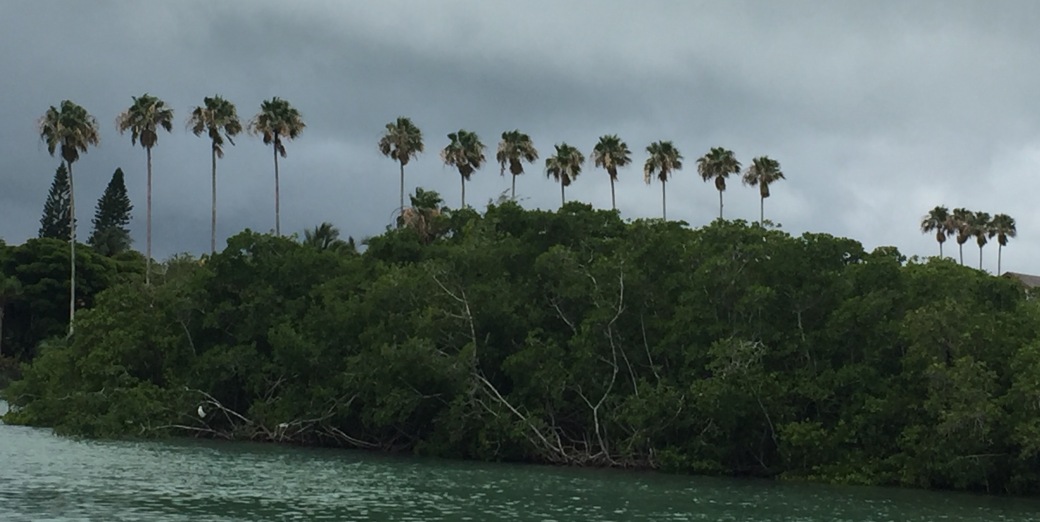 We went out for lunch again. This time Eric found a place that served Chicago-style dogs.  Once there he changed his mind and ordered a beef sandwich topped with green peppers & cheese, but I stuck with my original lunch plans – chili slaw dog.  Eric added an order of cheese fries. 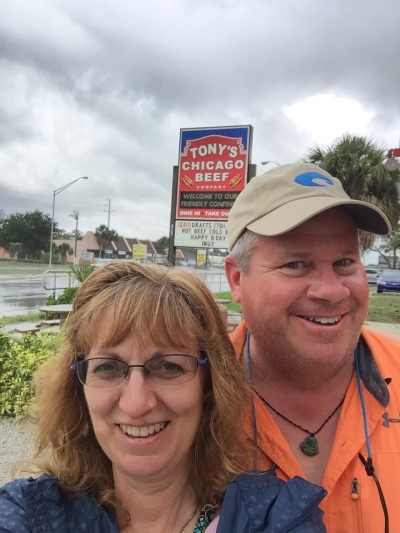 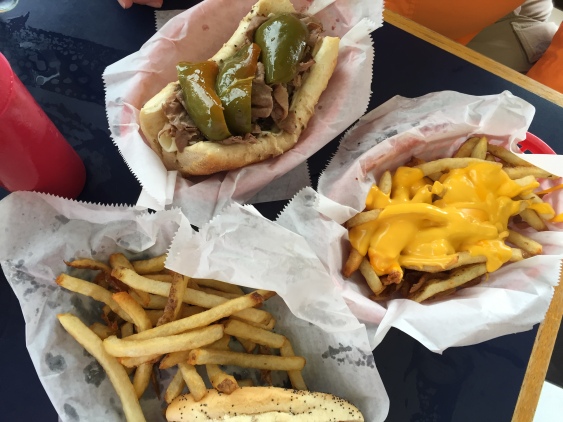 Before heading back we drove through the historic downtown part of Venice.  We saw a ‘Florida Olive Oil’ shop which interested Eric and I went next door to a clothing store.  We both made purchases – ha! 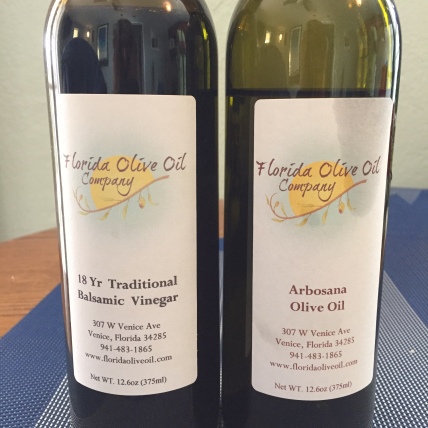 Eric wants to cook the fish on the grill tonight.   The rental has a charcoal grill and Eric pulled it under the porch for some cover to get the fire going and keep himself dry. 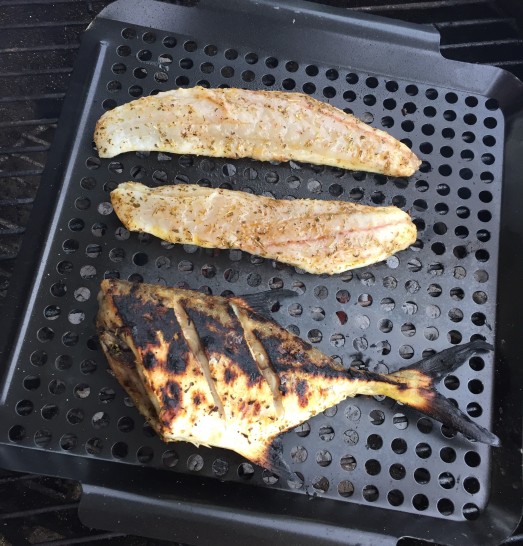 He thought the Jack tasted great.  It’s nothing that I would request to eat again.  The trout fillet was much better.  He also made a nice, refreshing summer salad.  He ate something similar yesterday and this is his version.  It contains cucumbers, tomatoes, onions and the carrots we picked up at the Farmer’s market last Saturday.  It was very tasty and something we will repeat again. 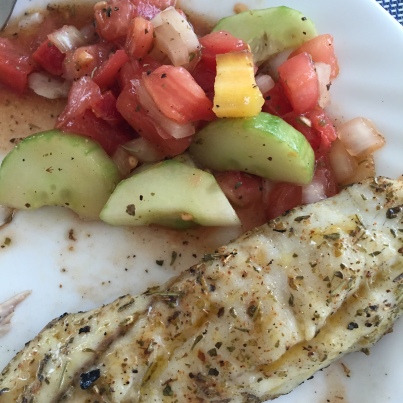 So the next family that moved in yesterday, caught a crab and brought it back with them.  They didn’t want it, so Eric said he would cook it.  He did some research and found out it was a flamed-streaked box crab.  It has a special adaptation that allows it to spurt water out the top of his head – you can just barely see it below.  They’re not usually found and even the internet didn’t have a lot of info.  Seems like it is mostly a southern crab species.  He also read the claws were better than stone crabs to eat – he agreed. 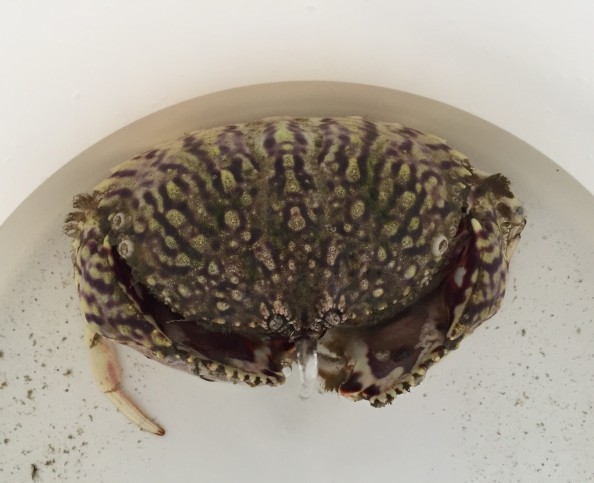 Earlier today, I had flashbacks from Shanghai when my laptop wouldn’t work.  We had a few close lightening strikes and after multiple restarts of this computer, I guessed that we must have a problem with the router.  I couldn’t find it so Eric texted the rental guy.  Our router is in the nearby laundry room, who knew.  After shutting it off, I finally got connected – about 30 minutes later.  AArrgh, it’s frustrating.  Love it when technology works, not so much when it doesn’t.

One thought on “Casey Key – Tuesday”