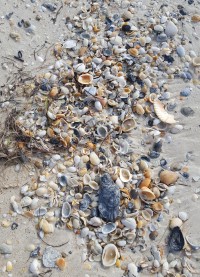 One of our favorite places to visit in Florida is SGI. Eric thinks we have been going there for over 20 years.  The majority of the time we are meeting friends or family.  A few times it has been just the two of us and that’s always a fun trip – a bit different but memorable times.  We rent houses that we could never afford to build but get to pretend for a week at a time.  There’s still nothing on the island, except for a few restaurants that somehow make it and at least one grocery store.  That used to be a small market but then a huge monstrosity was built and ruined (in my opinion) the landscape.  Recently the corner gas station has become a Piggly Wiggly Express and we go there first for things we need.  This trip we’re meeting the Gephardts for a week of fun and fishing.

Our method of fishing has changed significantly with the purchase of our boat.  We never use our kayaks which was my first exposure to fishing.  I miss the physical aspect of the kayak but our horizons have definitely expanded when you have boat power.  So yes, on top of the truck cab is our kayaks, hopefully we will use them on this trip. 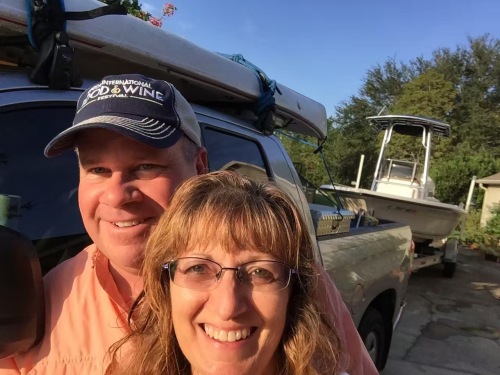 The rental house is Saturday to Saturday.  It’s called Bay Haven and has a dock for the boat and access from the bay.  It’s a little older than the house we typically rent, but it has a swimming pool and that’s important for the kids, Warner & Audrey.

Upon arrival, everything is brought inside with  groceries being carried up to the second floor with the kitchen and our packed clothes in the first floor bedroom.  Dennis and the family arrives within an hour. One of Ansley’s sister is joining us for a few days.  The boat is launched at a fairly new boat ramp just as you drive onto the island.  Eric drives the boat to our house and I bring back the trailer.  The first night’s dinner is usually pasta since there’s not much time for actual fishing the day we arrive.  However, the next morning is a different story.  Once all the fishing rods, sun protection, life vests  and other assorted accoutrements are put on the boat, we head out. 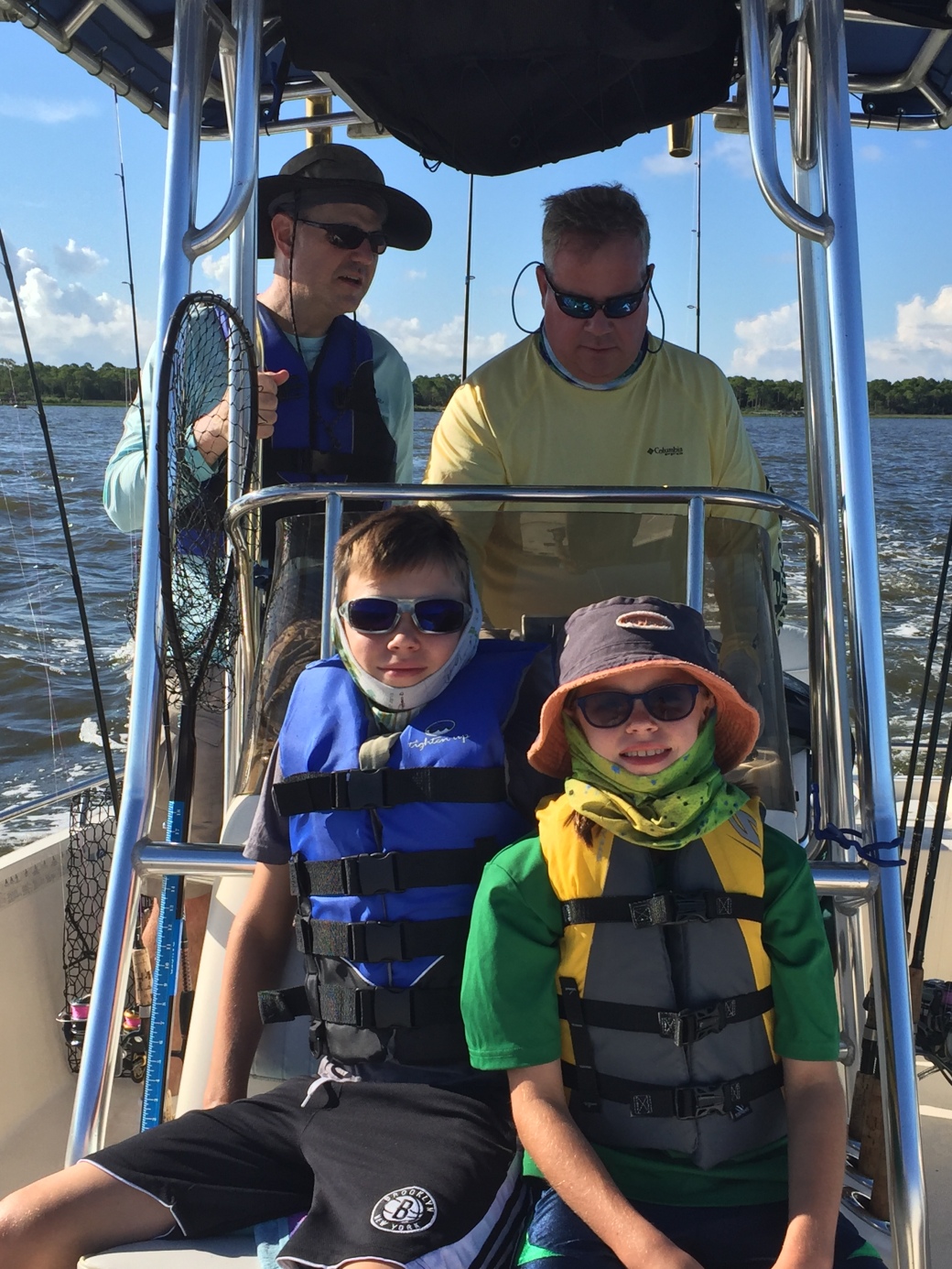 The first order of business is to drop two pin fish traps into the bay.  After a few days of trial and error, we found some good locations to trap bait fish and not catfish.  It was always a surprise what we would find in the trap.  For the pin fish traps, we put a small, barely noticeable float on the trap so others couldn’t find it…and we occasionally had trouble.  Even though Eric marked it with his GPS (so he says) tides or storms moved the trap.  One day one trap was never found.  However by the end of the week both were located. 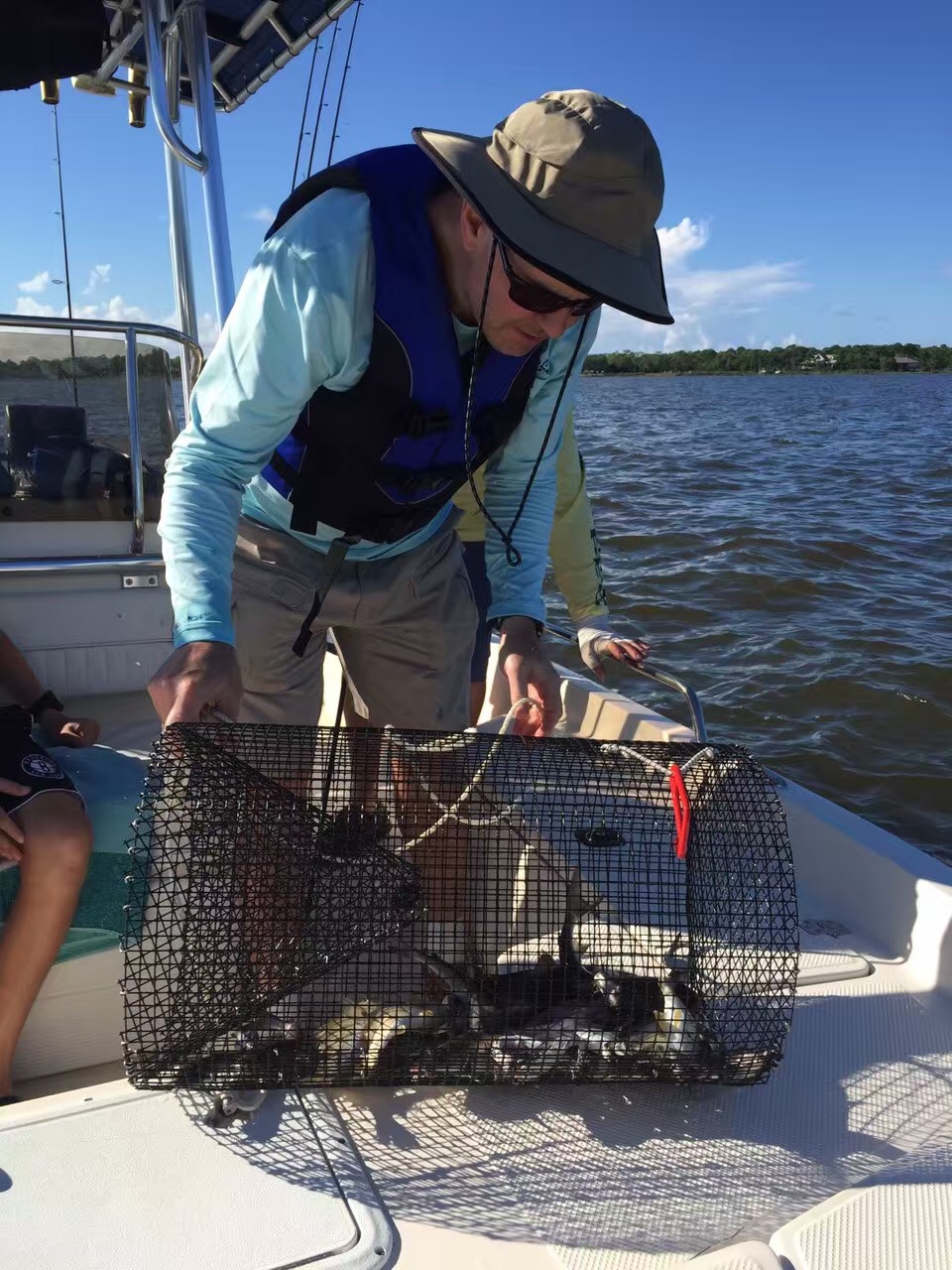 One morning we caught a plethora of small jelly fish and it was a slimy mess.  Some catfish always ended up in the trap and were throw back into the bay.  Most times we did get some small baitfish we could use for fishing.  We also had two crab traps were placed in our canal off of the bay.  Of course if you’re going to have a trap, you need a float that identifies the owner.  Eric asked Audrey to write on our floats and you can see what is popular these days. 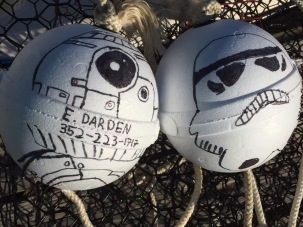 Most days also included a trip to the beach.  We were able to walk from our place and find a path for beach acces.  Some times fishing gear was brought along, but was never a huge success.  Couldn’t pass up a chance to shoot a selfie with the storm clouds in the background. 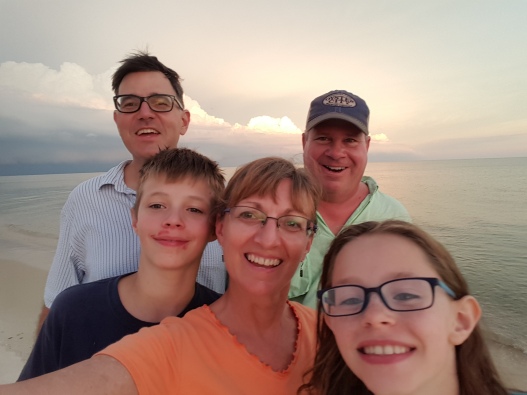 Fishing was good.  Most days we caught enough for our dinner.  Lunch was usually an individual affair either going into Apalach or fixing something at home.

Both kids enjoyed the fishing with Audrey becoming quite competitive and focused.  Warner enjoyed being on the water and fishing when everyone else was catching things. 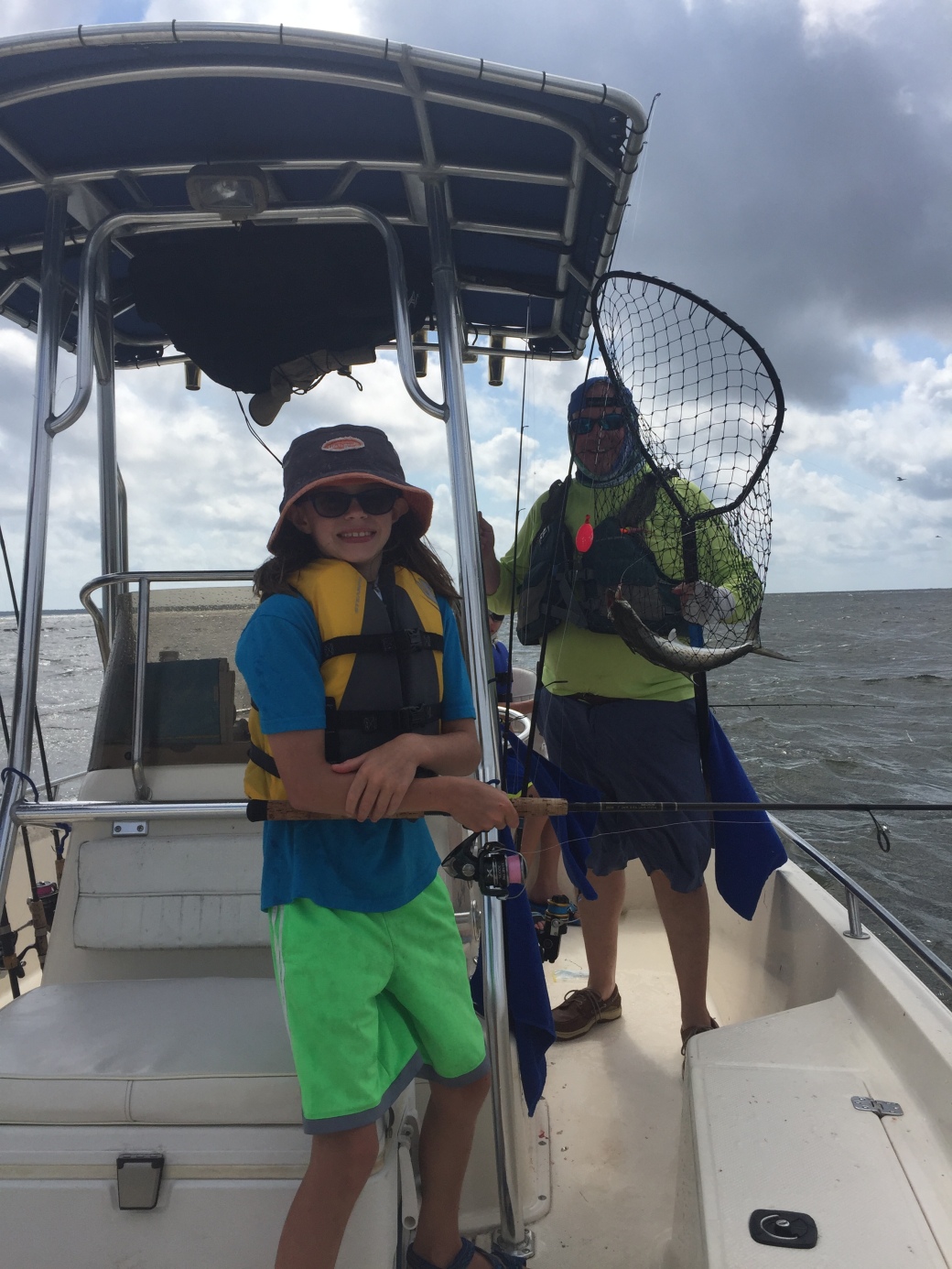 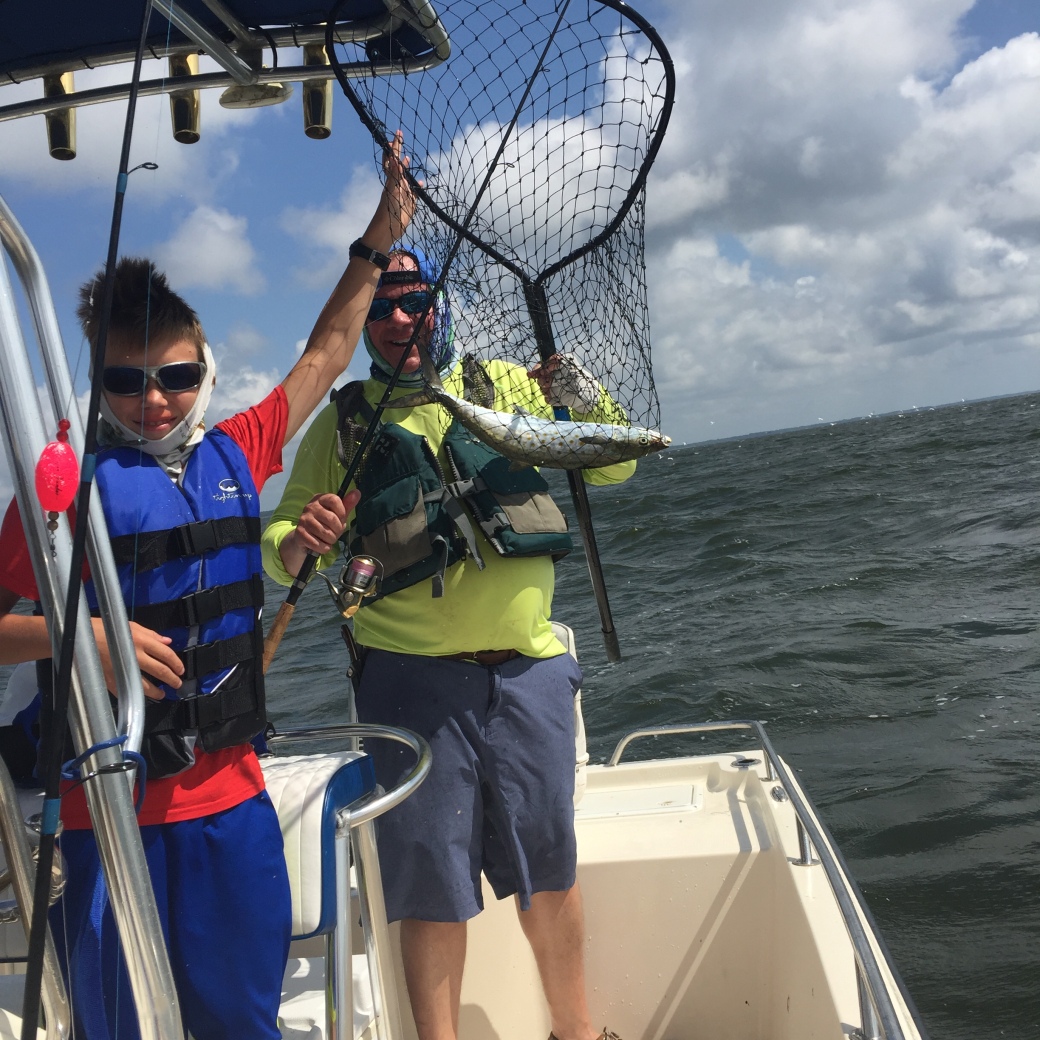 This trip had  several experiences of ‘running and gunning’.  Pods of mackeral fish were in the bay and when we saw diving birds we gunned the boat, cast into the fray and held on!  No pictures of the action since everyone was busy catching the fish.  We got one  photo of macks once we got back to the rental. 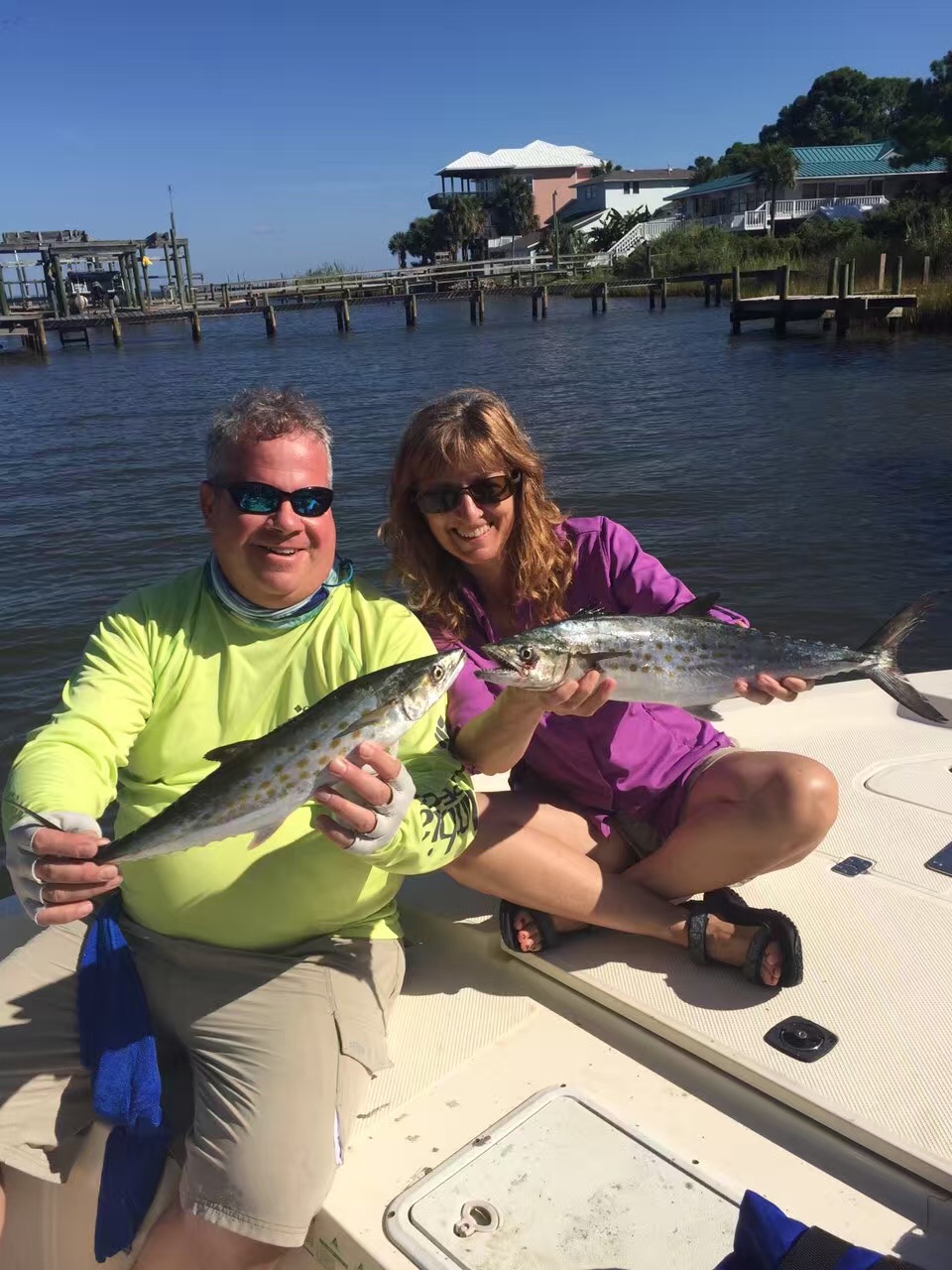 The fish was so fresh, one night we had sushi bowls with the fresh mackerel. 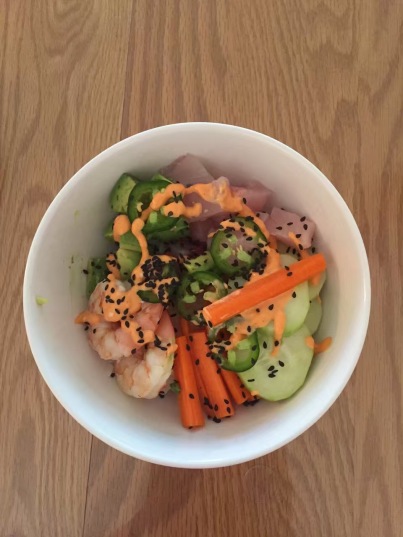 Boy, our culinary experiences are a big departure from the first decade of cooking.  Those were fairly traditional meals with fried seafood, steaks and occasionally chicken.  Who would have guessed that I would be eating sushi and now able to use chopsticks!

It was Dennis that introduced us to SGI, many years ago staying at Stargazer.  We have had multiple trips to the island, at times making 3 trips in one year.  It is a special place.  Both of our families have made at least one trip to join us on the island. 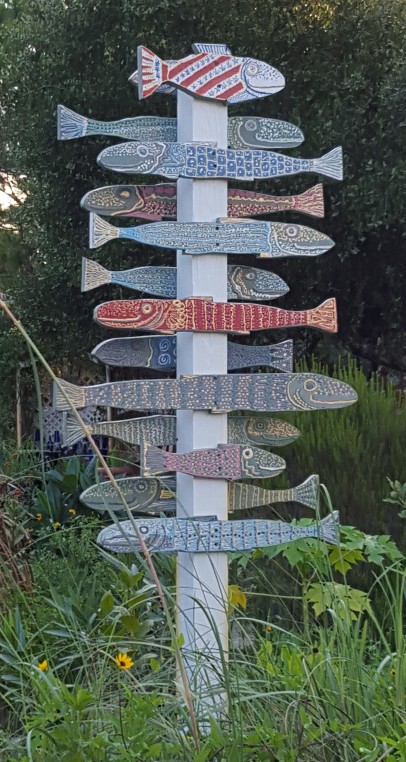 Also who could have guessed that two friends growing up in North Little Rock, AR would continue their friendship throughout the years and walk along the beach in Florida. 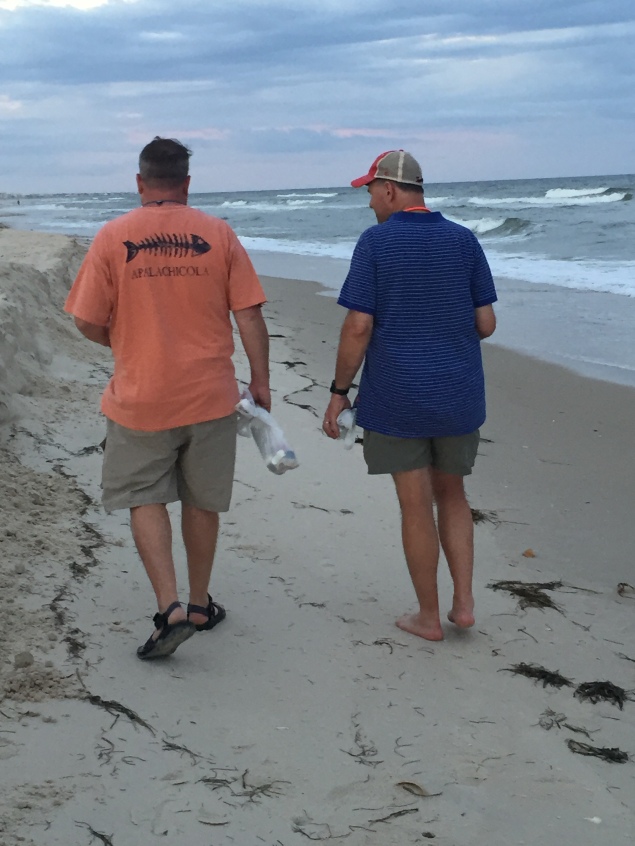 Always have a tradition of everyone going to the beach on our last evening and taking a beach photo.  This year was no different. 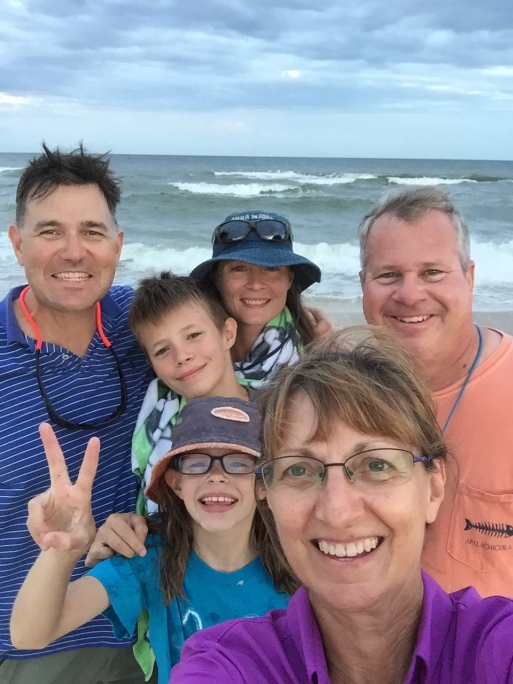 Can’t wait until our next trip!