Road trip!  Seems like once a year, we make the drive to the gulf coast with Tarpon Springs ultimately being our destination. It’s no short drive. Yikes! 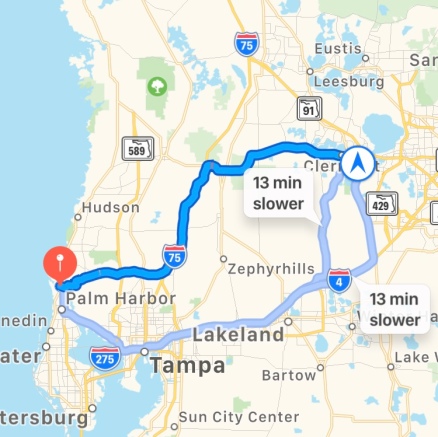 So, why go?  It has kitsch, water, Greek food and sponges!

Let’s start with the kitsch.  One way to look at the historic street is ‘tourist trap’.  Another way is kitsch = defined as art, object or design considered to be in poor taste because of excessive garishness or sentimentality, but sometimes appreciated in an ironic or knowing way.

Another to look at the historic street is ‘old Florida before Disney & the internet’. 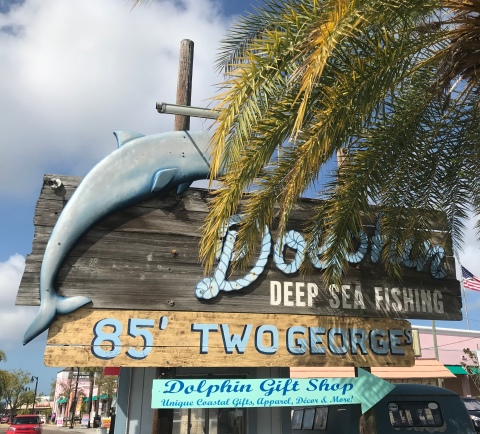 Since the historic street is along the Anclote river, there are numerous opportunities for fishing expeditions, boat rides and dolphin tours.  And yes, there are tons of souvenir shops, some tackier than others.    As long as you go on with those expectations, you won’t be surprised or disappointed. 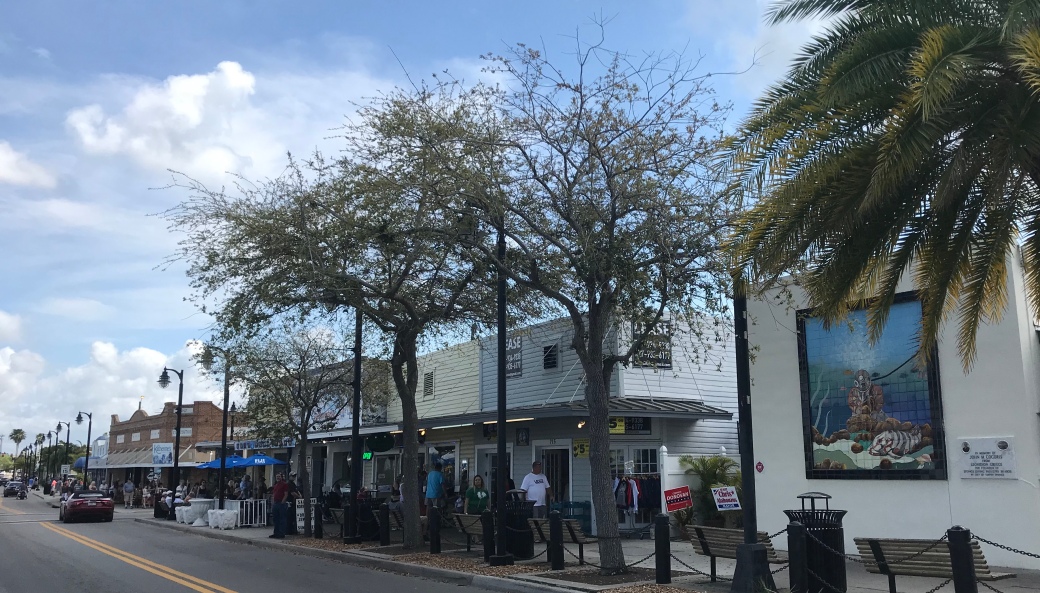 No matter where you walk, you’re never far from the river and boat traffic. 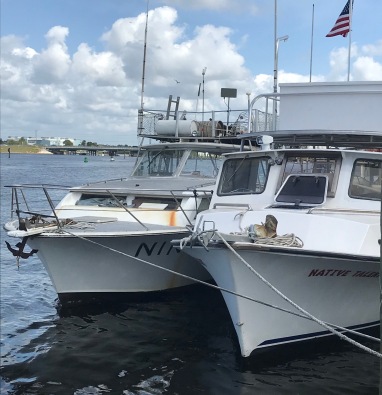 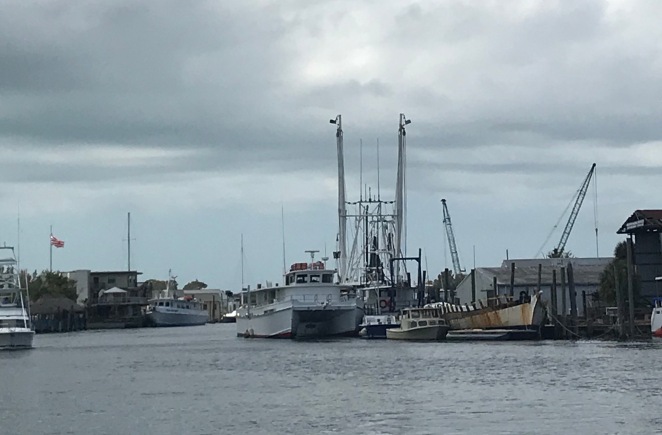 Let’s talk next about the Greek element.  With the last census, Tarpon Springs had the highest percentage of Greek Americans of any city in the US. 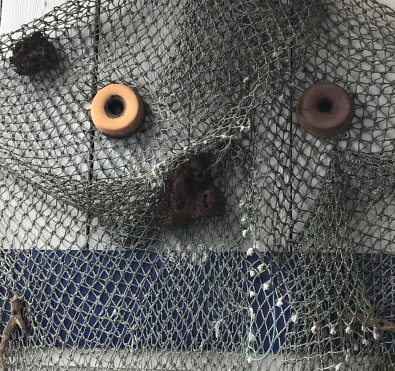 I referenced food in the beginning.  There are numerous Greek restaurants along the street and this trip we stopped at a previously untried place – Hellas. 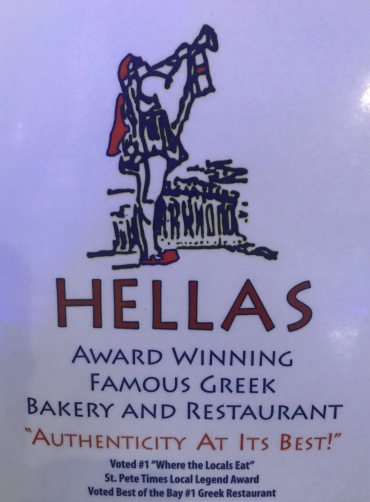 We started with the flaming cheese…………….yelling  ‘Oom-pah’ when it was lit. 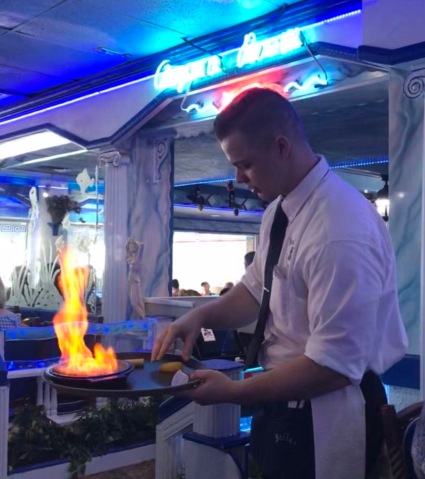 It’s very tasty, if a little dramatic, but everyone in the restaurant was ordering it.  At first I thought it was too salty, but when paired with the hummas we ordered, it was perfect. 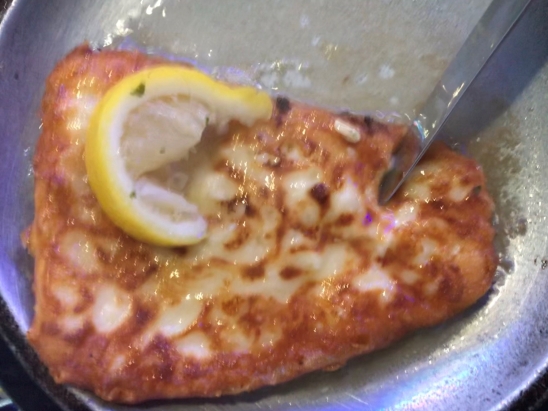 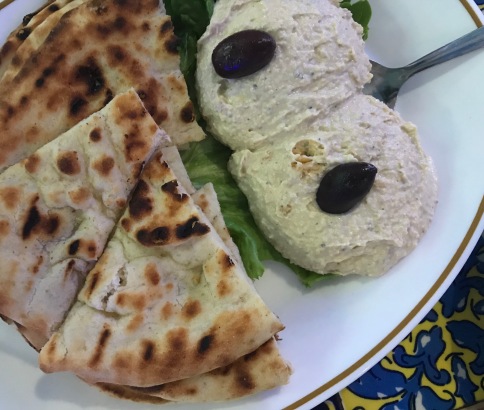 With all of the extras we ordered (and the free bread) coming before our meal, I settled for a (Greek – of course) salad.  While you can’t see it I ordered the ‘traditional’ Greek serving and underneath all of the lettuce lies potato salad – very tasty, and filling. 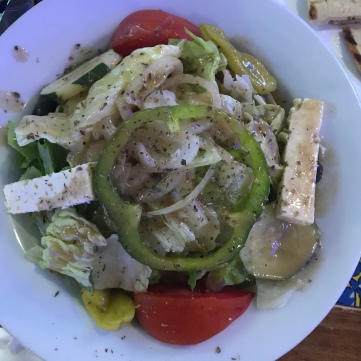 Eric ordered the stuffed grape leaves, which was accompanied by various starch sides (sorry – no photo of the starches, can’t even remember what they were). 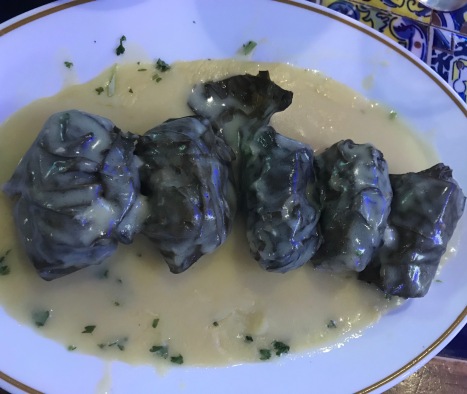 My plan was to save room for baklava for dessert and next door to the restaurant is their bakery – it had WAY too many choices.  My last photo has the baklava on the bottom shelf.

I was able to catch a quick shot of my aunt and mother-in-law in front of the restaurant.  Hellas had inside and outside eating and their dining rooms seem to go on forever – holy cow, they can seat a lot of people! 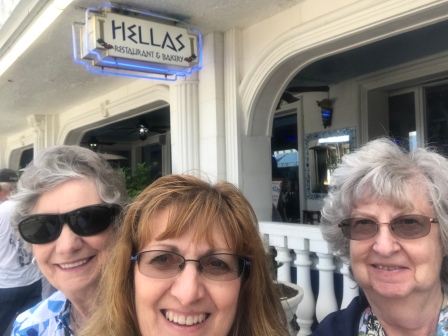 And finally we get to the sponges – the reason we made the journey.  They can be found naturally in the Gulf of Mexico.  I found this sign, so why re-type! 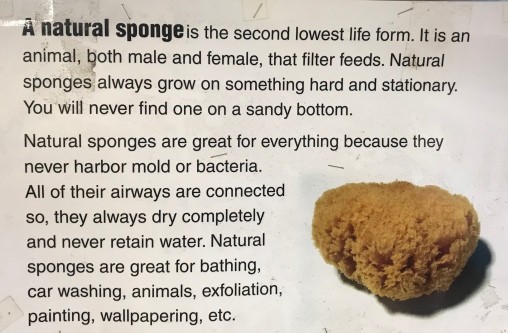 Sponges are stored in bins and a pricing & sizing guide gives you a general idea what you’re paying.  The natural sponges don’t come cheap – just saying. 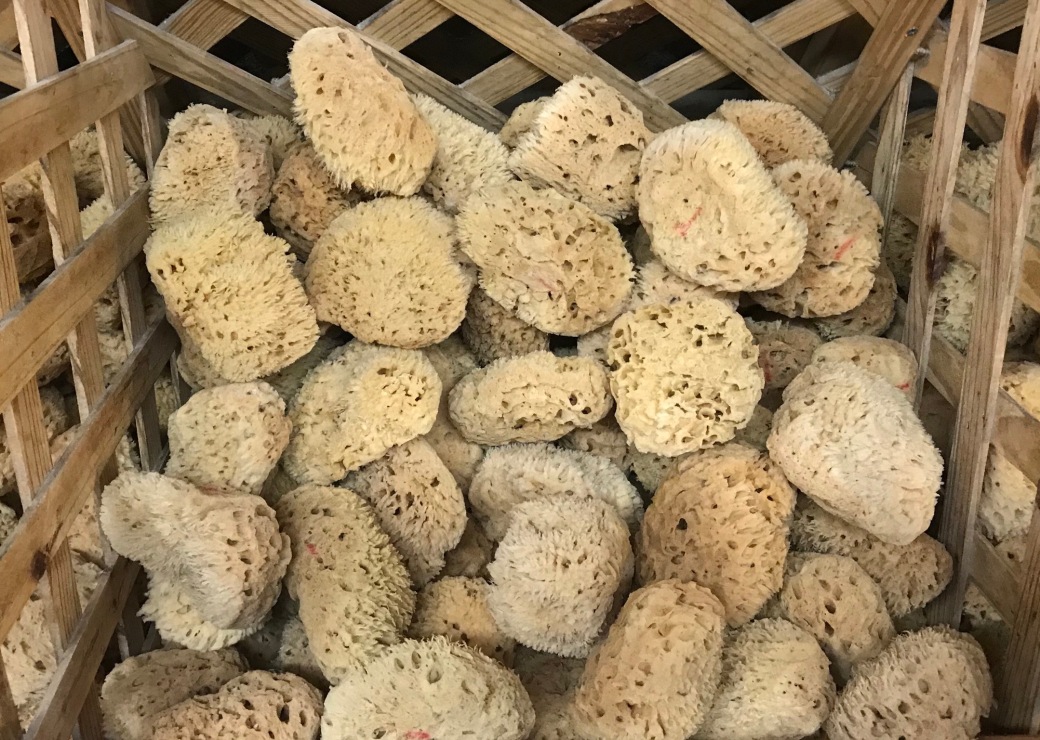 We did learn that in 1947 a Red Tide Algae bloom wiped out the sponge fields in the Gulf and not until the 1980s did it become an active business again.  We saw an old film that explained the process of gathering the sponges and the processes involved before they have a viable product.  This place was not short on kitsch. 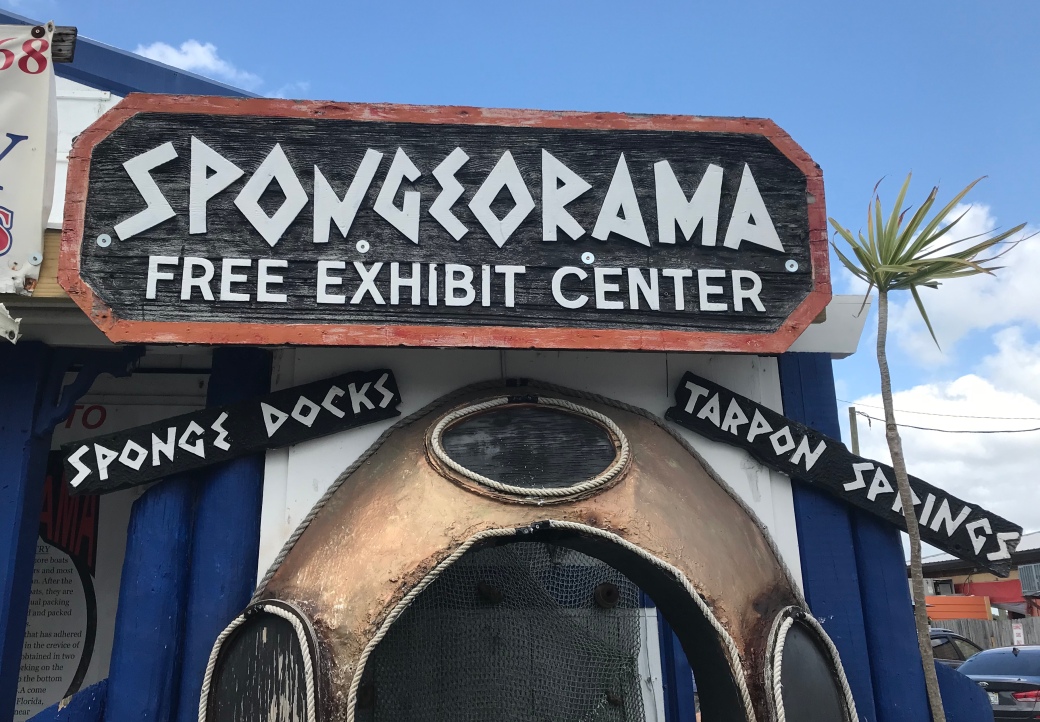 Driving over I found what seemed like a pretty cool heritage museum focused on the Sponge Industry.  Alas, it wasn’t open on Sunday.  Maybe we can visit on our next trip.  🙂

My last bit of research for Tarpon Springs indicates that on January 6, this is one of the more elaborate religious Epiphany celebrations, hosted by the Greek Orthodox Church.  This also includes a blessing of the water and boats.  One of the last events  of the Greek celebration entails youths (boys, 16-18 years old) dive into the water when the priest drops a wooden golden cross.  Whoever recovers the cross is blessed for the coming year.  Hmmm, do girls get to join?  Just curious.