A part of our European trip was spent in separate locations.  I most definitely did not want to go to Munich with all of the crowds – no thank you.  Many years ago we were in Munich the day before Oktoberfest – aacckkk!  Eric loved it, I did not – too many people, too loud and too much noise.   We looked at a map of Europe, discussed several possibilities (Prague was my first choice – too far away  😦 ) needed an airport nearby and ultimately  selected Freiburg.  I’m glad we did. Karen and I really enjoyed our time in that city and the boys enjoyed their time in Munich  Here’s their story, written by my husband.   Ginny

Rich and I sent the girls on their own adventure and we finally headed to Munich for Oktoberfest.  Truth be known, this was the genesis for our entire 2 week trip.

The trip from our apartment to the Venice airport was a little stressful, but once we arrived things went smoothly.  We saw the girls off then had  hours to kill, which was done in the Priority Lounge.  I did not take photos of the lounge but it was the largest and nicest yet.  I did manage to get a photo of the girls flight to Freberg taking off. 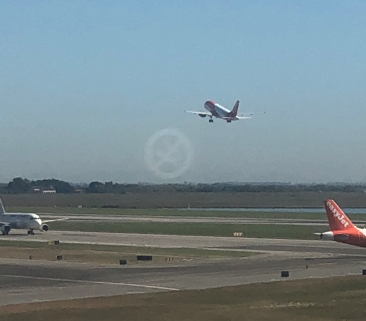 Our flight from Venice to Munich was only an hour on Air Dolomiti, which is actually owned by Lufthansa.  It was an uneventful flight.  As was the train trip from the Airport to the Munich City Center and our home for the next 3 nights, Hotel Concorde. 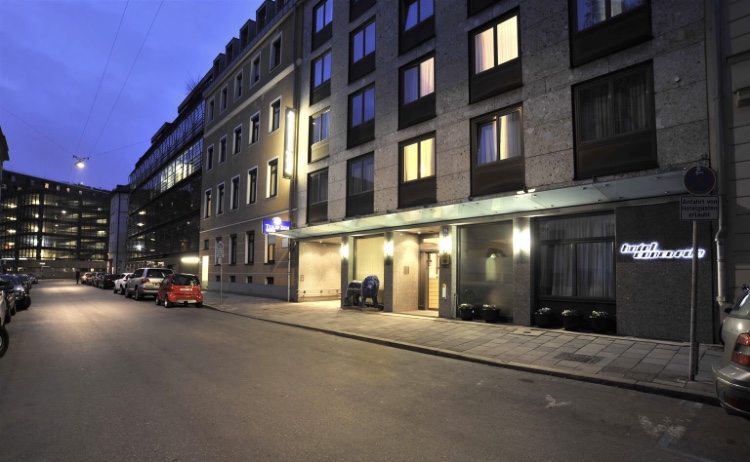 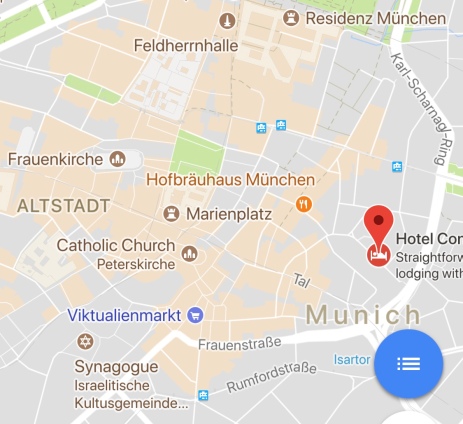 The hotel was nice and had a very nice breakfast.  The best part was the location.  It was 2 blocks from this famous location! 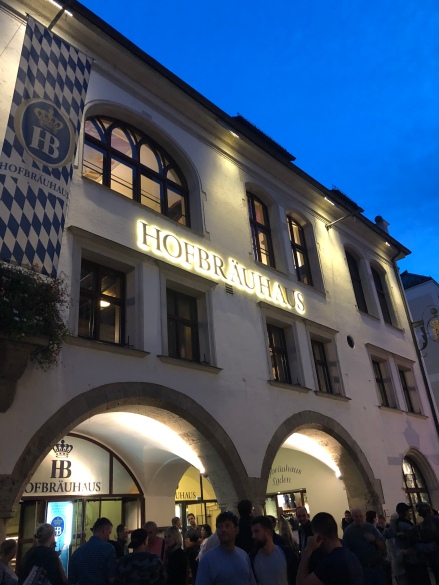 We quickly settled into the hotel and headed out for our dinner reservations at Ayinger  which is right across the courtyard from HofBrauhaus. 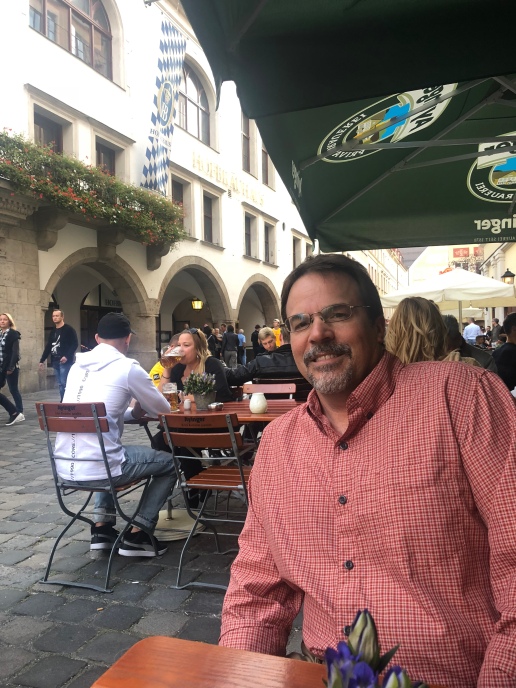 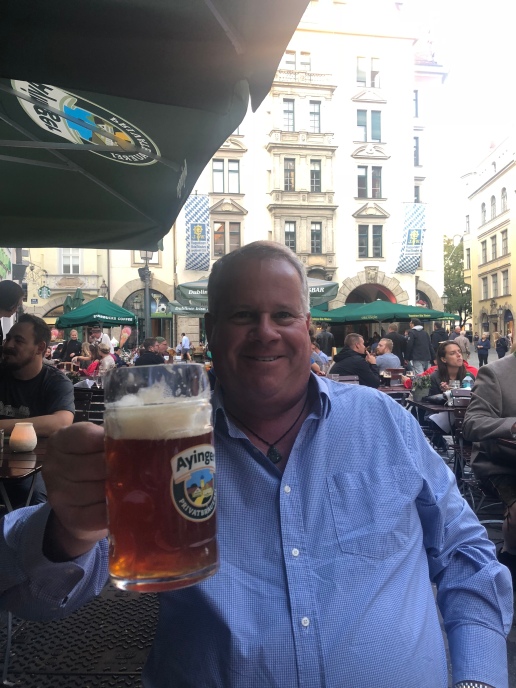 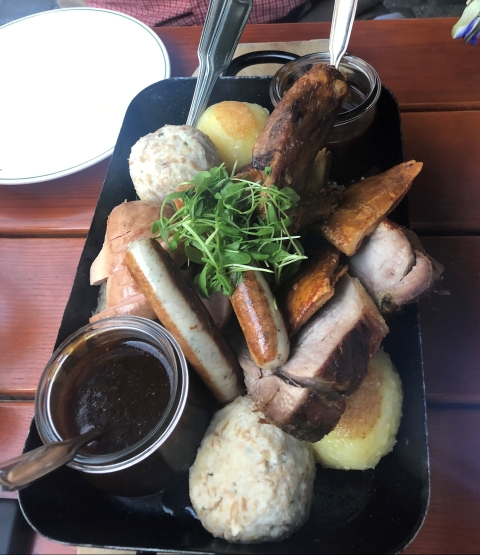 After dinner we crossed the courtyard and finished up the night in the Hofbrauhaus beer garden. 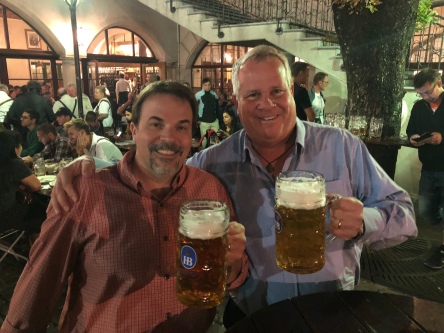 We quickly made a new friend.  Not surprising since neither Rich nor I have ever met a stranger.  Santosh asked if he could share our highboy and of course we obliged. We quickly got to know him and his story.  He lives in southern Sweden and came down alone just to experience Oktoberfest.  His wife and 6-year-old boy live in India, where he is originally from.  Not surprising, he is in IT while his wife is a lawyer. 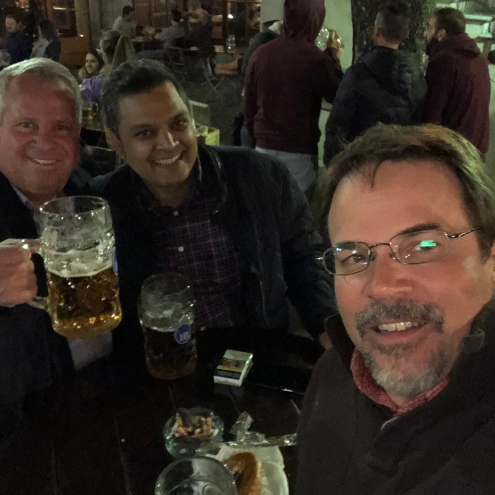 We were up fairly early Saturday  morning and after a nice breakfast at the hotel we were to see some of the sights of Munich. 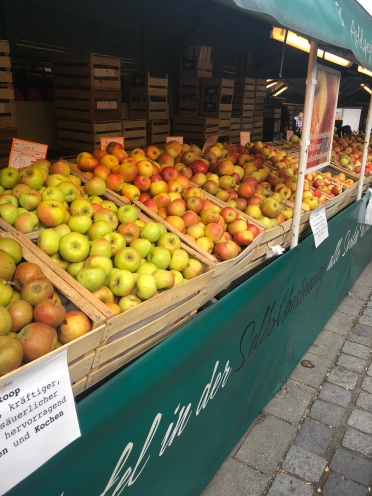 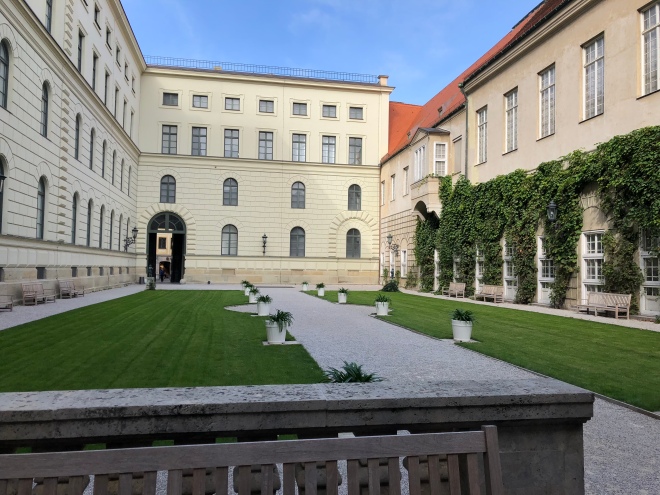 Ginny and I had been here before but it was a first for Rich.  We hit the daily market, the Rathaus with the Glockenspiels as well as the Duke’s residence. 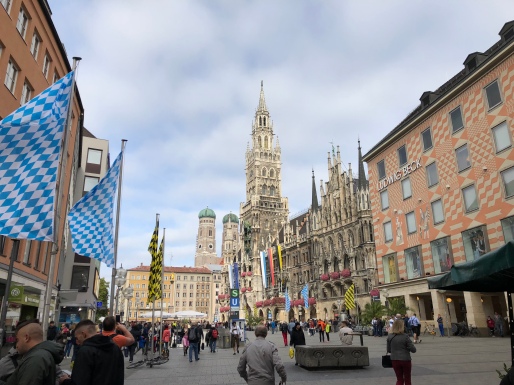 Next we wandered thru the Residence Gardens and right into the Englisher Gardens, one of the largest municipal parks in Europe. 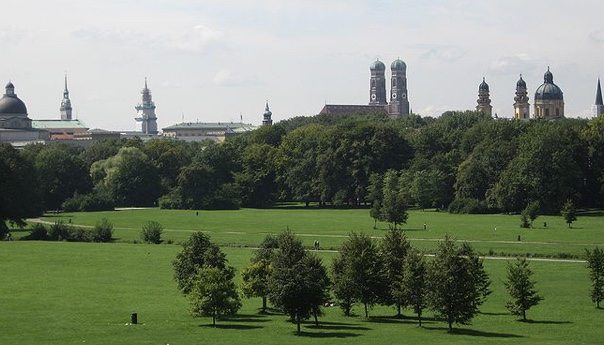 We ended up at the famous Chinese Tower. 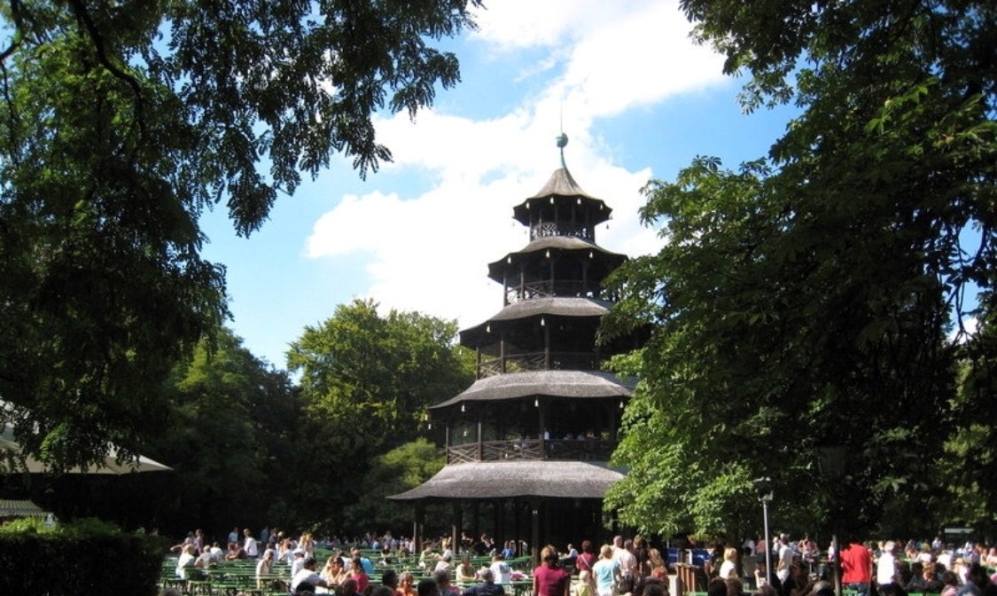 And how lucky!  It has its own beer garden!  The second largest in Munich.  We enjoyed typical German food then was joined by some boys from Denmark and Germany. We visited with them for a couple of hours.  And had a few more beers. 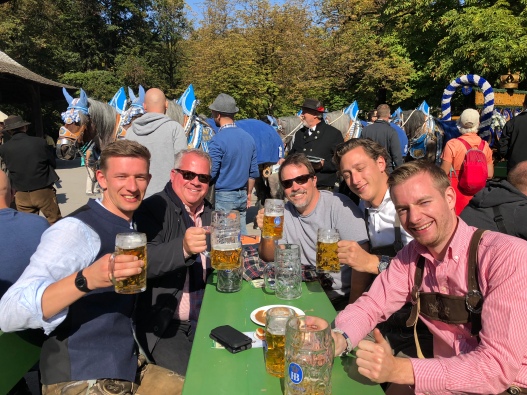 After wandering back to  our hotel room we got ready for our dinner reservations.  We are dining at Augustiner Keller which is hard to get into during Oktoberfest.  I made the reservations in June.  It was a great meal with way too much food.  We each had pork knuckle (schweinshaxe) and half a duck with all of the fixins. Rich cleaned the plate.  Me, not so much. 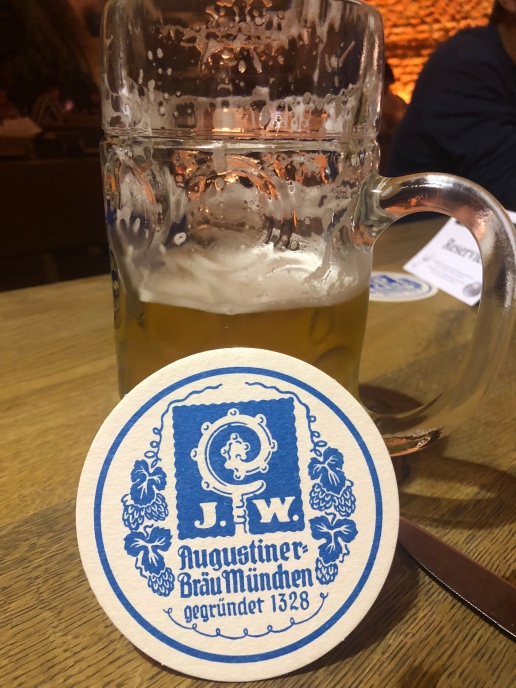 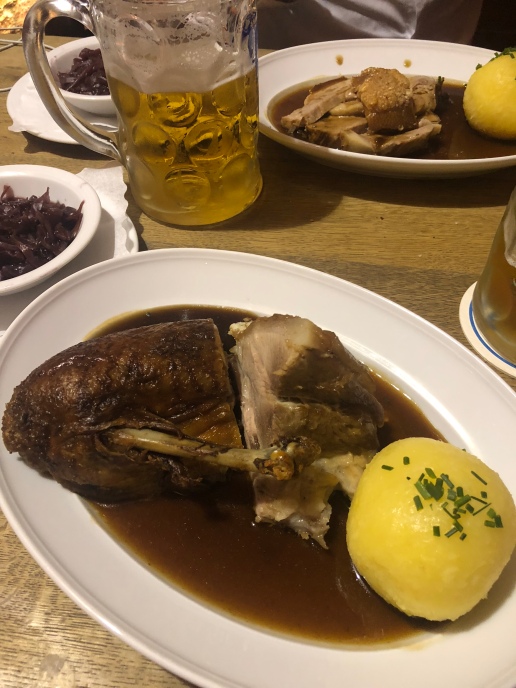 I am afraid that Karen would have hated the place.  It was a good 20 feet underground and definitely had a cramped feel to it.  These are the cellars where Augustiner used to age their beer. 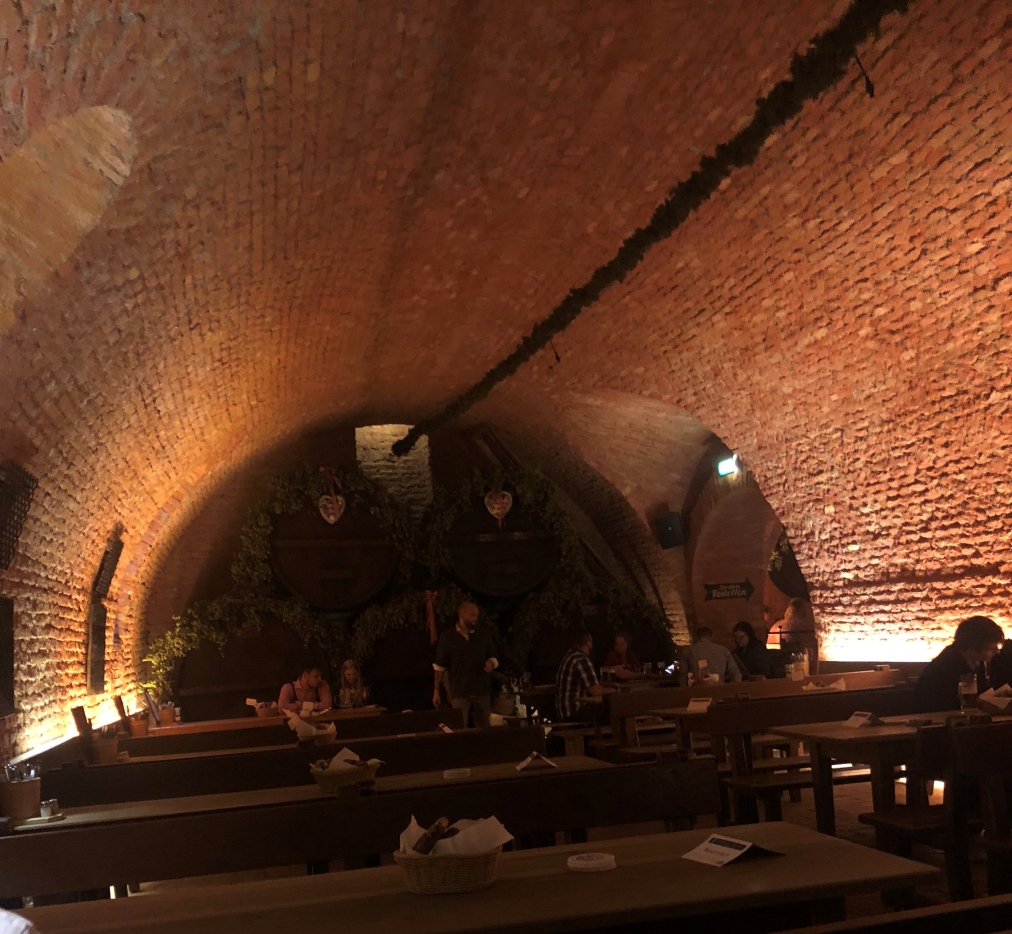 We were again joined by our friend from the night before, Santosh!  I had made the reservation for 3 so we had an extra spot.  Santosh has plans to bring his family Disney next year and if he does Rich will come down for a Oktoberfest reunion! 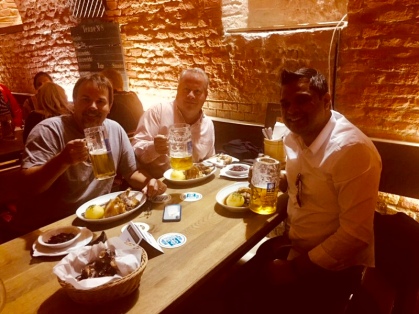 We made a stop at Der Pschorr Hall where we all had one. 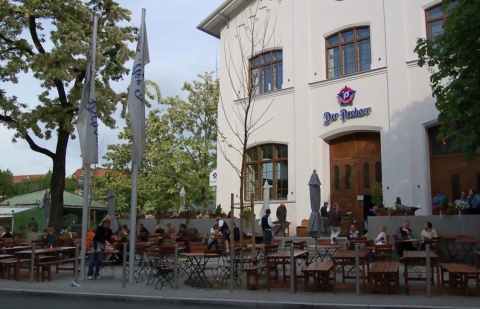 It was getting really, really cold, so we made plans to go back to the hotel, get our jackets, and then meet Santosh back at the Hofbrahaus. 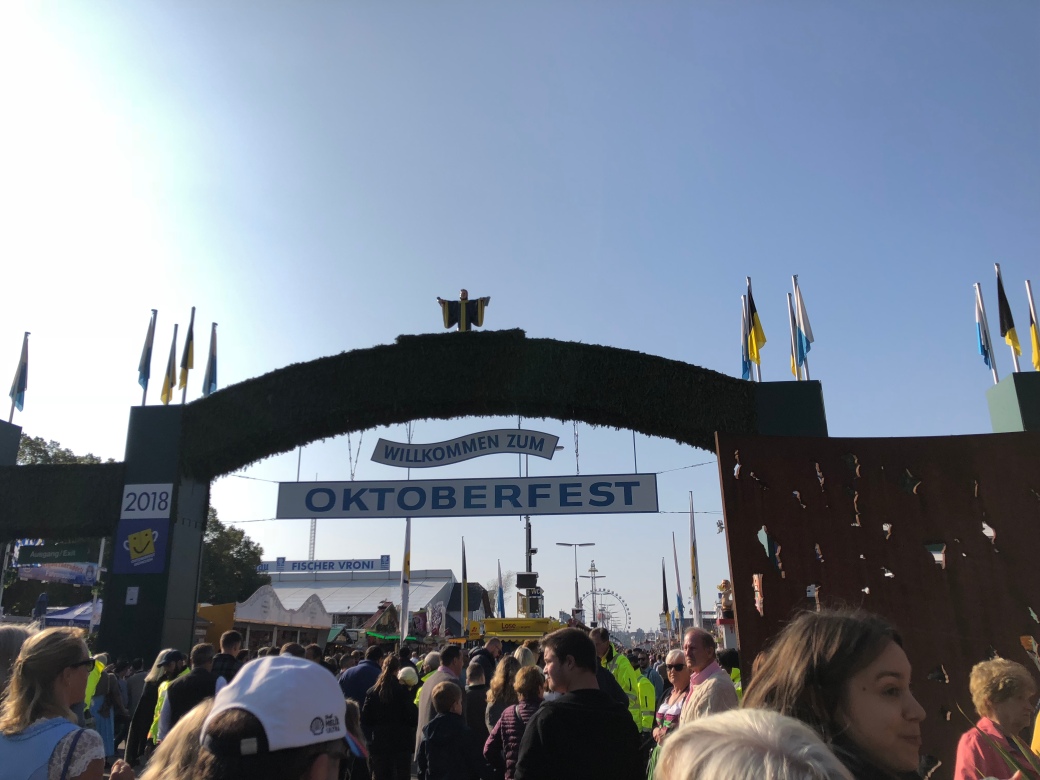 Both Rich and I had read that getting a seat in a Oktoberfest tent is very difficult on weekend days and the only way is to get there early.  So we arrived around 10am or so.  We passed several tents that had lines then we saw Ochenbraterei, commonly called the Spaten tent.  We entered and made our way to an empty table.  We were intercepted by a waiter who had us sit with 7 other folks, mostly from North America.  Regardless, we had done it!  We had a seat in a tent at Oktoberfest.  Our goal for over a year. You can see how happy we are. 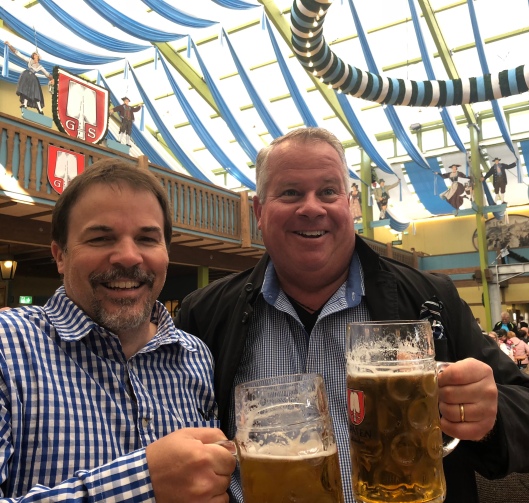 The tents can be almost overwhelming.  The Spaten tent we were in holds most 6000 people, has a huge kitchen with hundreds of wait staff, a band, sound system and giant bathrooms which are necessary with 6000 people drinking copious amounts of beer. 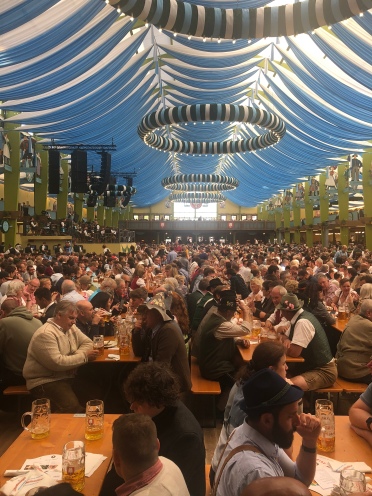 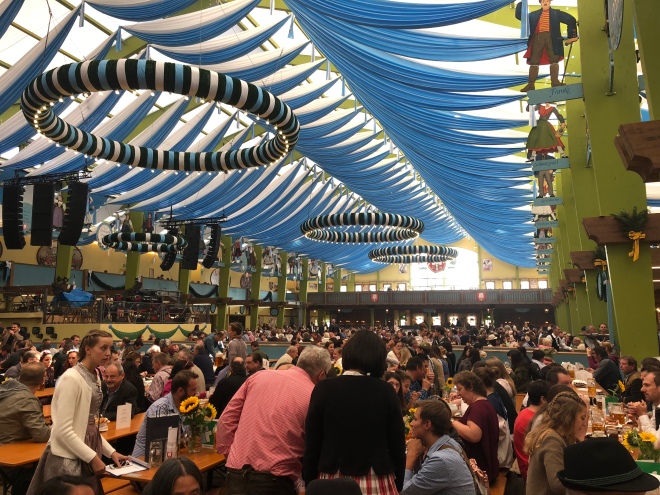 Our first order of business was eating so we ordered more roast meat.  I had suckling pig and Rich had duck.  Sorry no photos, but look at the previous photos above.  It looked the same.  We were soon joined by a German (Bavarian specifically) who was friends of one of the Americans at our table.  Matthius was his name and he was dressed in true Bavarian fashion.  Very sharp and very expensive.  All the gear he is wearing would push $1000.  Which is why Rich was not sporting the same fashion! 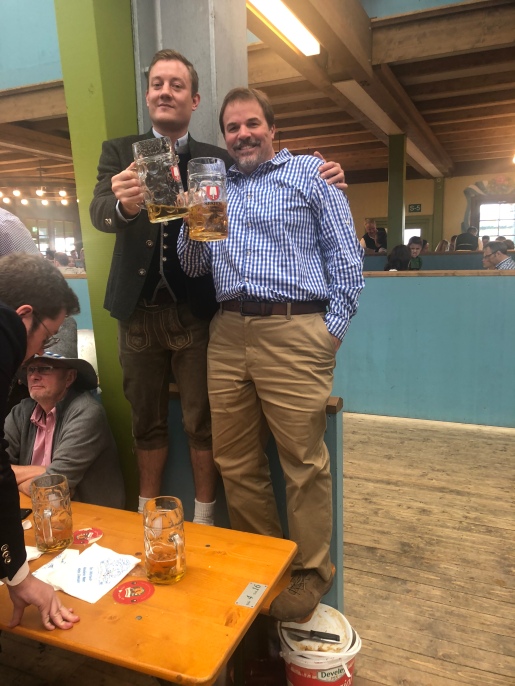 Matthias and Rich. Yes standing on a bench.  At a certain time that was a mystery to us but Matthias knew, everyone stood on the benches. Eventually half of the beer hall was bench standing.  That I or anyone else manages to stand on those narrow benches after consuming so much beer is surprising. 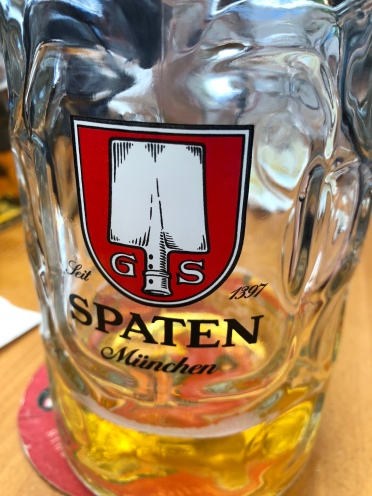 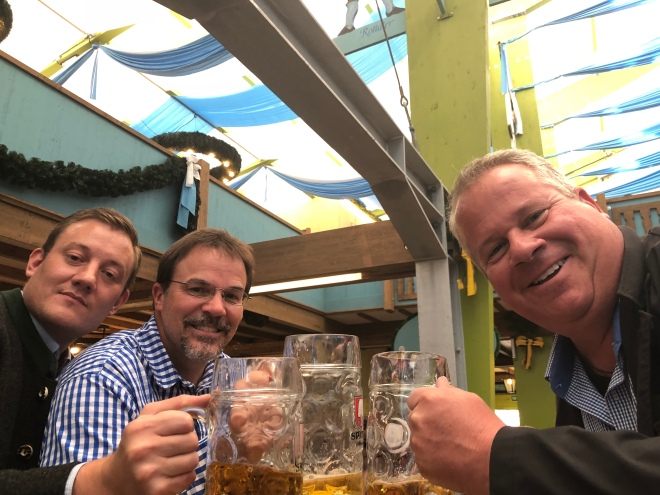 What kind of beer am I drinking?  I went to Oktoberfest expecting to be drinking lots of Marzen, the beer called Oktoberfest in America.  It is slightly dark and very malty.  Also normally has over 6% alcohol.  But that is not what I was drinking at all.  No one was drinking it.

What we were drinking was a Munich Helles, the original one. I found that I could still order a Marzen or strong beer but that was not normally served.  I had a great one at Ayinger and Hofbrauhaus.  Apparently about 150 years ago Marzen became the most popular beer replacing the dark beer it started with.  In the 1970s Paulaner Brewery began the move away from Marzen with a new style of beer called Festbier and everyone followed to the point that by the 1990s it was the only beer being served.  Festbier is more malty than a Pilsner but less malty and heavy as a Marzen.  With significantly less alcohol.  Another thing about the beers at Oktoberfest is that they  not artificially carbonated. Which means not nearly as fizzy (or filling) as many other beers.  The perfect beer to drink in quantity but potentially dangerous.

Last order of business in Munich was to pick up our rental car and head to Frieberg to meet up with the girls.  We picked up this beauty, set the GPS to Frieberg and was on our way. 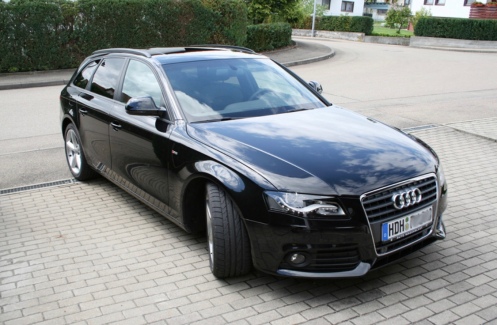 Oktoberfest is something  every beer lover should experience once in their life.  Not sure I need to do it again!  But if the opportunity presented itself, I could.