We had a small group converging at the Darden household to head out for a few days of scalloping and possibly fishing.  They were rushing me in the morning so my photo starting our journey was not one of my best. 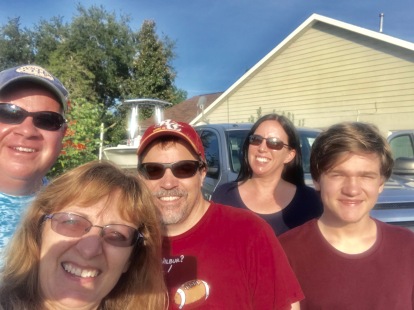 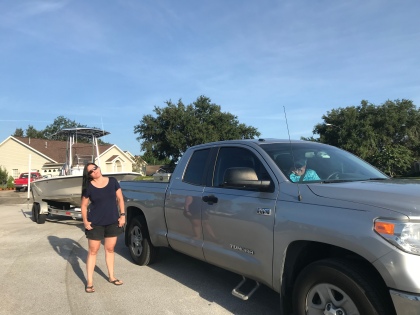 We all made reservations at The Plantation at Crystal River and knowing they were sold out the previous night, we didn’t even try for an early check-in. But……we can use their private boat ramp in the morning since we will be hotel guests today-yeah!

Connor was being ‘Joe Cool’ and watched the whole operation from a nearby chair.

When we arrived we had good weather and no storms on the radar. 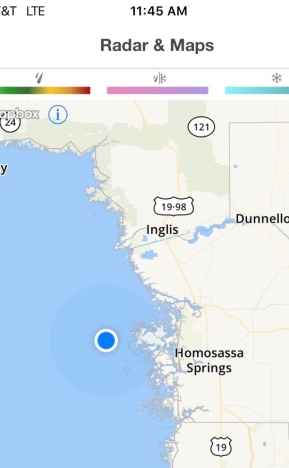 Everyone that was scalloping jumped in and Connor was the first to find one this season. 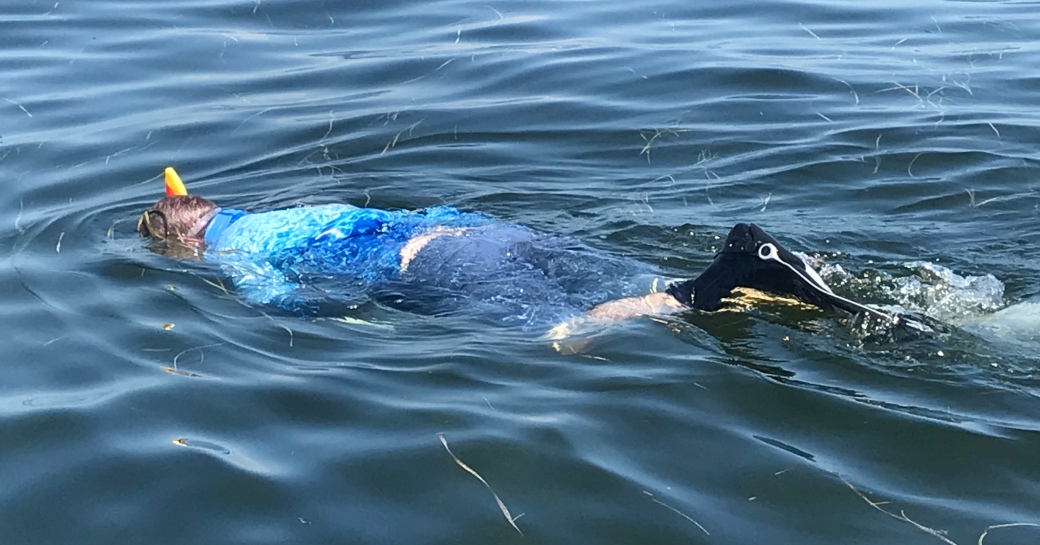 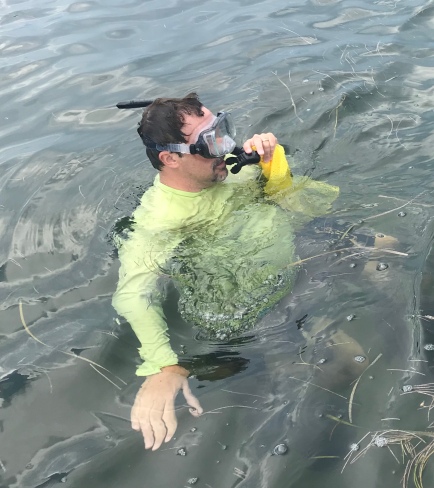 Two hours after being on the water, the radar changed (see below) and this was in our future.  Time to head in before being caught in the rain, or worse.  We were able to dodge a few pop-up showers, but this storm was always on the horizon and we had to head back up the river in between bouts of rain. 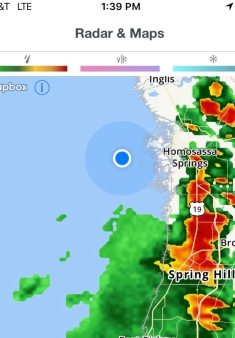 Ultimately, we found a decent amount  of scallops for our first day – about 1/2 of a 5 gallon bucket. 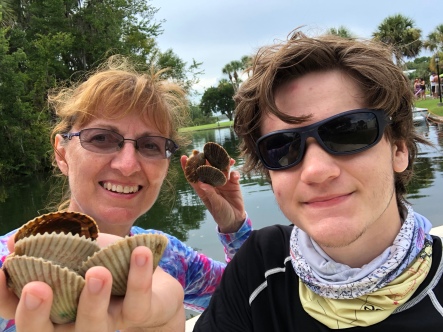 Dinner was at Seafood Seller & Cafe, a fan favorite from our last trip to Crystal River.  We knew this place would stay on our radar and we would be returning on any future trips to this area. 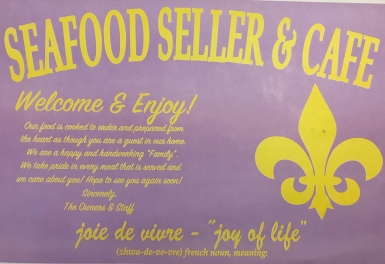 We started with several shared appetizers (clock-wise):  hush puppies, chowder, gator bites and fried tomatoes.  Can I talk about those fried tomatoes – absolutely delicious.  I think they should be called ‘fried tomato chips’.  A typical fried tomato is cut longitudinally, before being breaded & fried.  These are quartered after being cut.  They are just darn good!

We each ordered seafood entrees including blackened flounder, grilled grouper and a fried seafood platter.  These were accompanied by French fries or a Cajun side dish.

Monday dawned bright and clear and we were back on the water.  Buffs are definitely a new thing for us and Connor is well protected from the sun with his.

We needed to make a brief stop at Pete’s Pier and noticed some changes. 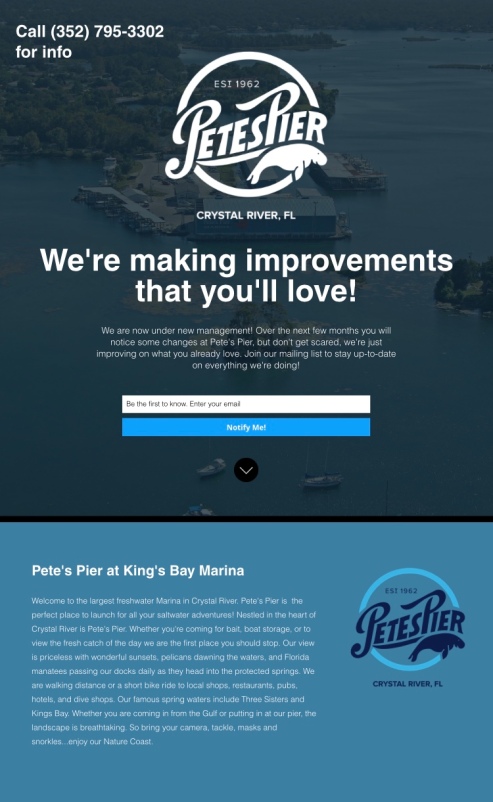 I noticed a few things as soon as we approached the pier.  Small things like dock boards had been replaced and new mooring ropes swapped out.  Not a big deal but these small improvements can truly make a difference.  Apparently this bird also thought so, ha! 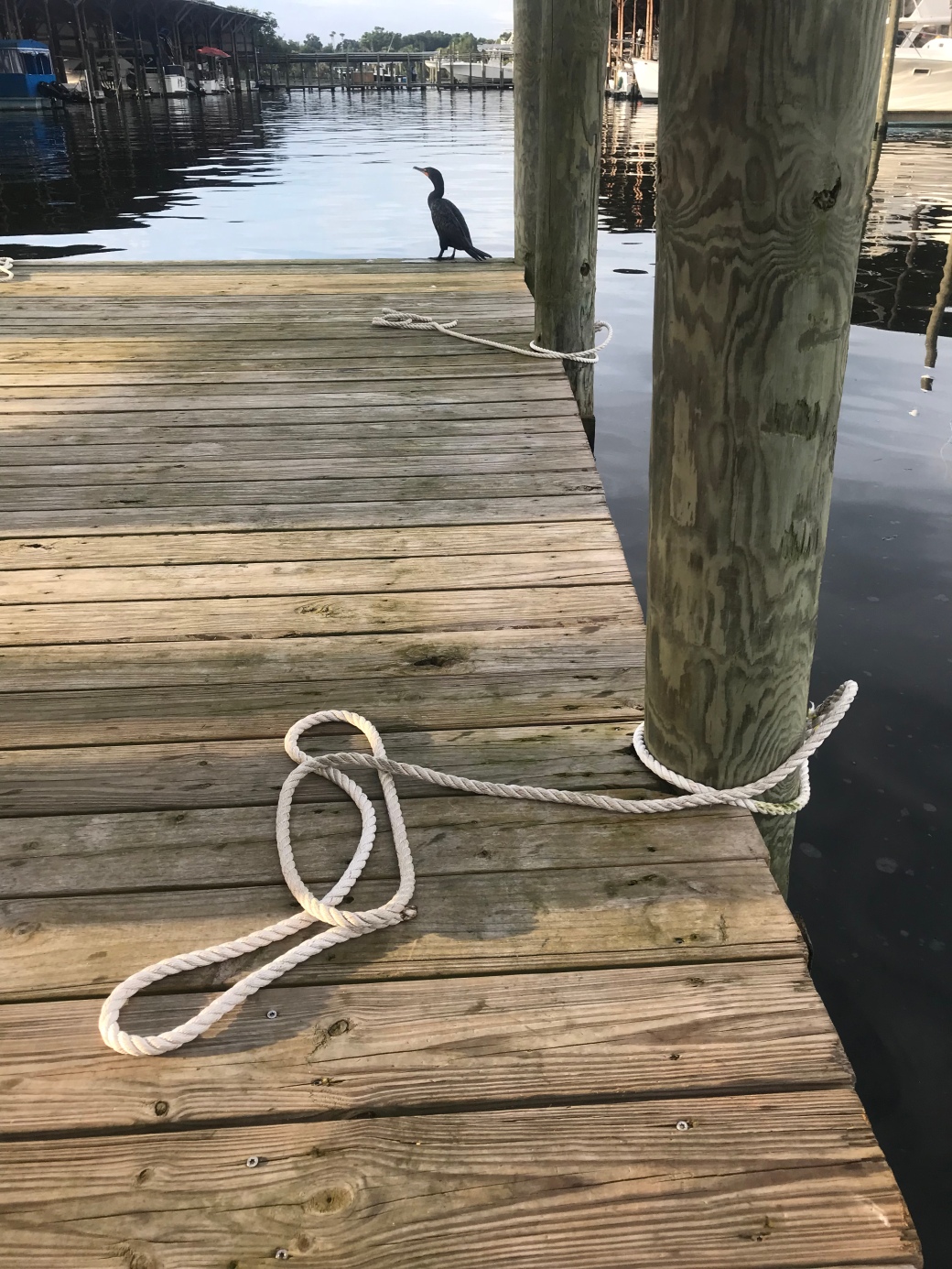 Scalloping is a total new thing for Adrienne, but she jumped feet first into this adventure.  Eric shared a few scalloping tips from his prior snorkeling experiences.   Things like (1) what exactly to look for (2) understanding the scallop’s actions underwater (yes they move, sometimes quickly) and (3) their preferred habitat.  Sometimes these little buggers are hard to find,  even when you know they’re down there.    It’s also helpful if they’re found in 4′ or less of water – but that was not to be on this trip.

After getting used to the mask and snorkel, she explored on her own and pretty down quick (!) she found her first scallop. 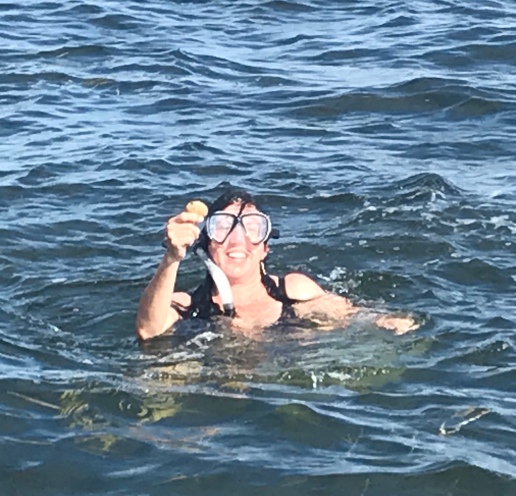 Everyone did well and was quick to show off their filled scallop bags – not like anyone was counting or anything, yeah sure.

Eventually, I got into the water, sans snorkeling gear. 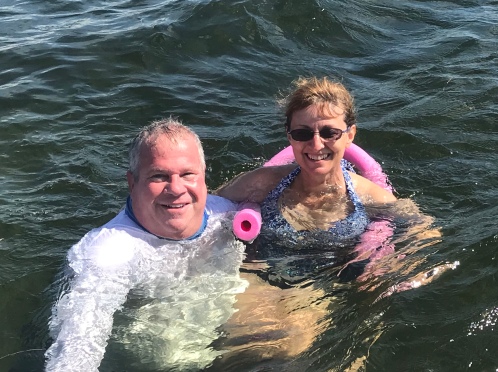 These little guys (scallops) are kind of interesting.  They move around quicker than you would think in the water, sometimes escaping from your grasp.  Also, when we’re putting them in the boat’s livewell, they get excited and start opening their shell.  You’ve got to be quick or they will pinch your fingers.

Might be hard to see, but they have blue eyes around the rim of the shell. 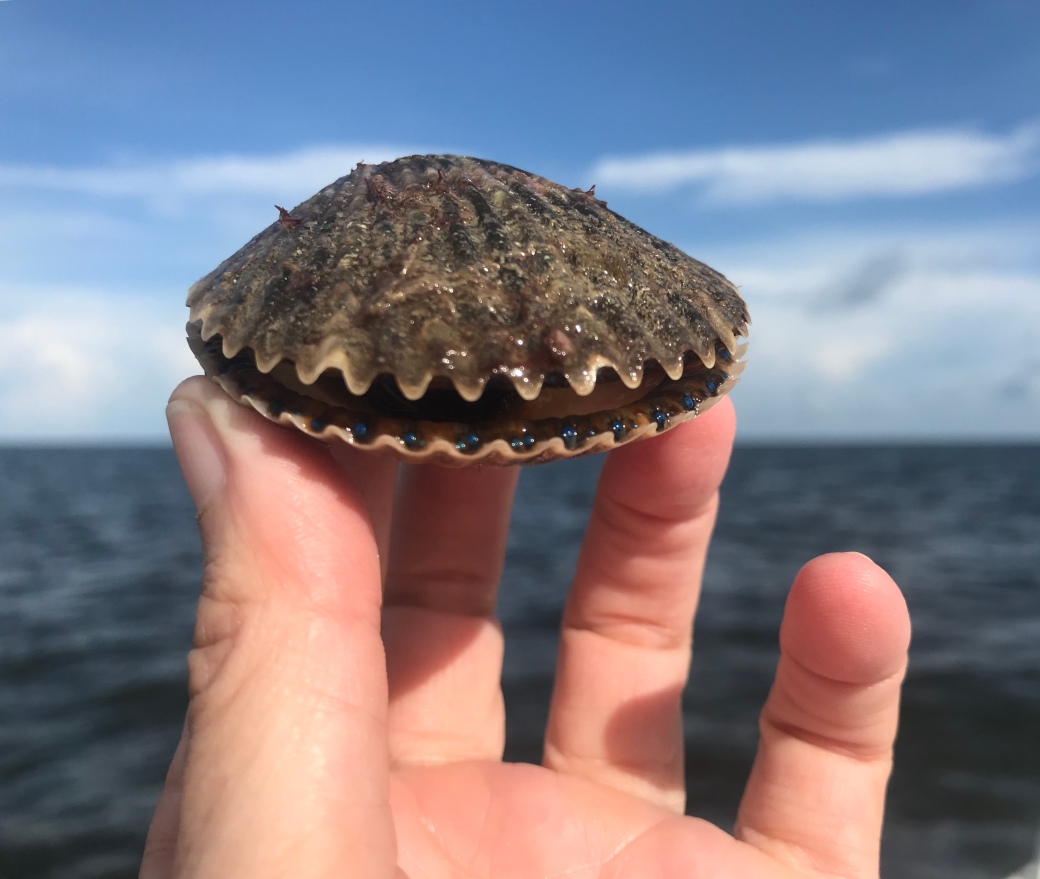 We got chased off the water again but the timing was right since Rich and Connor had to drive home this evening.   Before heading out to dinner, the guys dropped off the scallops and had someone else clean them on site at the hotel.  It’s a pretty sweet deal but it doesn’t come cheap.

It’s become a tradition to eat at Peck’s Old Port Cove Seafood Restaurant & Blue Crab Farm in Ozello, Florida.  It’s at the end of a county road, mile marker 9.5.  Another half of a mile and you’re in the Gulf.

We started with onion straws which we wolfed down – pronto.

My meal was fried shrimp, which were delicious.  Eric ordered steamed (12) crabs and it was an operation – just saying.  They come covered with a bowl and then you have the ‘reveal’.  He had plenty of crabs to share with Adrienne and Rich.

Since everyone else was finishing up Eric’s steamed crabs, Connor and I went exploring and found their crab farm on the backside of the restaurant.  There were reports of a baby gator that slithered into the bushes, literally moments before Adrienne joined us.  She has yet to see a gator while in Florida.  We’re going on 3 months since she moved here.

All too soon it was time to say goodbye.  We adjourned to the outside pool bar to pass the rest of the evening.  Glasses of red sangria were mighty tasty. 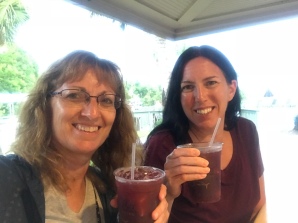 We had a great sunset – or at least the sky was an unusual shade of lavender.  The color was captivating, even if I didn’t get a dynamic photo.

Breakfast is always an adventure.  Several mornings we ate at The Olive Tree Restaurant and definitely upset the norm.  Since we arrived when it first opened,  and were the first customers, we sat at the counter.  One older gentleman arrived, looked at us and then took a seat at the counter at the end.  A second gentleman arrived and then it became obvious we had messed with their morning routine and were sitting in their ‘seats’.  When the third gentleman arrived, it started to get comical.  Regardless………..the food was good and filling.  I’ve ordered their breakfast special of cinnamon raisin French toast several times.  The second day I had their waffle – OMG x 3.  It was the best waffle ever.  Our waitress told us the cook had his own secret recipe. 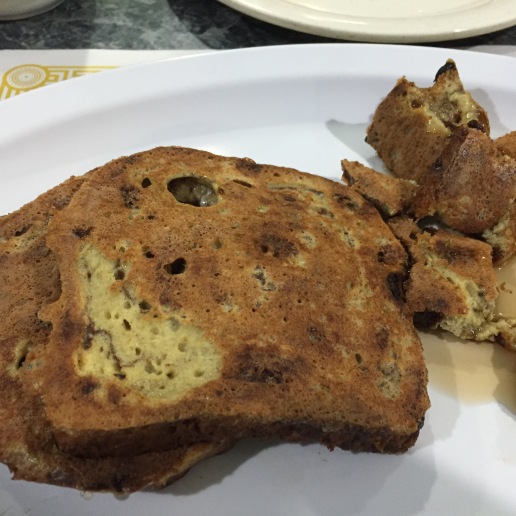 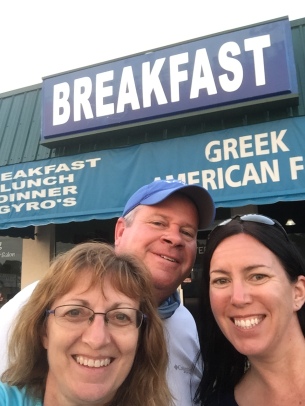 Tuesday morning we went out for scalloping and it was brutal, just brutal.  The wind was blowing 20+ knots and the current was ripping.  Between the two of them they found 14 scallops and they decided to call it a day.  It was even too windy for fishing so we headed back in to pull out the boat and head home.

Parking the boat trailer is always tricky this time of the year with so many people going scalloping.  The Resort has an adjoining empty grass lot for this purpose.  Eric wanted to be sure our trailer didn’t go anywhere while being out of sight – really, really. 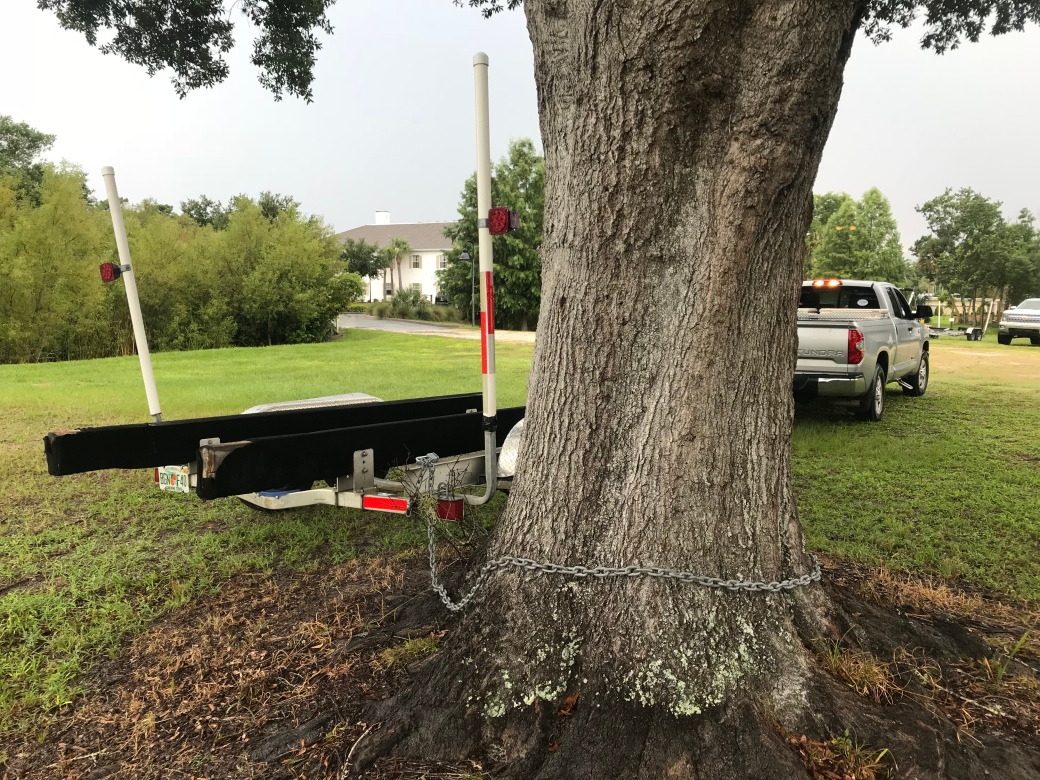 This gave us a chance to eat at Seller’s Seafood & Café one more time before heading home.  We all stayed with seafood for our meals, but added beignets for dessert (yummy chocolate and raspberry sauce came with them – delicious).

Heading back home was bittersweet since it means we have to go back to work the next day.  Adrienne stayed for dinner and we ate our scallops in a variety of ways, both raw and cooked.  I personally favor them raw and we tried them with (1) soy sauce & sriachi and (2) soy sauce & wasabi.  Both were topped with angel-hair cabbage (for the crunch).  Love them!

Another option was to eat them broiled with a red jalapeno pepper (from our garden) and cheddar cheese.

And lastly, we added them to a spicy cream sauce served over pasta.

While we enjoyed the beignets at Seafood Sellers, Eric’s were better.  He proved it when we topped off our meal with beignets at home.

It’s always fun on the water and scalloping is a unique Florida sport.  Bringing in a ‘newbie’ adds more fun for the group and inducts another person into the club. 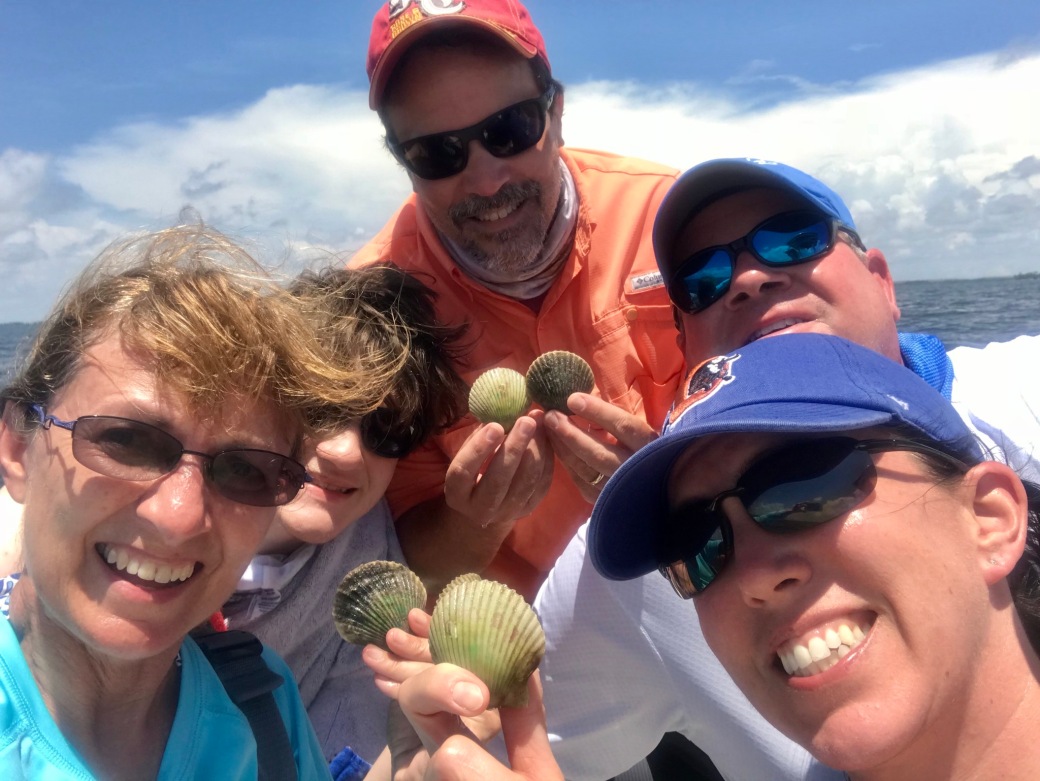 Hope we can make it one more time before the season closes!