The weather forecaster  said Sunday was supposed to be raining all day.   It was not going to be a day spent on the boat – bummer.  We proposed a day checking out some of the central Florida breweries and a good friend, Adrienne was game.

Before drinking we wanted to fuel up and Eric found The Elixir.  He googled best brew pub in downtown Orlando and this was our destination since (1) was open (2) close to the downtown area and (3) shouldn’t be full since it was Mother’s Day . 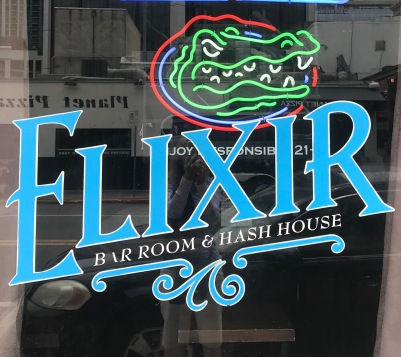 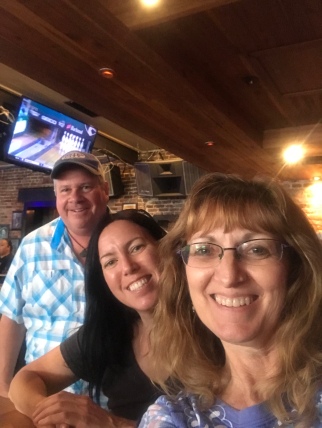 Soda (mine) and brews started our day while burgers & fries, fish tacos and pretzel bread fueled our day.

First brewery on tap was Orlando Brewing.  We were their first patrons arriving 15 minutes after opening.

Their ‘hook’ is that all of their ingredients are organic and their beers became the first to be declared “Fresh from Florida”.  In 2006 they were certified as an organic brewery, making them the only U.S.D.A. certified organic brewery east of Colorado. 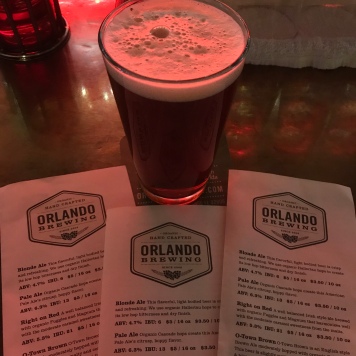 Their story interested me since Orlando Brewing first opened their doors on Gore street shortly after 2000, changed ownership in 2004 and less than 3 months in their new location…….FL Dept of Trans. was going to use their land for the new I-4 interchange, meaning they had to move again.

They used this opportunity to re-think the direction of their brewery and this meant they decided to (1)brew in accordance with the Germany Purity Law of 1516 and (2) only use organic ingredients.

Okay, so maybe most beer drinkers know about this law, but I did not.  Apparently this law decreed that only 4 ingredients should be used: water, hops, yeast and malted barley.

Part of that  day’s quest was to obtain growlers from said brew stops, as seen in the photo.

Alas, they were out of (all) brown bottles.  I guess  this means we will have to stop back by the brewery –  darn .  🙂

The idea for this brewery came from some rogue entrepreneurs looking to find a craft beer in downtown, that also quenched their thirst for unique beers.  Their brewmaster (Amanda) has already garnered quite a following after only 2 years of brewing. 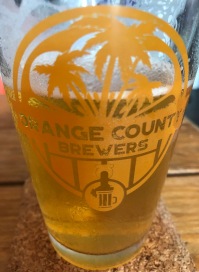 We had a flight which comes in a very interesting holder:

The cutouts were places in the vicinity of 5 Florida cities, starting top to bottom:  Tallahassee, Daytona Beach, Orlando, Kissimmee and Miami.  I can see it – kind of.

While not really hungry, the smell from the nearby pizza ovens beckoned.  Orlando Pizza & Wing Co. shares the space and  the pizza counter is run as a separate operation and we couldn’t resist the cheesy bacon bread – now really, who could. 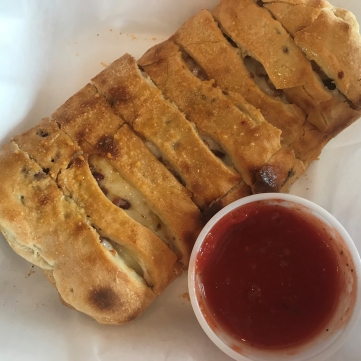 Before leaving Adrienne was able to add to her growler collection. 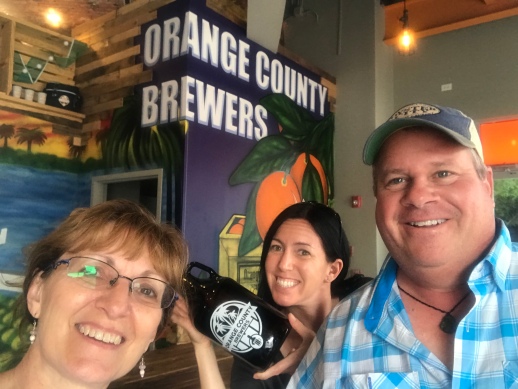 The beer was good (I liked the amber beers best) and our next visit to this brewery needs to include a meal with our brews (pizza!).

Eric and I shared a flight and I probably need to visit again  I was starting to reach my upper limits of beer.  Not from consumption mind you, just the number of brews I had tasted in 1 day. 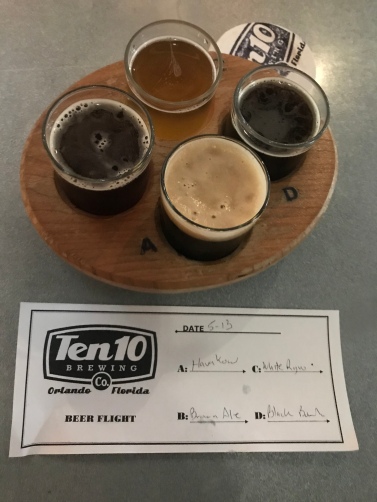 Including the 4 beers above I’ve tasted more than 13 today – yikes!  The key word being ‘tasted’.  I was able to get a decent shot of their tap list.

However, their pretzel alone would make me come back!

Warm, crusty, salty, doughy and just downright delicious.  It’s accompanied with beer mustard and their homemade beer cheese, yum.   The next time I have a craving for a pretzel, this is where I’m headed – just saying.

They have a good menu selection with several sandwiches but they also offer house-made hot dogs.  Like I said, we need to come back again when (really) hungry to fully appreciate this place.

This brewery opened summer 2015 after 19 months of planning. It’s part of the Mills50  –  an area that has a fairly new (named) identity even though  it’s been around for years.

With all of the rain covering the state we were in no hurry to head home. One last (unplanned) brewery was on tap…….Crooked Can Brewing Company in downtown Winter Garden. 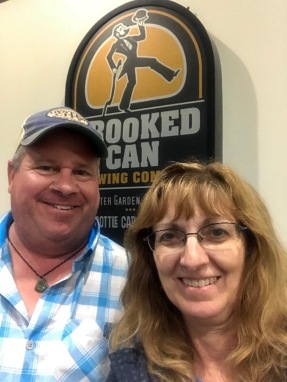 It’s located in the Plant Street Market – a local community, artisan market that has become a social gathering place for family and friends (yes, found most of that sentence on their website).  There are a variety of food vendors in this building as Crooked Can focuses on brewing beers, not cooking food.  I respect that focus.  🙂

I am so glad this BBQ restaurant has joined their line-up of options in Plant Street Market.  Our ribs and pulled pork from This little Piggy was an instant hit and I can see this as a stop on our way home when no one wants to cook………. 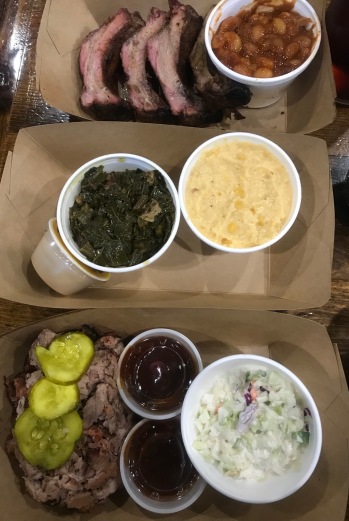 ………and Morthan Cheese (Raclette cheese from France & Switzerland melted then scraped onto your chosen base).  A salad made Adrienne’s meal seem healthy.

It was a fun day all around and while this won’t be a weekly occurance, it’s a nice way to spend a rainy day. 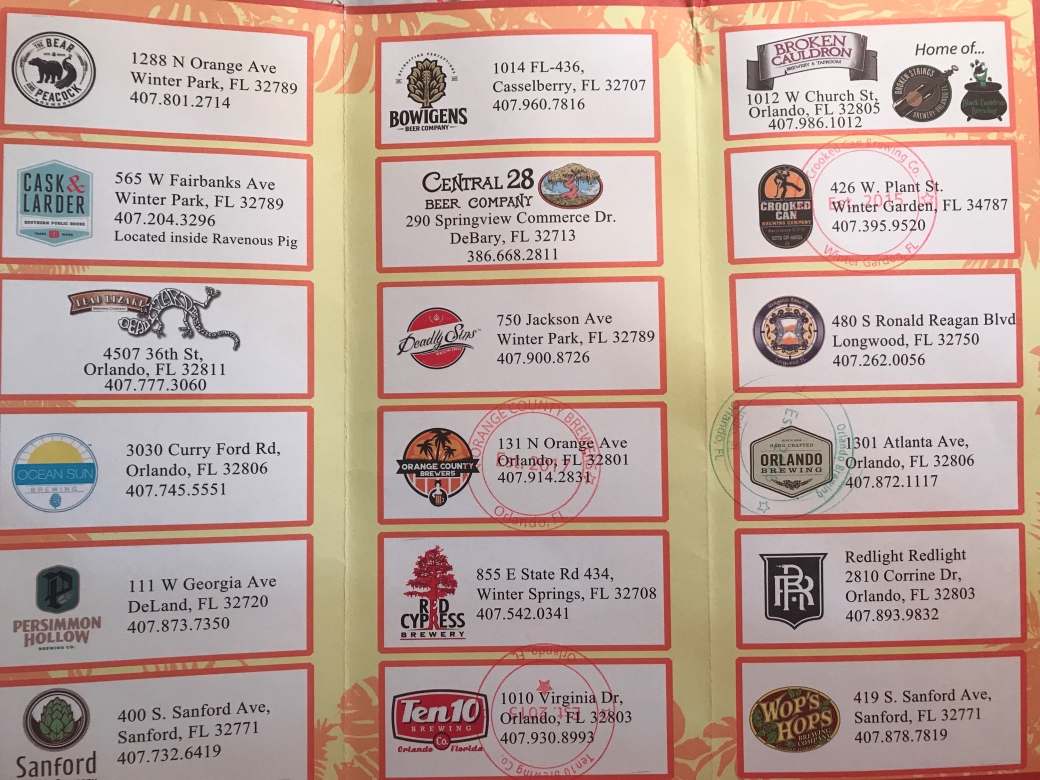