We planned a quick trip to Ponte Vedra to see Rich, Karen and the boys.  We both worked Friday and drove up afterwards.  Man – the traffic was a drag.  It was bumper to bumper for hours (well, at least it seemed like hours, and hours and hours).  We generally drive up on Saturday after work and we could definitely tell the difference that day.

The plan was to eat at their Friday Night Food Truck with friends, but the area was also celebrating Halloween and only the guys went to the Food Truck event. I ate with Karen and the boys at a local restaurant and it was perfect for us.  We stayed up talking, while the guys were out back on their porch.  Usually I’m the first one to crash and generally asleep before 11pm.  It was after midnight before I headed upstairs to our bed – probably a first.  Must be the cold air kept me awake (at least cold to me………..). 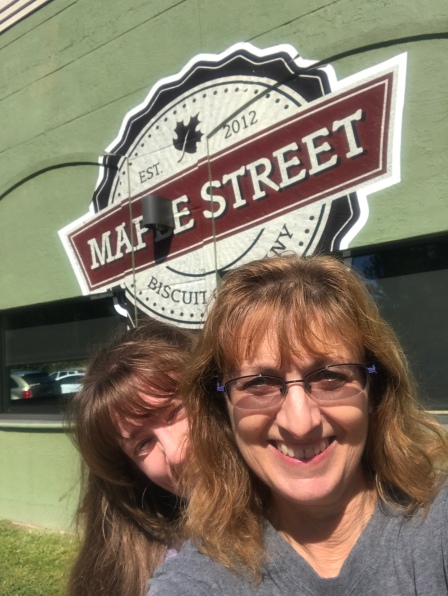 The guys went shooting Saturday morning and Eric came back pleased with his shooting.  The others participate in these events regularly and Eric does not.  Meanwhile, Karen and I sorted through our jewelry making supplies to see what we could accomplish in a few days. We took an early afternoon break and ate at the Maple Street Biscuit Company.  She had taken me there once before and on our last trip, it was closed when we stopped by.  I’ve  had a hankering for their menu ever since.  I ordered the chicken club biscuit with Ranch dressing and we split the cinnamon raison biscuit for dessert.  Their menu board looks great and I’ve got to try some of their other biscuits. 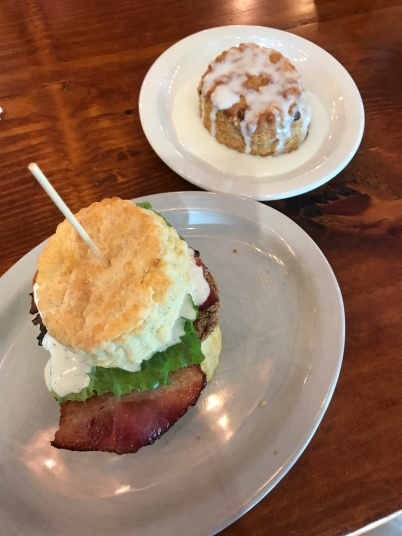 Both were might tasty.  Now that we were ‘fortified’, we headed back to make jewelry.  In the past I had only made earrings but this weekend I wanted to make a necklace.  It had to be something simple enough to complete by Sunday evening.  There are two necklaces I wear that have garnered compliments in the past.  My goal was to copy that style using a different color of beads.  Shockingly………I was able to finish two necklaces.  They are long enough to wear several ways.

Meanwhile, Karen put the finishing touches on a wrap bracelet for me.  I had thought it would be mostly worn on the weekend for casual wear, but twice this week at work I had it on.  Totally didn’t expect the second bracelet.  There had been a delay with the wrap bracelet so Karen made the other one.  It wasn’t necessary, but I love the colors. It is different from any of my others,

Monday, the kids had to go to school, Rich had to sign-in from his home office and Karen went to work!  She got a job at the end of the summer, setting up a new Hobby Lobby store and has continued to work their inventory deliveries.  She’s tried to quit several times and they won’t let her.  It’s pretty cool that she sees all the new things that are arriving and also set up her own Merchandise displays.

We packed up and searched for a breakfast spot before the drive home.  Lo and behold, we found a place in St. Augustine called  ‘The Spot”.

Its small, serves down-home food and at 10am wasn’t too crowded.  We sat at the bar to fully soak in the ambiance.  The coffee mugs were typical of a diner………..

……advertising every business, but their own.  Eric ordered a Southwest skillet with fried eggs, salsa and chili that topped breakfast potatoes.  I ordered the (half) order of sausage gravy & biscuits, topped with two fried eggs  (you can’t see the eggs for the grated cheese – more calories, groan). 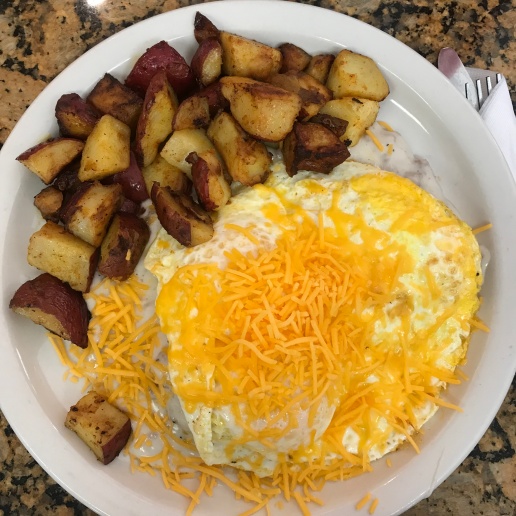 Once again we headed south and came across a seafood market – Kyle’s.

Their seafood was fresh and their mullet smoked in-house.

Later that night we had the shrimp for dinner. It was combined with some veggies and a tomato sauce.  Each of us had a different version of the shrimp recipe.  Mine included chunks of avocado and his had cilantro added (yuck).

As an appetizer before the shrimp, Eric took the smoked mullet fillets and made a <delicious> seafood dip.  Sorry, no photo, not a lot of color in fish dip. 🙂

It was a great weekend trip.  Loved the cooler temps which gets us ready for Fall to arrive, with the bonus of being with our good friends.