We had some amazing meals during our three days in Luzern.  Since we got in late our first day, we made plans to eat at our hotel’s restaurant.  I wasn’t really expecting much, but since it sits along the river walk, it is popular with visitors. 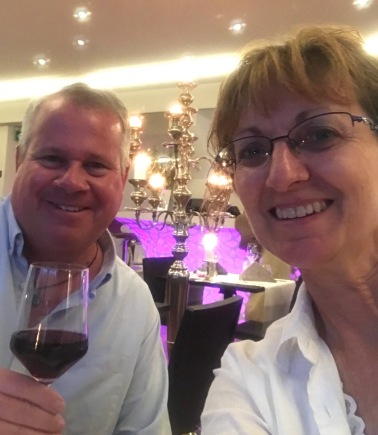 While the lemon-pepper shrimp tagliloni that I ordered was very good, Eric’s dish was much better.  He ordered Swiss rosti with cheese & bacon.  As you can see in the photo below, it also had a fried egg on top.  The runny egg yolk gave an extra gooey-ness to the dish.  I kept sneaking forkfuls of his meal.

Breakfast each morning was at the hotel since it was included with the stay.  While it was nothing to write home about (or take a photo),  it hit the spot and didn’t encourage us to over-eat.

Which allowed us some excellent lunch-time meals.  With all the French eating we had done in Lyon, Luzern called for something different.  Since the German influence is so great, I had a craving for brats and sauerkraut.  Just down the river walk from our hotel, we found the Rathouse Brewery and a nice German-style meal.  Eric’s plate is on top and included a German potato salad with cucumber slices. His sausage included beer from the brewery.  My sausages were made locally in Luzern by an artesian butcher.  It satisfied my craving perfectly.

Saturday night’s dinner was at Wirtshouse Galliker.  Eric had tried to make dinner reservations before arriving but had no luck.  We talked to the front desk and we had a 7pm time – which was extremely lucky.  All kinds of people walked into the restaurant while we were there and unless you had a reservation you were kindly showed back out the door.

The interior hadn’t been touched since the 1930s and it had a very warm, homey feel, with primarily communal dining tables.  That was great for us!  The menu features all the goodness Luzern has to offer with recipes from your Swiss grandmother’s grandmother recipe file. Eric began with a ‘starter’ of bone marrow.  He said it was delicious.  No surprise, I didn’t taste it.  He spread the marrow on brown bread that accompanied the meal.

We sat next to four ladies that were old friends and having dinner before going to a play at the nearby historical museum, which turned out to be a very good thing for Eric.  His dining neighbor had deer stew and it was not found on the English-version menu.  When our order was taken, he said ‘I want what she ordered’, pointing to our new friends.  Along with the meat, there was braised chestnuts, braised cabbage, baked apple with a dollop of current jelly and the potato ‘rosti’.  Eric said it was ‘as good of any venison he had ever eaten’.

I also had a delicious meal with a pork sausage, surrounded with  brown onion gravy and the potato swiss ‘rosti’.

The potatoes might just look like fried hash browns, but these are much, much tastier.  The potatoes are fried in clarified butter on both sides before being served.  Let me tell you that while it was very good on  its own, add in some of the brown gravy and it was more than fabulous!

Lunch on Sunday was in the Swiss alps!  There is a hotel on top of Pilatus and we planned our day to be at the top around lunch-time. There were several places to eat, some more like grab-n-go places, but we wanted more. 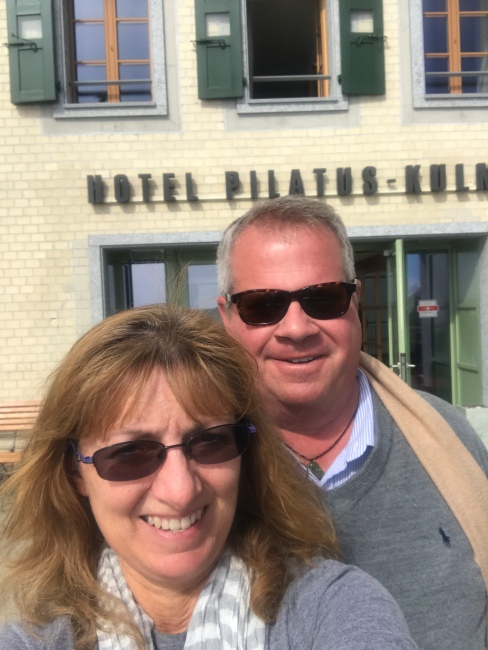 Eric started with swiss barley soup.  It was good, hot & hearty.  Definitely a great choice when in the alps. 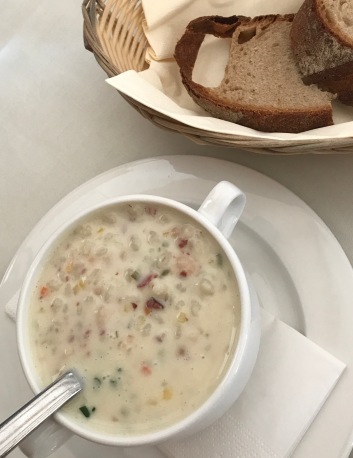 Eric ordered fish & chips for his meal and the home-made tartar sauce was amazing – it raised the level of the meal.

I got a pork cordon bleu and the meat was fabulous.  When you have pork, stuffed with more pork (ham) and melted cheese – how can you not love it.  🙂  The veggies were added to make it more ‘complete’ but suffice to say, most were left on my plate. 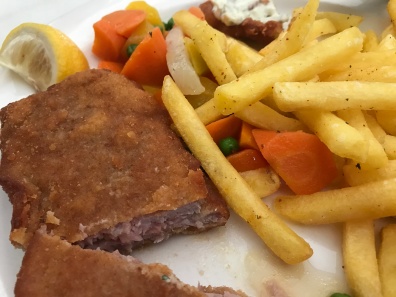 For a change of pace, we had two different Swiss ciders with our meal. 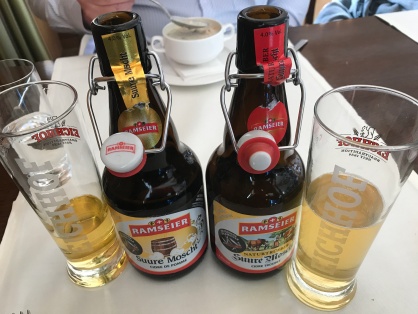 Sunday night’s meal was traditional Swiss.  There was a nearby place called Zunfthausrestaurant Pfistern.    Centuries ago (1400s) this was the meeting point for the guild of bakers, millers and sailors.  Today this cooperative is where Swiss people come to eat Swiss food.  Every current guild member has their own family crest which decorates the wooden walls of the restaurant.  While there are no communal tables, they crammed as many seating places in the restaurant as possible.  They were mere inches separating the groups that were dining.

Eric ordered a traditional Swiss fondue that came with bread and potatoes.

I ordered a Swiss rosti of which this recipe called for potato slices, topped with bacon and a fried egg with lots of cheese.

It was great having ‘german’ food without going to Germany.  Almost every day we had ‘rosti’ and as can be seen, each restuarant uses the same ingredients, yet the end result looks a bit different.  It doesn’t matter – they were all good!